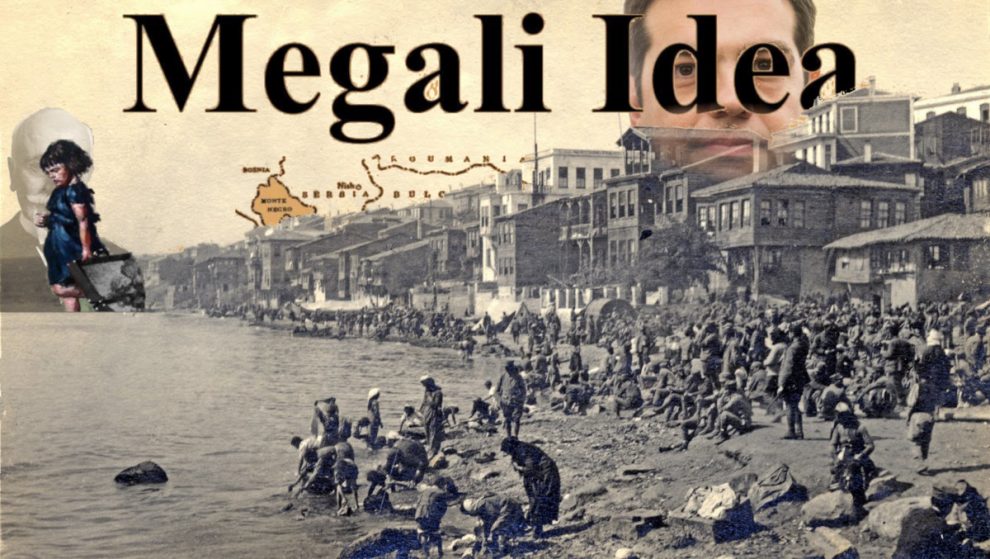 The famous Turkish author and educator Halide Edib has this epigraph from A. H. Lybyer in her legendary memoirs:

Albert Howe Lybyer (1876-1949) was a scholar of the history of the Middle East and the Balkans, who held teaching positions at Robert College in Istanbul at the beginning of the 20th century.

Halide Edib observed the destruction, toil and tear on both sides when the Turks pushed the Greeks from Anatolia that their “Big Idea” had brought them to. The Megali Idea, an irredentist concept of Greek nationalism that expressed the goal of establishing a Greek state in the Southern Balkans, Anatolia and Cyprus. Not only had that great, and stupid, “idea” brought the Greek Army to Anatolia. It was the “great” powers who convinced the poor Greek people in realizing that idea. The British did it by not delivering the two dreadnoughts the Ottoman government had paid for to the Turks but donating them to Greeks. British Prime Minister David Lloyd George did it by promising Greece territorial gains at the expense of the Ottoman Empire as early as 1917. President Wilson did it by declaring Turks should have rights on only their own territories not all the Ottoman lands. Wilson encouraged the Greeks to occupy the “Zone of Smyrna” to protect the ethnic Greek population living in Anatolia. The U.S. Navy and commercial vessels carried Greek troops across the Aegean Sea.

The Greek government used to call the campaign simply the “East Front.” It was promised to be a fast and quick operation since the Ottomans had lost everything and the tired and angry Turkish peasants could not organize an armed resistance. However, to the chagrin of all those “great” powers, in 1922, the Turkish army under the command of Mustafa Kemal Pasha (Atatürk) was beginning to launch its great offensive. Halide Edib was now one of the sergeants in that army. Greek morale was faltering because the Allies had abandoned the Greeks. The Turks pursued the retreating Greek soldiers to İzmir. The Greek army carried out a scorched-earth policy while fleeing from Anatolia. Middle East historian Sydney Nettleton Fisher wrote: “The Greek army in retreat… committed every known outrage against defenceless Turkish villagers in its path.”

Halide Edib and many other journalists had recorded that the Greek officers tried to convince the local population in the areas they occupied that the British were behind them, and soon all their villages and towns would be as “modern” as Britain.

Instead, in two short years, the Greeks left more than 50,000 sons behind in Anatolia. Those “great” heads of Europe had not even lent a ship to carry the surviving Greek soldiers back to Athens.

I remembered that such dark pages of history now because of the new term “East Mediterranean.” Similarly, the “East Front” was as far away from Athens as the “East Med” is to Greece. If anything, it should be the people on the northern and southern half of Cyprus negotiating how they are going exploit the energy resources in the Eastern Mediterranean. They should be getting together with the closest neighbour, the Palestinians in Gaza, and forming alliances to utilize the energy potential of the region.

No! Once again, another Athenian politician Alexis Tsipras is pushing the poor – not as a term of endearment but as an economic fact – Greek people into another adventure. Like the first Athenian Eleftherios Venizelos’s plan, Tsipras’ plan seems to be based on a scheme designed by the “great powers.” Prime Minister Tsipras says, between the lines, that being part of the Israeli-Egyptian gas deal would give the Greeks of the mainland and Cyprus enough clout to scare the Turks off.

He should read the warnings coming from the Turkish side. The message between the lines reads “Mikro-Asiatiki Katastrofi,” or Asia-Minor disaster.

Is this a threat? No, it is only a fact! Alexis, the Italians have already left your so-called exclusive economic zone Region 6.