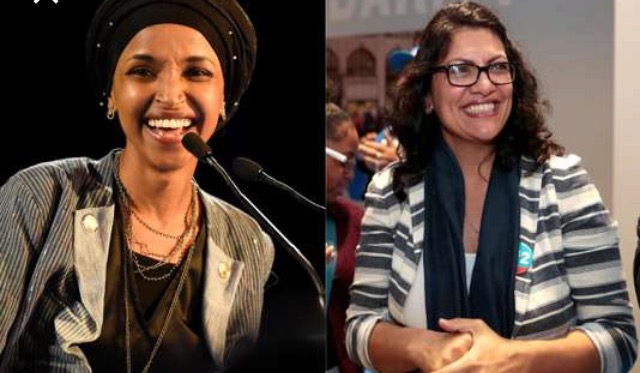 Congresswoman-elect Ilhan Omar wouldn’t even be elected for her classroom President because of her Islamic veil, though it looks like Simone de Beauvoir turban.

Tuesday’s U.S. mid-term election marked a distinct turning-point in American politics as voters went to the polls to elect or re-elect the entire House of Representatives and one-third of the Senate. In an America divided as never before, it served as a referendum on President Trump’s two years in office; more to the point, it registered a compelling backlash against him and his evangelical right and far-right white American base.

Thus the outcome of this election one could call a draw, neither a semi-victory for Trump nor a rebirth for the Democrats. Certainly It will be an odd cohabitation in the capital because the Democrats are going to be aiming for 2020 while searching for the ideal candidate to challenge President Trump; meanwhile, he will continue in his aggressive rhetorical style.

The exciting results of this election were all the more significant in President Trump’s America, given his social and societal public policies which are anything, but inclusive and welcoming.

His travel ban on Arab and Muslim countries, including Somalia, and his decision to transfer the U.S. Embassy to Jerusalem helped in some degree to galvanize Arab and Muslim candidates and voters. President Trump’s xenophobic statements underscored the anti-Arab & Muslim sentiment in the U.S., but the reaction against his rhetoric encouraged many to vote en masse.

His tactical position on migrants and anti-immigration pushed numbers of women of colour, ethnic, and religious background to run for Congressional seats in their respective State districts. Claiming Congressional seats include Ayanna Pressley in MA, Alexandria Ocasio-Cortez in NY, Rachida Tlaïb, MI, and Ilhan Omar, ME, winning under the rainbow flag of the Democratic Party, mostly in rebellion against Washington’s political and money machine establishment.

The election of these women, notably those with Arab and Muslim roots, have put more ingredients in America’s salad bowl recipe — a narrative that draws an easy parallel with France’s purist beurre blanc sauce.

Ms Farida Amrani of Moroccan descent was unknown to the public until the 2017 French Parliamentary election that pushed the ex-lefty controversial Premier Valls to the edge of Essonne County (91) politics. Ms Amrani is a City Council member of Évry and a candidate for LFI (France insoumise) Party ticket in the partial legislative election to replace former MP Valls.

The election will take place on 18th and 25th November. C-01-91. Following the American election results, Ms Amrani tweeted her congratulations to the newly elected American Congresswomen of colour and faith for their historic victory, “Congratulations girls!”

Her political background and militancy, however, are not based only on her ethnic and religious elements, she argues. Nonetheless, young Arabs and Muslims are not interested in politics; the political consciousness is not the same within the Arab and Muslim community as it is with the French white groups; when the unemployment rate is chronically high among the community members, and the majority of them feel marginalized and stigmatized, politics is far from being a hobby.

Locally, people in the so-called les cités in France voted massively in the 2017 presidential and legislative elections, measuring the impact of Ms Le Pen’s election to the Élysée Palace on their daily life in terms of racial profiling, tough policing policies, and harsh policies towards immigration and migrants. Yet the majority of the young who voted in 2017 are saying: “don’t count on us in the next elections,” Islam, a French-Algerian engineer for EDF (French National Electricity Co.) from Le Raincy, (93) told ADN.

A prevailing attitude shared in the Arab and Muslim community reflects a parallel with their fellow Arabs and Muslims in the U.S. As a heterogeneous population divided because of their country of origin, they are not well organized, don’t volunteer to help their candidates, and don’t contribute to the candidates’ campaign fund. As Ambassador Maalouf told ADN.

In the U.S, however, candidates are less haunted by their colour and religion, in this stance, Congresswoman-elect, Ilhan Omar — in France, she wouldn’t even be elected for her classroom President because of her Islamic veil, though it looks like Simone de Beauvoir turban!

The post-Paris and Nice terrorist attacks made the question of religion and race thornier, the media and the politicians capitalized on it a great deal, tarnishing furthermore the Muslim religion, and portraying the banlieue and its dominant majority Arab and Muslim inhabitants as the “bogeyman” of France’s social cohesion. Even ‘Le Monde’ newspaper got trapped in this silly equation, its journalists labelling the Seine-St-Denis Dept. (93), a suburb in the northeast of Paris, as the hub of “Islamization” and alarming the public, the authorities, and the xenophobes of the “French malaise” in Neuf-Trois County.

In France, religion is a personal matter and doesn’t have to affect the white population in its “art & manner” daily life, or the bankrupt politicians (right and left alike), and the ignorant media, its Sacred Cow. Though the Republic Interior Minister (the equivalent of Homeland Security Secretary in the U.S.) is also the religious affairs.

The issue of religion and its practice has been a major problem in the French electoral process for minorities, particularly for women who are seeking to advance. Despite the

few active women who are city councillors like Ms Amrani and tens of others, there are only a few MPs. There are active Muslim women who are carrying the message of integration, defending the Republic values, but their Islamic veil is considered an ideological barrier.

Dr Souad, a French-Egyptian dentist in the Empalot neighbourhood of Toulouse, is very active in her community on societal issues that are making headlines in the media and politicians’ public speeches are an object of her focus, she told ADN. Yasmine, a young linguistic student at Le Mirail University, Toulouse, is also a community organizer and a syndicated student, who addressed the campaign smear directed at Ms Maryam Bougetoux, a University Student Union President (UNEF) last Spring. Ms Bougetoux faced derogatory critics from the corporatist, feminist, and the Muslim and Arab assimilationist women, as Yasmine put it.

Their wish is to get elected one day and enter Palais Bourbon, the French Parliament, but neither of them is ready to give up on their belief to assuage the Republic. Dr Souad continued: “if [they] want us to get involved, why don’t [they] look at the American integration process, and let the French dream comes true, like in the U.S.”

Unlikely to happen in France, where the French political system, the Parisian intelligentsia, and the feminists prefer “Marianne” unveiled.

For Ms Amrani, religion should stay out of politics, and her voters shouldn’t focus on her religion. She insists that the youth in the banlieue should go to the polls to make their voice heard as the Arabs and Muslims and African-Americans did in the U.S. mid-term election and score a victory like Congresswoman-elect Rachida Tlaïb of Palestinian heritage, and Congresswoman-elect Ilhan Omar, a Somalian refugee, who are making history and thus writing the immigrants’ story in American political life.