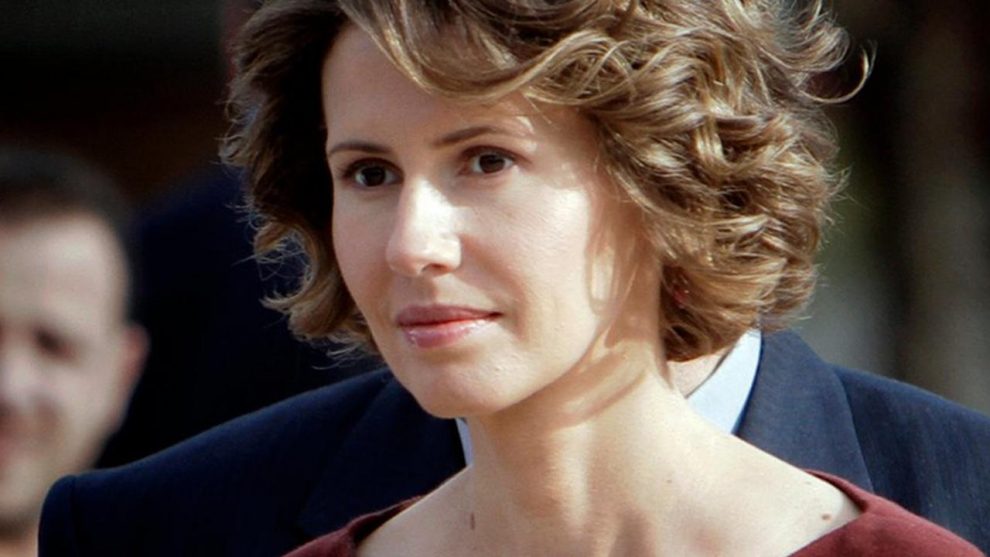 I was shown an old photograph the other day of a couple of children messing around in a paddling pool in the back garden of a pebble-dashed suburban home in Britain. It was a hot summer’s day in the 1980s and the childhood innocence radiating joy and happiness from that snapshot would melt the hardest of hearts. Children at play, displaying both wonderment and mischief, can make anyone smile because there are very few of us immune to being charmed and captivated by the purity of little people immersed in fun.

This photograph, capturing a few moments of unbridled joy, made me smile for all of the above reasons; and then I wanted to cry, because the little girl splashing around in the paddling pool is you, Asma. You clearly had something now being denied to the children in eastern Ghouta and the hundreds more being held in your husband’s torture dungeons; you had a childhood, a sweet, innocent childhood where you were allowed to enjoy the simple pleasures of growing up without fear or constraint.

Have you descended so far into Hell that you can no longer remember that day in the back garden of your home in West Acton, a West London suburb about a fifth of the size of Eastern Ghouta? Or, like the glowing 2011 profile of you in Vogue fashion magazine, has the memory of childhood innocence been completely erased?

As the wife of the Syrian dictator Bashar Al-Assad, I’m curious about how you can look back at your own childhood while cheering the destruction of so many others? Your husband is a man with blood on his hands; his regime has murdered hundreds of thousands of Syrians, mainly innocent civilians and including many children and their mothers. Their childhood — unlike yours, Asma — has been stolen from them in the cruellest ways possible.

Your father, meanwhile, is an eminent London heart surgeon who has devoted his life to saving others, in stark contrast to the man you chose to marry, who is preoccupied with crushing the lives of millions more. Sadly, we know that you have cheered the regime on as the carnage, destruction and slaughter played out in Syria. We can thank those who leaked your emails for revealing more about your character and the relationship you have with your husband. Unlike your younger self in the paddling pool, you are no longer an innocent bystander. The blooming “Rose in the Desert” portrayed so flatteringly by Vogue has long gone and you have morphed into the First Lady of Jahannum.

Speaking in a light west London accent to Russian state-backed Channel 24 TV in 2016, you talked about your “pain and sadness” caused by the war your husband unleashed on his own people seven years ago. You gushed about “honouring our word” and proffered equally impressive soundbites acknowledging “unprecedented” suffering on both sides. However, as you gave that interview, your husband was unleashing barrel bombs on the civilian population of Syria. Today, more of those hateful bombs are dropping on what’s left of the hospitals and homes in Eastern Ghouta. The children there have for the past seven years known nothing but the sound of gunfire; the terror of missiles hitting their homes; the panic caused by chemical attacks; and the constant fear of the deadly barrel bombs.

Today, your husband’s forces launched a ground and air attack on Eastern Ghouta only hours after the UN Security Council voted unanimously in favour of a 30-day ceasefire. As I write this open letter to you, reports are coming in that the regime — of which you are part — is fighting opposition groups along multiple fronts in the rebel-held enclave while your husband’s warplanes continue to shell the besieged area for the eighth consecutive day. Please Asma, think of the children trapped inside Eastern Ghouta. Not one of those innocents has ever experienced the simple pleasures of splashing around in a plastic paddling pool. Indeed, all have been robbed of the sort of childhood and life chances that your parents made sure you enjoyed, allowing you to study French and computing at King’s College in London before working as an investment banker in New York.

Having met Bashar Al-Assad while he was training as an ophthalmologist in London, you met up again in 2000 and were married in secret after he became President following his father’s death. Today, believe it or not, few accept that you have no idea what is going on under your husband’s regime. Living in Damascus, as you do, you’d have to be blind and deaf not to see and hear the bomb attacks and resultant plumes of acrid, black smoke rising from the suburbs of the capital.

You continue to enjoy your lavish parties in Damascus while many of your people are starving. Fatwas have been issued allowing them to eat cats, dogs and other animals once considered haram, simply in order to survive; what was haram — forbidden — has now been made lawful for them in their awful predicament.

The massive presidential palace dominating Mount Mezzeh in west Damascus where you and your three teenage children live when they’re not in a heavily guarded and fortified house in the leafy district of Malki, stands undamaged. Yes, Asma, you keep your children safe and that is your duty as a mother, just as your mother kept you safe and protected you during your childhood in London.

The women of Syria deserve equal rights in this respect too, as mothers who want to raise their children safely and give them a childhood that they can also enjoy. Have you travelled so far down the path to Hell that you can no longer remember your own innocent upbringing? The children in Syria have suffered enough at the hands of your husband’s brutal regime and your continued support of the monster you sleep with at night speaks volumes about what you have become.

If there’s one ounce of humanity left in your soul, Asma, please speak out and help bring an end to the killing and slaughter of your people and their children. Remember the sweet innocence of the child in the paddling pool, and then look in the mirror beyond your perfectly coiffed hair and flawless skin. Who, or what, do you see?