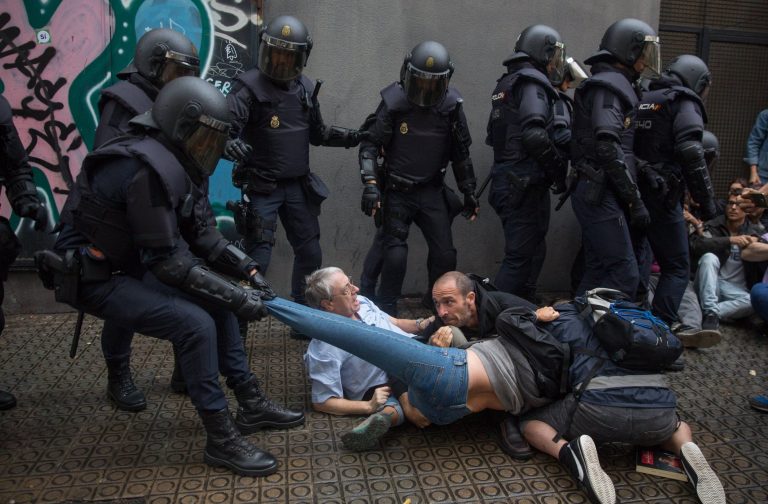 The referendum organised by the Catalan separatists on Sunday and the Spanish government’s response to it will go down in the annals of history as the collapse of the European Union dream.

Spain has been attacking Catalonia for the past two weeks as though it’s been preparing for war. Tanks have been deployed and the police presence has increased.

During the morning of the referendum we were presented with chaotic scenes where ballots were seized forcefully, the officials protecting the voting booths were beaten by police officers, plastic bullets and sometimes real ammunition were used to disperse the crowd of voters. We saw voters being thrown off balconies and beaten to a pulp.

After this incident, the Prime Minister of Spain Rajoy delivered a statement in front of the cameras where he said with a straight face that the referendum was not legal and as such they were responding within the bounds of the law.

The Spanish Civil Guard said that their response to the incident was proportionate and would not disturb “normal” citizens’ daily activities.

The President of Catalonia Puigdemont did not budge and declared that they won the right to become a republic and that they would present the outcome of the referendum to the Catalan Parliament.

What do you think was the response of the European Commission, which had in the past continually threatened Turkey for its struggle against terrorism?

“The Catalan referendum was illegal” and that their internal affairs should be managed in full respect of the Spanish constitution. The released statement ended by asking for unity, not division. What’s more is that the statement openly declared European Commission’s trust in President Rajoy’s leadership.

But of course, you should continue to believe in the myth that Europe is a saint, son!

**This article first appeared in Sabah at the following address: http://www.sabah.com.tr/yazarlar/hilalkaplan/2017/10/03/senin-avrupan-bir-melekti-yavrum
It was translated by Fatih Ismailoglu.