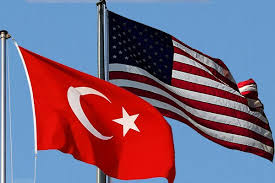 A few days ago, Steven Cook, known for his staunch opposition/enmity to Turkey, wrote in an article that USA and Turkey were not actually allies. According to him, not only during Ak Party era but also in the past Turkey created obstacles to American interests. So, he claims relations must be severed and more pressure on Turkey should be put. Cook, who professionally disguised American side’s hypocrisy against Turkey, was actually right.

It will be enough to reconsider Turkish-American relations by just looking at what Americans did to Turkey recently. The PKK/YPG (whose name was changed as SDF by US forces) got Raqqa, so-called capital of DAESH, with US air support. Normally SDG is not strong enough to seize Raqqa. Surprisingly (or not surprisingly), DAESH withdrew from its capital without resisting. The PKK/YPG celebrated its victory by hanging a huge picture of Abdullah Ocalan, imprisoned leader of PKK, to main square of the city.

Whilst US government argued that SDG is not affiliated to the PKK, both YPG and PKK continiously acknowledged that they are the same group. One can expect USA to be ashamed as its lie was unveiled.Yet, they don’t look ashamed and still continue to base their policies on lies.

I think these behaviours stem from lack of morality and honesty. Besides, it seems that rationale is also missing. Therefore, they may not give logical answers to following questions; If Turkey and USA are friends, why doesn’t USA side with Turkey against PKK? Doesn’t US’ being a friend of the PKK mean its being an enemy of Turkey? If two countries are still friends, does this mean that Turkey and the PKK are friends, too? American help to the PKK hurts Turkey. If Turkey hurts the PKK, will USA be hurt simultaneously as well? What if Turkey and the PKK made peace? Does this mean they both become enemies of USA? If three become friends then, why didn’t USA support peace process? There is also another question which we could not find an answer; if US friendship is like that, how would be its enmity?

If we get back to morality again, we can argue that US friendship is based on interests. If you make them pass through a morality test, they would probably say morality has different meanings for individuals and for states. Hence, while US judges Turkish politicians and businessmen for making trade with Iran, it supplies thousands of trucks of weapons to a terrorist group which is enlisted in its terrorist groups list.

I think this lawlessness comes from Western philosophy which asserts that “those who are powerful are right”.  Unfortunately, USA and Europe design their international politics according to this principle. They don’t care which side is right when they have to support one. They just care what benefit they will get by supporting either side. For example, US alliance with the PKK is based on this principle. They conquered Syrian territories by using its proxy, the PKK. Now, they have a de facto state in Syria. Probably, they may move Incirlik base to Northern Syria in a few years.

What is weird is that they still accuse countries like Turkey of supporting terrorism. When Turkish President Erdogan hit their hypocrisy to their faces, they got angry and blame him for being anti-Western. Actually, Mr. Erdogan can turn his face to them but I am sure he doesn’t know which of their faces he will face. In addition, it is not easy to look at faces which became black due to their sins.