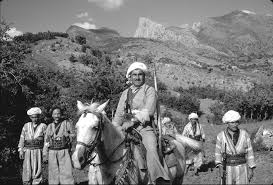 In the Middle East, we all love to start scolding someone with the words “I told you so…” If the person you told this is the leader of an honorable, hardworking and reputable Kurdish brother or sister of yours, and what you told him was as deplorable as losing their hard-earned democratic, economic and cultural autonomy, you should refrain from doing so. Instead, you should help him and your brothers and sisters fooled by their leader who himself had been fooled by Westerners (one hundredth time), mend their ways and learn from their mistakes.

President Masoud Barzani should have looked at his Baghdad-provided ID card and seen the word “Mahabad” in the slot designated for the place of birth. Then Qazi Muhammad and other Kurdish leaders were pawns in the hands of the Soviet Union against Allied Forces supporting Iran, a handful of Kurdish intellectuals and tribesmen who declared independence and created what was called the Republic of Mahabad. How long did it survive? 10 months. When the Soviet Union had no use for a client state in the region, they stopped supporting the Kurds; and the republic was destroyed by the Iranian government.

Later it was the turn of Barzani’s father, the late Mele Mustafa. This time the Western powers were supporting Kurds against the Soviet Union, which was trying to use Iraq as a springboard in the Middle East. Supported by the U.S., Barzani’s Kurdish Democratic Party revolted against the Baathist regime. It lasted almost 10 years; and later the findings of a U.S. Congressional Commission confirmed that the CIA was only interested in the Kurds to wear down Iraq and had no intention of supporting Mele Mustafa’s independence dreams.

Masoud Barzani, having spent his youth in exile with his father in Virginia, returned to Iraq 12 years later. Following the U.S. invasion of Iraq and Saddam Hussein’s defeat in 1991, U.S. forces established Kurdish control over northern Iraq. They created an autonomous zone, and let Barzani run the area. Those people who helped Barzani to become the leader of that zone helped him further after the second invasion of Iraq. This time it was not an autonomous zone but a fully-fledged regional government. Barzani became the president of the regional administration in June 2005.

Apparently that was not all. The gang of neo-conservatives headed by Paul Wolfowitz , then-Deputy Secretary of Defense Richard Perle and then-Assistant Secretary of Defense for International Security Affairs Frank Gaffney promised Barzani, on behalf of the U.S. government a full independent country carved from Iraq and Syria. Gaffney, seemingly during the euphoria of last month’s illegal independence referendum, confessed this in a Twitter post and said that the U.S. government has to help Kurds to realize independence by seceding from Iraq.

Now, after all these trials and tribulations, the Iraqi Kurds deserve better leaders, not adventurists. Leaders who will not listen to longhaired French philosophers and visitors with yarmulkes and map-drawing former colonels, but seek prosperity in societies where they have been essential elements of the polity and society.

Our Kurdish brothers and sisters should ask themselves, why those Americans who did not allow their own people to secede from the Union in 1861 are now urging them to dismember four countries and create one nation. What is in it for them? Do they really want Kurdish dreams to become a reality? Do Kurds have such dreams other than living a better life as founding members of their societies?

Years later a congressional committee could have found that those Americans had no intention of ever following through with Barzani’s childhood ambitions as the Pike Committee did in 1975: The CIA simply wanted to harm Iraq not benefit the Kurds. But by then it will be really too late, and people will tell you that they had told you so.

Friendship and Enmity of USA against Turkey
Fethullah Gulen, a pious Muslim or a radical Islamist?
Comment