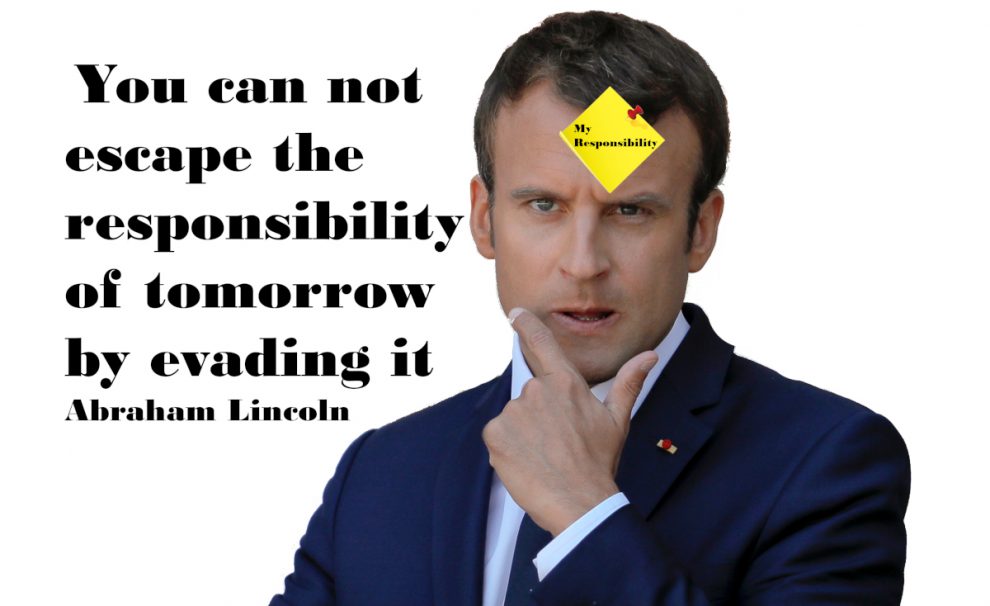 The evaluation of the past should not stop with memory alone, and spectacle bold decisions in a local political tempest.

Then-candidate Macron speaking from Algiers in February 2017, described French Republic atrocities in Algeria as “crimes against humanity,” which sparked outrage from the far-right and the right political leaders, their voters and the colonialist elite. Before him, in December 2012, former President Hollande, during his official visit to Algiers, had declared that his country’s occupation was “unjust and brutal,” but didn’t mention apology, or eventually repentance and turn the page of the French colonial legacy.

In this love-hate relationship between the two nations, storylines still make headlines and boring, tennis exchanges between Algiers and Paris leaders. As far as Algiers arms go, insistence that France must manifest its will and apologize for its crimes committed during its 132 years of harsh colonization, whereas France’s reticence to do so stays lodged in local political imperatives.

Yet last week President Emmanuel Macron admitted that France had a systemic chain that initiated torture during the seven years of a bloody liberation war, which led to the independence of Algeria. Sixty-three-years later and this admission finally marks the French Republic’s acknowledgment that its military, paratroopers and special forces used torture in Algeria.

According to an Algerian war veteran witness who told Arab Daily News — this inhuman and immoral practice was used by the French military authorities even before the Algerian liberation war in 1954-1962.On Thursday, President Macron made the admission in a symbolic visit to the home of Maurice Audin’s widow. Her husband was an Assistant Mathematics Professor at Algiers University, a communist, anti-colonialist and pro-independence activist.

Dr. Audin was twenty-five-years when he was arrested at his home by para-troopers Chief General Massu, a vehement right-wing, vocal colonialist for l’Algérie-française. Dr. Audin was accused of harboring wanted members of the Communist party and the FLN leaders in Algiers. He died after being severely tortured in detention.

These events took place at a crucial time for the International French’s Workers Section (la SFIO), a “diet French socialism” government led by the Council President of the Fourth French Republic, Guy Mollet and his ambitious Justice Minister, François Mitterrand, united in their no-mercy fight to eradicate the Algerian rebellion.

However, for decades French officials had denied that was behind Dr. Audin’s death. His widow was told he had escaped during a transfer between prisons. The far-right and l’Algérie-française nostalgics called him a nation’s traitor, who betrayed his homeland (patria)! In June 2014 former French President François Hollande did admit that Dr. Audin had actually died in the French paratroopers’ detention center.

President Emmanuel Macron’s declaration, which recognizes that this was the result of a policy of repression and torture by the French government, is a sea-change. “I think France can hold its head a little higher following the recognition of this crime. And it opens a new chapter in the ongoing debate about the consequences of the colonization,” the Communist Party Chairman told RFI News.

France’s Ambassador Xavier Driencourt in Algiers told the online paper (TSA), “The President has condemned the use of torture during the Algerian liberation war, it’s a considerable gesture to acknowledge the responsibility of the government of that time.”

In Paris, there is a general sense of mea culpa from the left media and political parties of the Republic, according to Ms. Farida Amrani Ivry, Essone, City Council, a candidate of France insoumise Party in the first district in the 91. She ran against the former-Premier of President Hollande, in 2017 summer legislative elections. She told Arab Daily News; “the Republic has waited so long to admit its dark side of its history, and the time has come to move forward in the two capitals and the Maghreb region relations…”

There will be academic workshops, panels and eventually public debates regarding this event from shore to shore across the Mediterranean. While politicians in Algiers are still trying to score empty political points on this issue, the people “get it” because they know the historiography between the two countries is very real.

Let’s leave the emotional factor aside and face reality. Three-fourths of the population was born after 1962, and don’t know who Professor Maurice Audin was, besides the Algiers University square that bears his name. Because of the selective history curriculum that is taught is dictated by the regime.

Those interested in a first-hand account of the Algerian resistance can get it from the expressive faces of their parents and grandparents or read factual academic works by Professors Mohammed Harbi, Benjamin Stora, Vidal-Naquet and Yves Courrière, writers themselves who lived through the events.

The evaluation of the past should not stop with memory alone, and spectacle bold decisions in a local political tempest, but perhaps the transmission of that memory can be delivered to the young, who are so lost in the hypocrisy of the times. They are the future and they know that both countries must establish a trustworthy relationship, one

based on mutual interests, with economic and academic cooperation, and surely on the issue of national security ramifications.

This is the preamble of the Algerian-French 21st-century history page, and what historians on both sides of the Mediterranean banks would have hoped to see from France in a virtuous circle, and break the vicious circle as President Macron did.

Can Turkey and Pakistan turn historic ties into a strategic partnership?
Compare Israel to Nazi Germany, go to jail
Comment