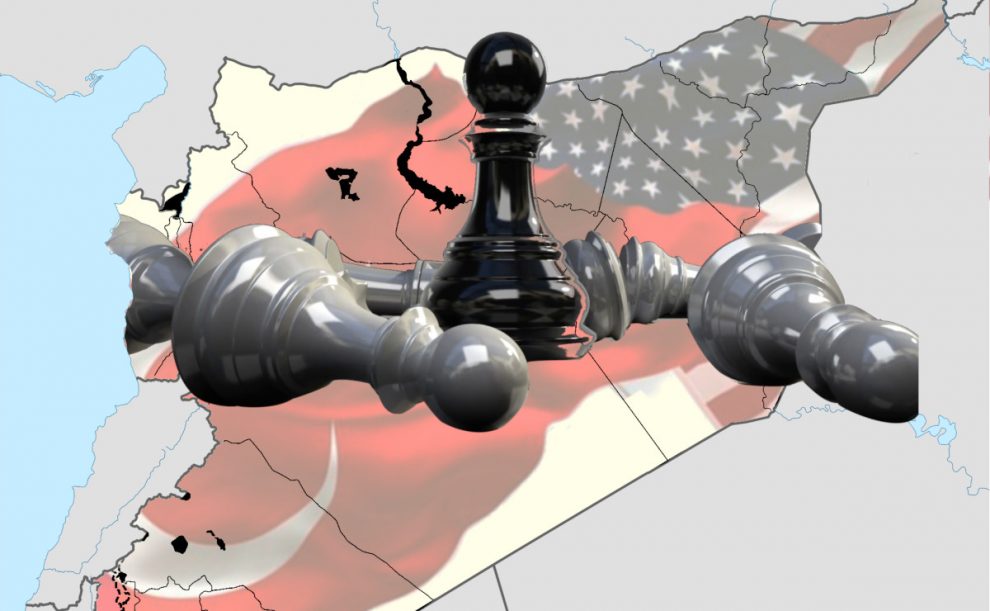 After talking to President Recep Tayyip Erdoğan, Trump agreed on the need for a new strategy and announced a complete U.S. withdrawal from Syria

James Jeffrey, Secretary of State Mike Pompeo’s representative for Syria engagement, told The Washington Post: “Proclaiming to the American public that U.S. soldiers will completely withdraw from Syria ‘very soon,’ President Donald Trump has reportedly agreed to a new strategy under which the more than 2,000 troops currently occupying the war-torn nation will remain indefinitely.”

As he did last week, Trump had announced that he was not going let “our boys die in a war against those fanatic Islamists called ISIS [Daesh] and created by [President Barack] Obama and crooked Hillary [Clinton].”

However, the neocon par excellence Ambassador James Jeffrey was appointed to the State Department as special representative for Syria engagement. Hours after his appointment, Joel Rayburn was sent to Foggy Bottom as the new near eastern affairs deputy assistant secretary and special envoy for Syria.

These two special representatives rushed to Syria and then to Tel Aviv before unpacking their coffee mugs in their new offices at the department. The result came in an unexpected announcement from the State Department:

“The administration is maintaining an indefinite U.S. military presence in Syria, strengthening a policy of bipartisan supporting the fight against ISIS [Daesh], in an attempt to weaken the Iranian and Syrian governments.”

Jeffrey’s own take on this sudden change of policy: “The new policy is we’re no longer pulling out by the end of the year. U.S. forces are to remain in the country to ensure an Iranian departure and the enduring defeat of the Islamic State [Daesh]. I am confident the president is on board with this.”

Of course, Israeli Prime Minister Benjamin Netanyahu was ecstatic too.

Again, the blame was placed on Turkey and its president. As David Bowie would say, the U.S. was trying to “put out the fire with gasoline.” If the purpose was only defeating Daesh terrorists, the local fighters organized, trained and equipped years ago by the coalition under the title of the Free Syrian Army (FSA) could have done the job. They have proved time and again their worth when they fought against Daesh alongside Turkish troops in Turkey’s incursion over the border in Jarabulus, Afrin and elsewhere. The U.S. didn’t have to employ PKK terrorists to fight another group of terrorists. They could not train PKK terrorists into a full-fledged army because the PKK has always engaged in treacherous raids, whether against Turkish people and security forces or against Kurdish people they wanted to bend to their will. Now, we all know it was not the Democratic Union Party (PYD), the People’s Protection Units (YPG) nor the Syrian Democratic Forces (SDF) as Joe Votel, the current commander of U.S. Central Command (CENTCOM), and Jim Mattis, the outgoing secretary of defence and former commander of CENTCOM, who developed the operational plans for the so-called Kurdish state in Iraq and Syria, would like to have president Trump believe. It was 4,000 U.S. Marines who fought against Daesh and only God knows the actual number of casualties. Their last manoeuvre was to provide 12 circles of protection for PKK terrorists.

After talking to President Recep Tayyip Erdogan, Trump changed his mind again and announced that the U.S. troops were coming home and coming home now. An international chorus has begun, singing old and tired slogans. First saying that the U.S. is betraying the Kurds who fought on behalf of it against Daesh.

Actually, no, it isn’t. U.S. soldiers did their own fighting. Second, they said the whole idea was to create the army first and later its statehood. If they cannot do this in the Geneva constitution talks, they would do it by force at the cost of the Turkish alliance. The neocons, the State Department and the Pentagon under their control need a Kurdish state to protect Israel from Iran.

There is a famous saying attributed to both Mark Twain and Karl Marx: History repeats itself, first as tragedy, second as farce. Let’s see if Trump has learned from his history.