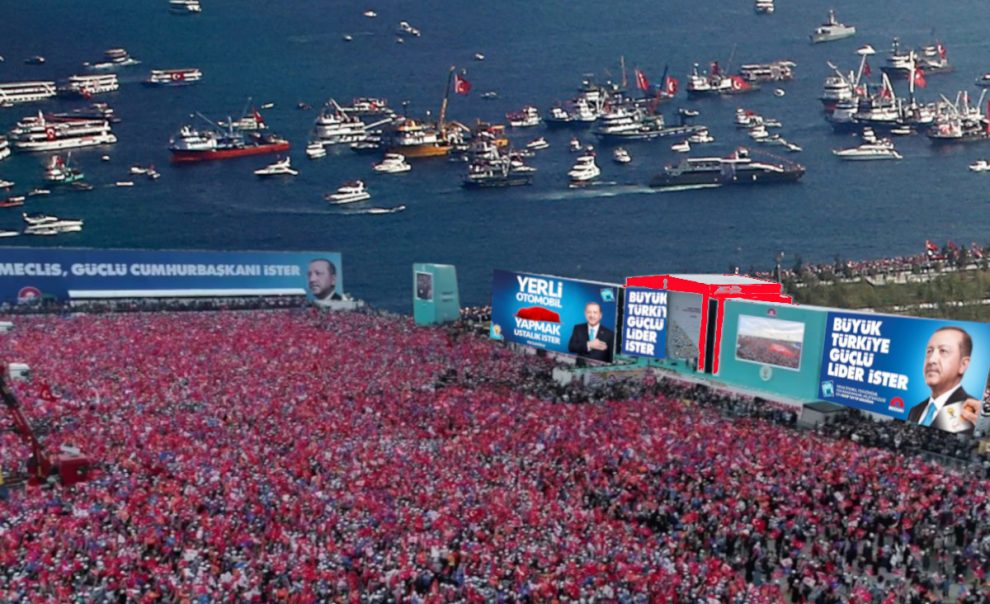 More than 59.4 million voters, according to the Supreme Election Board (YSK), are heading to the polls for the first and exciting election under the new Presidential system after April’s 2017 plebiscite. In a tactical pact between the AK Party and MH Party, President Erdoğan called for early elections initially scheduled in November next year. Presidential and parliamentary elections though are held simultaneously.

Yet these elections are followed attentively by the international media, notably the biased French national media predicting “game over” for the ruling party AKP and its MHP ally — meanwhile commenting that for the first time since 2002, opposition parties have a shot; this means there is a “fair game” going on. Turks’ votes are accounted and counted, and the party well-organized and committed to a long endurance will win, like the FIFA World Cup tournament, and the weak opposition has the right to use the Video Assistance Referee (VAR) and contest the outcome, though it won’t change the final result.

The AK Party and its charismatic leader has not lost an election in the last sixteen years, just one draw against the HD Party in the legislative election in June, 2015, which allowed the HDP to pass the 10% threshold of votes to gain seats and form a partisan group in the parliament. Polls are showing the President’s alliance will have a leading position ahead of the vote. The parliamentary and presidential elections will be watched closely as the President must win by a majority (a comfortable 50+1% of the votes) or a runoff will occur; the parliamentary elections, however, will also be watched as voters and observes track whether the AK Party and his alliance can get enough support to win the majority in the parliament to be able to govern.

There are five presidential candidates who want to dethrone President Erdoğan and defeat his AK Party and his backers the MHP and BBP parties. Currently MP Muharrem Ince for the main opposition secular party CHP, Ms. Meral Akşener former vice-Speaker for the newly-created IYI Party, once seen as Turkey’s “Iron” woman and a serious challenger for President Erdoğan; Mr. Selahattin Demirtaş running for the ethno-regionalist HDP party, also described in 2014 by the French media as the “Obama of Turkey,” despite being in prison on numerous charges; Mr. Temel Karamollaoğlu for a smaller party, the SP or the Felicity Party, an offshoot of the Turkish Islamist movement that had clashed with President Erdoğan because of his governing style and agenda, and Mr. Doğu Perinçek for the VP or Patriot Party, another smaller party that has not reached the 10% threshold of votes to gain seats in the parliament.

The presidential term is five years and under the Constitution, a president is eligible to serve for two terms.

Today’s Presidential election bears witness to a cultural existential fight between two societal projects, a reformist New Turkey on one side, and nostalgic Kemalist Turkey on the other. But it seems Turks are leaning towards New Turkey and cruising forward, giving a new term and political mandate to the sitting President and his party; meanwhile the perplexed opposition and its odd holy alliance set against President Erdoğan’s persona, belief, leadership, political and economic reforms, admits a narrative that drives outside observers to confusion.

The announcement by President Erdoğan for early presidential and legislative elections came as a shock to observers both local and abroad alike. This preemptive Constitutional action seemed like excellent coaching in a turbulent moment of the game that destabilized his opponents propelling them into a panic mood and mind. To the point, the fervent secular opposition courted former President Gül, a moderate nationalo-Islamist as a natural candidate to defeat President Erdoğan.

According to a poll of 5,500 people between May 13 and May 20 by MAK, a Turkish polling agency, the biggest issue for Turkish voters heading into the election appears to be the economy and the state of the Turkish Lira, with 45% of respondents saying that the economy was their top concern. Since 2002, under the AK Party, the Turkish economy has enjoyed what some considered to be a miraculous growth rate.

In 2017 alone, it enjoyed a growth rate of 7.4%. The first quarter of 2018 also experienced a growth rate of 7.4%, mirroring that of 2017. However, there are growing concerns about the state’s economy, particularly in foreign financial sectors. A poll by A&G found that around half the voters think that the government is responsible for the current economic issues, according to the SETA think-tank center’s elections report.

This situation has forced President Erdoğan and his team to act aggressively by raising the interest rate to stabilize the TL and stop the financial hemorrhage — they have qualified the financial hurricane, a financial coup orchestrated by foreign States and their agents in the country, i.e., July, 2016 the failed military coup.

In this stance, however, it is unclear if or to what extent concerns over the economy will affect voter turnout and support for the AK Party’s candidates; this could be read as a it’s the economy stupid James Carville phrase. Furthermore, Turkish politics is complex, it needs depth and sociopolitical understanding from the Western media and politicians because at the end of the day, President Erdoğan is just doing what any elected President in the West would have done institutionally, adding his humanitarian management policy towards migrants in his country, which is enviably seen by those leaders who are puzzled within national security and identity imperatives of the xenophobe parties’ message and the contemptuous media’s story-line.

Sunday’s legislative election outcome is crucial for the President who needs a majority from his party to govern and not be obliged to co-exist with an opponent Parliament that would make him a lame duck President. President Erdoğan hates political ambushes, and Turks have been voting for political stability and economic prosperity for some time, hence if re-elected he would survive all the obstacles for New Republic Turkey’s project trajectory.