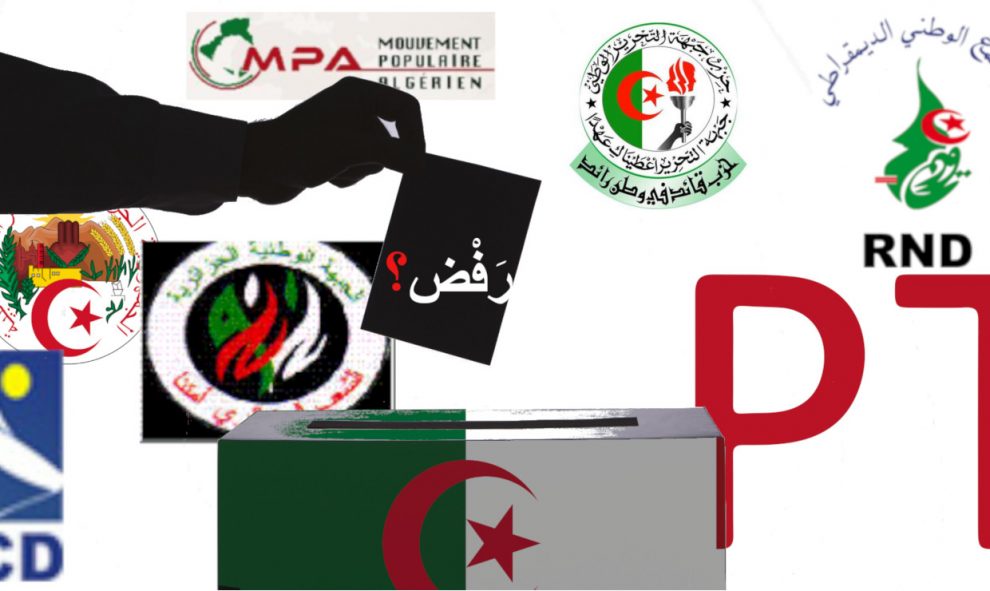 The opium though turns out to be pure honey for the fans’ throats to manifest their anger and challenge the cynicism and the narcissism of their “leaders.”

Four months before the April 2019 Presidential election, where President Bouteflika is running for a fifth-term, despite all the speculation and the talk of the town that he might not run — a typical Algerian spicy winter dish for the local media, the confused elite, and the lost voters to chase. Whereas the regime has yet to sort out the ongoing mystery whether he will or won’t.

A political thriller that echoes the death of Mr Ayache Mahdjoubi in the village of Oum a-Chemel. Trapped for several days in a narrow well, he died when attempts to reach him failed. How he came to be in the well is a mystery in itself and local people offer no sound explanation, only hearsay. Efforts were complicated by the overflow of groundwater around the structure, according to Civil Protection Services. Which pushed protesters to use anti-local government slogans in support of Mr Ayach on Twitter, using a hashtag: “We all are Ayach”, and later they chanted: “The people want the local governor (al-Wali) to fall.”

A number of Algerians criticized the government over the pace with which they reacted to the incident, saying Mr Mahdjoubi could have been rescued if Civil Protection units were deployed on time. “This incident was added to the last summer’s cholera outbreak about the incompetency of the government,” shouted Salim, a local protester.

However, the President’s entourage in Zeralda-sur-Mazafran is intelligently focusing on a strategy to move its pawns into their rivals’ zone, in this case, the generals in Ali Khoja Castle. The President’s entourage has been using tactics to overcome Algeria’s political turmoil of the 90s. Initially, the President put the country back on track, yet the country continues to face many unresolved challenges — failing educational and healthcare reforms, national security threats on the eastern and southern borders, and the government’s misjudgment on migrants policy.

More to the point, a wildly bazaar economy based on hydrocarbons that has long been the backbone of the economy; this base accounts for around 30% of the country’s GDP (gross domestic product) and 60% of budget revenues, but the sector produces few jobs for an expanding population of 41 million where 26.4 % of under-30-years-old are unemployed.

Hence Algeria is on the brink of a severe economic crisis according to the International Crisis Group’s latest report on Algeria.

Algerians believed in the change that was taking place from 1989-91. For instance, the adoption of a modern Constitution, pushing for freedom of expression and press, a multi-party system and importantly ending an era of the monist society and mentality of the FLN party. Algeria felt the breeze of the Algerian glasnost and Perestroïka, thus an Arabs‘ Spring.

Yet these reforms divided the political and the military establishment in the country. The country is still divided today. Twenty-five years ago, pros and cons were arguing not with pens, but with rifles and knives. The situation dates back to 1962, dealing with the dialectic: Whether the country should turn East or West. Decades later, in spite of the Baraka of the oil revenues that occurred during President Bouteflika’s first two terms, politicians still have not figured out how to lift the country up. People live under the poverty line, unemployment is high as the sky; consequently, the dream of the post-89 generation is to swim out on the Mediterranean stream.

President Bouteflika’s four terms in office have had mixed results. His main challenge was first how to subjugate the sacrosanct pact between the military and the so-called “democrats.” He has been using his Machiavellian style to weave alliances with opportunist “democrats”, legalist utopian Islamists, and the old-guard FLNists. This ruse has led to putting all his cronies and trustees in the highest security and administrative positions in the land.

The “velvet” opposition crossing the ideology line is making noises about a scenario of a national dialogue conference to overcome what it calls “the gravity of the situation”, a Presidential entourage feint to assess the President’s deteriorating health. As one hears about the potential extension of his fourth term. In the fog of politics, excitement creates anxiety —  in Algeria, politics is a continuation of the doubt by other means.

“The prospect for a fifth-term seems increasingly dubious as the Algerian President appears weakened by disease and age. All speculations are allowed, including a postponement of the presidential election and an extension de facto of its term,” according to Ms Rachida Azzouzi’s article on Mediapart, Dec, 29.

The fundamental question that many analysts have in mind: Who is going to succeed President Bouteflika? Lately, there have been rumours that he is paving the road for his youngest brother, who is also his special adviser at al-Mouradia Palace or Zeralda-sur-Mazafran. These rumours have been on the surface for a while in a country where rumour is a credible source of news!

Mr Saïd Bouteflika, however, did not hesitate to transgress the President’s clan to remain active and decisive in the ongoing battle in the pre-election season and after — even to the point to pick Algeria’s next President. Or work tirelessly for another term for his brother; which if gained would give a ruling FLN party and its swiss cheese ally parties (RND, TAJ, and MPA) — the so-called Presidential coalition — the generals who are in wait-and-see mode, the business tycoons/profiteers, and the regime’s honey-tongued Imams time to organize a smooth succession. This political charade is likely to be a source of frustration for Algerians worried about unemployment and austerity in a state-controlled economy suffering from low oil prices and reckless management.

Politically, the country went back to the one-party State system and the cult of personality; economically, it is in a state of total anarchy; socially, it is on the edge of an explosion.

In sum, Algerians, notably the youth, are weekly expressing their exasperation from the soccer stadium bleachers, using these bleachers as a political rally podium, in a country where the soft francophone and arabophone elite alike has been criticizing the regime for using soccer as an opium for [his] people — the opium though turns out to be pure honey for the fans’ throats to manifest their anger and challenge the cynicism and the narcissism of their “leaders.”

Because the voters are not trusting any political party nor any leader nor have they a political agenda: Alas, the majority of Algerians is sick and tired of political incorrectness and social injustice.