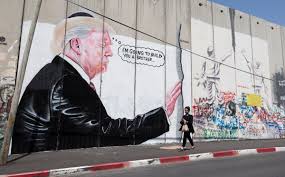 There is only one narrative on Israel and Palestine in conservative and liberal mainstream media in the US. The difference lies in the language used, not the ideas expressed.

The ongoing debate in US media over President Donald Trump’s “recognition” of occupied Jerusalem as Israel’s capital underscores the moral corruption of many so-called liberal voices who oppose the timing, and not the essence, of the illegal declaration.

As if on cue, New York Times columnist Thomas Friedman took the lead by lashing out at Trump for granting “a free giveaway”,  instead of using the declaration as “a tradeoff” that would make it more appealing  for the Palestinians to accept Jerusalem as the capital of Israel.

Articulated in the imperial tone that Friedman has perfected, his suggestion amounts to a call on the US to force Palestinians to accept two illegal Israeli annexations – one of Jerusalem and the second of the big settlement blocs – provided the Zionist state stops expanding colonies outside of these big clusters.

Friedman couches his colonial proposal with meaningless rhetoric against Trump’s one-sided measure, dealing a new insult to the Palestinians who are expected to somehow accept the Israeli occupation with minor adjustments as Israel, and Friedman, see fit.

But Friedman is not alone, it’s a prevalent trend among liberals particularly since the inception of the Arab-Israeli talks in 1991. These so-called liberals support the Israeli occupation by sugar coating their positions with terms like “balanced”, “confidence measures” and “combating terrorism” for the sake of “peace”.

Staunch Zionists like Friedman have resorted to deceptive language to appear soft or moderate, but these “soft Zionists” have no problem with the history of founding Israel through systemic oppression and the ethnic cleansing of Palestinians. They seem to be more concerned about how things appear, rather than the actual criminal nature of Israeli actions.

But such arguments are not confined to Zionists, whether soft or hardcore, but to many liberals who conveniently ignore international law by accepting the official Israeli narrative.

The prevailing discourse in US mainstream media, with exceptions, don’t even refer to the fact that Jerusalem is under military occupation and that Trump’s declaration violates United Nations Security Council resolutions, mainly Resolution 478 that rejects the Israeli annexation of Jerusalem and the Fourth Geneva Convention that bans forced demographic changes of territories under occupation

Palestinians’ rejection of the occupation and their struggle for rights are viewed and portrayed as an irrational emotional reaction that is feared, but not respected.

In the Washington Post’s leading editorial on the issue it unequivocally supported Trump’s claim that for the US to finally accept that the Jewish state has its capital in Jerusalem is “nothing more or less than a recognition of reality.”

The newspaper did clarify that it was talking specifically about West Jerusalem. But it also failed to inform its readers that West Jerusalem was never legally recognized as part of Israel – let alone its status as its capital — which would explain why no major country has moved its embassy to either West or East Jerusalem.

There is an international consensus that Israeli-Palestinian peace negotiations should lead to the establishment of a Palestinian state alongside Israel with East Jerusalem and West Jerusalem as their respective capitals.

Mainstream liberal discourse in the West, but moreso in the US, has no place for respecting Palestinian rights or the struggle. There are no condemnations of the illegality of the Israeli occupation and its suppression and oppression of the Palestinian people – beyond vacuous warnings that Israel could undermine “its democractic nature” by its continued occupation of Palestinian lands.

Freidman has established himself as a guru for spinning the Israeli story. The fact is that he and other pundits in the media are actually informed by a slew of Zionist thinks tanks, soft and right-wing alike, but mainly the Washington Institute of the Near East, whose main members Dennis Ross, Mark Mackovsky and Robert Satloff are said to have influenced the wording of the president speech.

On the eve of the president’s speech Both Ross and Mackovsky  publicly advised Trump that he “should simply recognise that Jerusalem will always be Israel’s capital, even if claims about its exact contours can only be resolved through peace talks.”

Ross was once referred to as “Israel’s attorney” while serving as a US envoy to broker Israeli-Palestinian negotiations. Mackovosky is a former advisor to President Barak Obama. They both thought that their precisely chosen wording would maintain the mirage of the so-called peace process alive, while softening Arab and international reactions.

They were proved wrong but they did however further legitimise the idea that recognising Jerusalem as the capital of Israel is in and of itself not wrong – so long as the president can leave the door open for negotiations and leave the status of East Jerusalem ambiguous.

But Friedman, as the self-proclaimed savior of Israel from its own embarrassing and reckless leaders could not help but give advice on how Israel could maintain and consecrate its Apartheid regime once a Palestinian state is established.

Citing Dennis Ross, Friedman argued that, “when you stop building outside the settlement blocs, you preserve, at a maximum, the possibility of a two-state outcome and, at a minimum, the ability for Israelis to separate from Palestinians. Keep up the building in densely populated Palestinian areas and separation becomes impossible.”

This flagrantly racist comment, is not new to Friedman, and he has no problem legitimising Israeli settlements, as he was the first  to describe the illegal settlements in  the West Bank and East Jerusalem “as a Jewish neighborhood” in an effort to endow a false legitimacy on the colonisation of Palestinian lands – and now he is asking Trump to make it official US policy.

Implicit and explicit racism has been a common trait among many of the narratives penned by liberal columnists in major US newspapers. They will lament the already dead peace process, and then warn against extremists “using the situation to commit terrorist attacks” while totally undermining Palestinian rights and suffering.

The narratives and language are meant to delegitimise Palestinian reactions and resistance as well as dehumanise Palestinians. Whether these liberal voices that serve the American establishment support or oppose Trump’s declaration, they are not much different than Friedman, Ross and Mackovsky in their total disdain for Palestinian rights.

As liberation struggles in Vietnam, Algeria, South Africa and many other nations have taught us: Palestine’s future will not be determined by the ranting of self-serving pundits, and the fight for freedom and justice always prevails.

Algeria The People Speak: What’s Next?
The visa crisis is neither the first nor the last crisis in US-Turkish relations
Comment