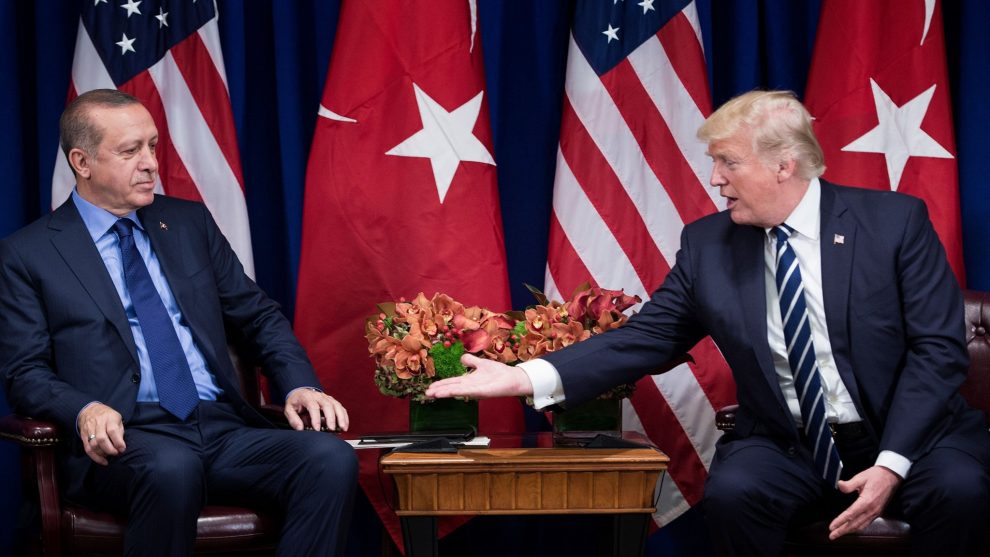 When, in the March of 1947, U.S. President Harry Truman decided to implement a doctrine aimed to “assist and support free people who are resisting attempted subjugation by armed minorities or outside pressures,” he also planted the seeds of Turkey’s transatlantic relations. [1] A few months later, in June 1947, U.S. Secretary of State George C. Marshall proposed a European recovery program, now widely known as the “Marshall Plan,” establishing the roots of the transatlantic alliance. Seventeen European countries, including Turkey, received benefits from this economic recovery plan.

During the 70 years of transatlantic alliance, crises and divergent views have led to tensions on both sides of the Atlantic from time to time, but these temporary crises never became structural, profound in nature. Despite Turkey’s long-standing place in the transatlantic alliance dating back to the 1950s, recent developments (different perceptions, divergent interests and approaches in particular) have raised questions on Turkey’s future in the alliance. In the past, such differences have led to rifts that sometimes weakened transatlantic solidarity. Yet, the solidarity among the members was restored and revived through the opening of new channels.

Many disagreements have arisen between Turkey and the U.S. since the failed coup attempt of July 2016. The U.S. keeps refusing to extradite a Turkish citizen living in self-imposed exile in the U.S., Fetullah Gulen, whose loyalists within the Turkish Armed Forces (TSK) attempted to stage a coup.

Following the arrest of two Turkish employees of the U.S. Consulate on charges of having ties to the PKK and FETO by the Turkish police, the U.S. suspended the issuance of visas for Turkish citizens in Turkey. This was followed by reciprocal Turkish government measures against U.S. citizens. Moreover, 12 U.S. citizens are jailed in Turkish prisons on terrorism charges, amongst them Pastor Andrew Brunson, who is charged with supporting the FETO.

There are also other issues leading to tension between Turkey and the U.S. Turkey’s talks with Russia to purchase S-400 air defense systems is one of them. Although Turkey’s defense minister said that Ankara has no plans to integrate the S-400s into the NATO system, this purchase has led to security concerns and questions about the compatibility of these missiles with the NATO infrastructure. A NATO member since 1952, Turkey experienced a similar tension in 2013 when Ankara decided to purchase a missile defense system from China but dropped the plan in 2015.

Another major disagreement between the U.S. and Turkey relates to the continued U.S. support to Syria’s PKK/PYD. Although the U.S. recognizes the PKK as a terrorist organization, the U.S. considers the PKK/PYD, a Syrian offshoot of the PKK, along with its armed wing the YPG, as its most effective partner in the fight against Daesh in Syria. Turkey has understandable concerns that the PKK/PYD/YPG might try to follow a similar path — to the one taken by the northern Iraqi Kurdish Regional Government (KRG) — towards an autonomous Kurdish region in northern Syria, which might, in turn, embolden the Kurds of Turkey who have similar demands. Turkey argues that the U.S. logistical support to the PKK/PYD is being transferred to the PKK in Turkey. Continuing U.S. supply of heavy weapons to the PKK/PYD even after the defeat of Daesh has the potential to ratchet up tensions between the two countries.

Last but not least, the Zarrab case is a very sensitive issue between Turkey and the U.S. The trial, centered on Reza Zarrab, a prominent Turkish-Iranian gold dealer, is based on charges of banking fraud aimed at evading the U.S. sanctions on Iran by using gold to buy Iranian oil and gas over five years from 2010 to 2015. The former deputy CEO of Halkbank, a Turkish state-owned bank, accused of conspiring with Zarrab, was also arrested in the U.S. Recently, the Zarrab case has turned into a case against Halkbank, with Zarrab pleading guilty and testifying as the prosecution’s witness at the trial of the former Halkbank executive on charges of violating U.S. economic sanctions against Iran.

This case could have significant implications for Turkey and damage the already strained relations between Turkey and the U.S. The Turkish lira has already experienced devaluation in recent months as part of the deterioration in relations. Fines on Halkbank could lead to further devaluation of the Turkish lira. This might worsen the Turkish economy due to its possible impact on the international reputation of the Turkish banking system. Turkey faces the risk of getting cut out of the international banking system and seizure of assets, which is among the scenarios being discussed related to this case. Furthermore, these economic challenges not only have the potential to hit Turkey as a trading state but may also turn into political challenges for the ruling party since a weakened economy could hinder its prospects in 2019 elections.

This case is actually not the first such case. Several European banks in recent years have been hit by penalties for evading U.S. sanctions: Switzerland’s Credit Suisse in 2009, the U.K.’s HSBC in 2012, The Netherlands’ ING in 2012, France’s BNP Paribas in 2014, and Germany’s Deutsche Bank in 2013 and Commerzbank in 2015 were all accused of evading U.S. sanctions, including those on Iran. The French bank agreed to plead guilty and paid $8.9 billion as penalty. For the first time, a global bank agreed to plead guilty to a large-scale systemic violation of U.S. economic sanctions.

This reminds me of the U.S. sanctions put in place under the Iran and Libya Sanctions (ILSA) in 1995. The Clinton administration approved the D’Amato Bill, which, as part of the Iran and Libya Sanctions (ILSA), called for the application of secondary sanctions on foreign companies which had invested or were planning to invest in the oil and natural gas industries of Iran in excess of $40 million during the first year and $20 million during the next four years. Under this law, the U.S. would penalize foreign companies who invested more than $40 million in Iran’s energy sector. The U.S. was hoping that this act would deter foreign companies from investing in Iran. The U.S. government insisted on the implementation of U.S. sanctions by the EU. However, the EU refused to apply these economic sanctions on Iran. Moreover, the EU Commission complained about the U.S. to the World Trade Organization (WTO) due to the U.S. insistence that the EU should follow the U.S. lead in sanctions, calling this insistence illegal under international law and contrary to the freedom of international trade. France became the first country to indicate its opposition to the U.S.’ insistence on the implementation of ILSA by the EU, which was perceived as interference in France’s internal affairs and illegal under international law. The U.K. and Germany followed in France’s footsteps and indicated their unwillingness to implement sanctions and pursued “critical dialogue” with Iran.

The critical dialogue between Iran and EU member states lasted until a German court’s verdict on the Mykonos case (exiled Iranian Kurdish dissidents were assassinated at the Mykonos Restaurant in Berlin on the order of the Iranian government in 1992). The EU member states did not impose economic sanctions on Iran until the Mykonos verdict (1997), which revealed high-level government involvement in this political assassination.

There are arguments that Turkey will take the Zarrab case to the United Nations. This act alone might not yield the expected result for Turkey. Also, anti-American rhetoric will just increase anti-American sentiments in Turkey, which will further erode public support for the Turkish-U.S. relationship and harm both sides’ long-term interests. At the same time, it might damage the already negative perception of Turkey in Washington D.C. This would not help either side in finding remedies to their existing problems and even further complicate and deteriorate the current situation.

What Turkey should do is to act with the EU member states which in the past had similar complaints about U.S. interference in their national sovereignty by imposing sanctions on their banks for evading U.S. economic sanctions on Iran and still have concerns over the Trump administration’s aim to dismantle the Iranian nuclear deal and possibly impose new sanctions. They should find a middle way to resolve this problem within the transatlantic alliance where the notion of solidarity has been gradually eroding away. There is an increasingly stronger need to rebuild trust and solidarity among the transatlantic partners before it is too late.

What comes next after the OIC summit?
The problem of leaders worshiping the power.
Comment