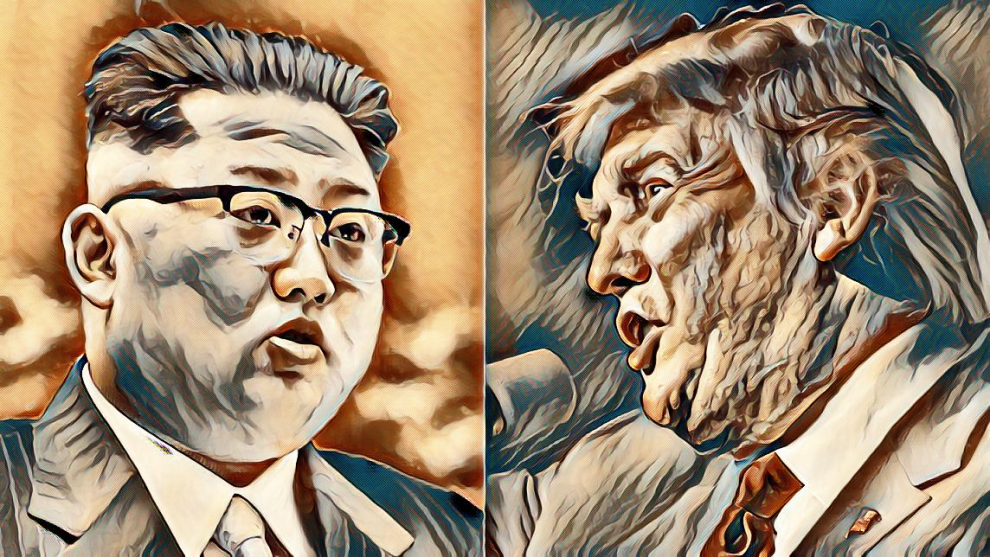 We all watched a happy, chubby Kim Jong Un jumping borders and running toward South Korean President Moon Jae-in, and the two leaders – whom, the whole world thought, were going to war only a week before – were hand-in-hand singing “Kumbaya…” Mr. Trump looked a little disappointed with the turn of events for he was now denied a short cut to save himself from the impeachment sword dangling over his head, but found solace in the evangelical truth that God Almighty would have given him other opportunities.

The world had a collective sigh of relief because Mr. Kim was secretive person about his nukes and seemed ready to wipe out some South Korean cities as a response to Mr. Trump’s war. That could have similar effects that the death of Franz Ferdinand, the archduke of Austria, had on World War I.Since the “Panmunjom Declaration for Peace, Prosperity and Unification of the Korean Peninsula” on April 27, 2018 the world has turned its collective attention to Mr. Trump’s search for other war opportunities. Lo and behold. Mr. Trump’s new national (in)security adviser neocon John Bolton said that the dismantling of Libya’s nuclear weapons program could provide a playbook for North Korean denuclearization. North Korea immediately announced that the planned June 12 meeting President Trump and the North Korean leader, Kim Jong Un could be called off. Apparently, the North Koreans did not have in mind something like a “complete nuclear disarmament, in return for the promise of economic integration” that Mr. Bolton promised 10 years ago for President George W. Bush.

Trump and Bolton must have been jumping up and down when they heard that Mr. Kim, eager to sign a nuclear deal and be accepted into the international community, began having second thoughts about meeting with Trump with this simple suggestion of “Libya Model.”

The Libya Deal could be cited as an example if and only if the fate of Libya and its leader Col. Moammar Gadhafi were not what it was. The South Korean leader openly criticized Bolton’s callousness in citing Libya. Consequently, Trump tried to correct that blather, saying that “the Libya model isn’t the model that we have at all when we’re thinking of North Korea.” He confessed that “In Libya, we decimated that country. That country was decimated.” As we say in Turkey, “Zırva tevil götürmez,” it was no use trying to make sense out of a statement that is, in essence, nonsense.

However South Korean pro-diplomacy politicians knew that it was not a simple diplomatic blunder but Bolton was deliberately throwing a monkey wrench in the peace process. After Trump happily canceled the meeting with Kim we all know it was a deliberate sabotage.

If it were the only sabotage last week by the Trump team. CIA veteran, pro-torture, Tea Party Kansas representative Mike Pompeo made an already bad situation worse, suggesting that the “USA would crush ‘Eye-ran’ unless that country accepts 12 demands” before a new nuclear deal.

Put this way no country could have accepted, even if it was a love letter. Most of the points Pompeo forwarded should have been accepted by Iran a long time ago, even before anybody demanded them. If a country accepts to halt its nuclear weapon development it should open its doors to the International Atomic Energy Agency (IAEA).

No country in the powder keg called the Middle East should play the sectarian politics from Yemen to Iraq, Syria and Lebanon. No country should do anything that could be used as an excuse by Israel to prolong the drama in Syria. The Taliban and al-Qaida are terrorist organizations, and no self-respecting Muslim country should allow its name to be associated with them. Why on earth has Iran issued threats to destroy Israel while it knows that (a) it cannot do it, and (b) it is not good policy saying things that you cannot do?

Iran is not only endangering its people’s future but also dragging the whole region into a fire that the Boltons, Pompeos, Trumps and Netanyahus are very much ready to ignite.

The Arab League: A disaster for both Arabs and Muslims
HDP/PKK Abusing German Alevis For its own Cause
Comment