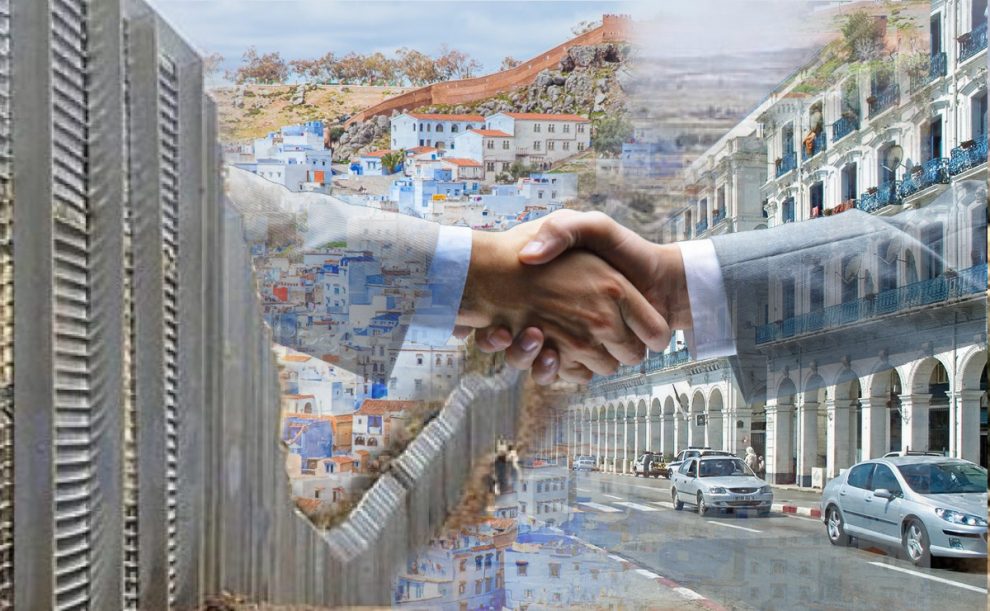 Soccer could federate and be an element to bring people together and enhance their passions, interests and their countries union

Soccer is a social activity within the community, about team spirit and sharing that is contrary to geo-politics or local politics, and by far to nationalism; through the failure of a cohesive international system, the explosion of the world, mentalities clash, and people in each community in this stance are nourished by passions and immediate interest like the French diplomat Hubert Védrine put it in his essay: Le Monde au défi.

Nonetheless, to some point soccer has become a deadly drug with which to hypnotize the people, so goes the political life. In developed countries it is used to determine nationalism and as a solid glue for regimes to eternalize their throne. Thanks to geography and geology, in Fall, 2009, Egypt doesnʼt have borders with Algeria. Otherwise, a war would have broken out between the two countries like it did fifty years ago between El Salvador and Honduras for the same “cause”: a FIFA World Cup qualification.

Or worse, on May 13, 1990, at the Maksimir Stadium in Zagreb, Croatia welcomed Serbia for the first time since the bloody break-up of the former Yugoslavia, the ultras of both teams were already infamous. The “Delije” of the Red Star subsequently became a breeding ground for Serbian para-military units that fought in Croatia (1991-95) and Bosnia (1992-95). The “Bad Blue Boys” of Dinamo unconditionally supported Zagreb’s desire for independence. The tensions were tangible even before the beginning of the match. “That day smelled of trouble,” recalls Renato, a supporter of the Red Star.

The match that declared the ethnic and religious wars of the 1990s in the ex- Yugoslavia.

However, the media in Algeria and Egypt had totally lost their focus on good journalism, which sadly led to panic in the control and news rooms of both countriesʼ media, particularly the Egyptiansʼ Faux News networks style. In light of this dramatic soccer event, the question arises whether the House of al-Aziz then was exploiting this national sports achievement for political gain. The regime was persuading the masses that the national team was Algeriansʼ national common denominator; hence, the regime was seeding the patriotic sentiment among the youth, whose patriotism was identified with a foreign visa from any Western Embassy.

One could hear many young men and women cursing the country. Sometimes confusion between the national heritage and the governmentʼs public policy failures culminate in ignorance. Unlike last week, all Algerians instinctively and emotionally took to the streets and public places, and wrapped them selves in the Algerian flag, les Verts made forty million Algerians proud across the nation and abroad.

Algerians just discovered their patriotism and claimed their freedom. Is this an implicit acknowledgment of the countryʼs politicians skepticism? It is as if the masses lined up behind the national squad and did so for national pride rather than negative nationalism and not really for sports per se. The Generals in Ali Khodja HQ didnʼt expect such a baraka to come. The country is still under high socioeconomic and political tensions, and the hard-line opposition and “independent” press in the Hirak lost their patience toward the Military Chief of Staff and the Caretaker government of Interim President Ben Salah.

Here comes a CAN 19 win championship; and all the regimeʼs sins are washed!
Politicians are capable of turning a circumstantial event into a long-term electorate means strategy and political parameter. Didnʼt France use this argument during the ʼ98 World Cup? When Desailly, Petit, and Zidane won the World

Championship, millions of French fans assembled at lʼArc de Triomphe chanting: “Zidane President,” and the French Tricolor banner became Blanc, Beur and Black. France was reunited and the social assimilation process worked! Four years later, Le Pen got one foot in the Élysée Palace door, and Zidane, who was called to be President of France in ʼ98, eight years later was called for high treason because of his infamous head butt in the World Cup Final in 2006.

Yet Algeriaʼs CAN 19 win created enthusiasm and hope between neighboring countries, notably Morocco, when Algeria won the final match against Senegal, thousands seized the occasion to take the Kingdomʼs major cities, joyfully chanting: “one, two, three viva lʼAlgérie,” asking to open the borders; like Ahmed, an Algerian fan from Oran in Casablanca, screaming on Moroccan M2 TV who called this official political difference shameful, senseless, and inhuman for families who have siblings living in the two countries. As a result, a solidarity sentiment formed between the two neighboring countries whose border closed in 1994 for national security reasons.

After the CAN semi-final victory, Moroccans and Algerians demonstrated their desire marching in border small cities of Saïdia-Marsa in Oujda, Morocco and Maghnia, Algeria. Activists have used the soccer fever of the CAN 19 to draw attention to the economic and social repercussions of the closed border on surrounding dependent populations, some of which were literally split in two 25 years ago.

According to the International Monetary Fund (IMF) lʼUMA countries lose around $16 billion annually to border closure. Tensions between the countries have been inflamed by Algiersʼ support for the Polisario Front since 1975, and by the 1994 bombing in Marrakech involving Algerian Islamic Armed Groups (GIA), which led to the borders closing later that year. However, the roots of the dispute stretch back further to territorial borders designed by the French in the colonial era that led to the war of Sands, a bordeR conflict between Algeria and Morocco in October, 1963. It resulted largely from the Moroccan government’s claim to portions of Algeria’s Tindouf and Béchar provinces.

Activists on social media launched #OpenBorders hashtag, hope their respective governments would put aside decades of dispute that have jeopardized the humanitarian and economic needs of generations on either side of the political difference.

The current Algerian political agenda is about national cohesion, stability and Constitutional responsibility. The Algerian soccer squad looks pretty much like the Hirakʼs face: a mosaic painting that national identity and pride are not in question, represented strongly by those young players some of whom have either a mother or a father of Moroccan descent and vice-versa – the next President with the Generals should look at the option of how to revive the UMA project, and Marrakechʼs treaty spirit and ideals; Algerians like Moroccans, Tunisians, Libyans and Mauritanians will find their national identity when the politicians, the media, and the elite begin to speak vehemently about the concern and the demands of the masses across the Maghreb, denouncing the incompetence and the corruption of the regimes in place.

Soccer canʼt be used as a form of nationalism and communitarianism anymore. In the end of the day, these young fans who went massively to Cairo to cheer for their national team, are like their counterparts in Morocco, Mauritania, Libya, Tunisia and even in the disputed Western Sahara territories who cheered for the Algerian national team in cafés and fan zones are still willing to die in the Mediterranean, not for the flag, but for a better life.

Itʼs a moral burden which weighs heavily beyond national security imperatives; the leaders of the pivotal countries of the Maghreb should end their endless cold war, tear this wall down, and re-launch almost a century-old sub-regional federalism project, the peopleʼs Maghreb or the Big Maghreb. Soccer, no longer just a social activity within a community, could federate and be a positive element to bring people together and enhance their passions, their interests and their countriesʼ union.

The War for Commercial Airliners
What Putin needs to do
Comment