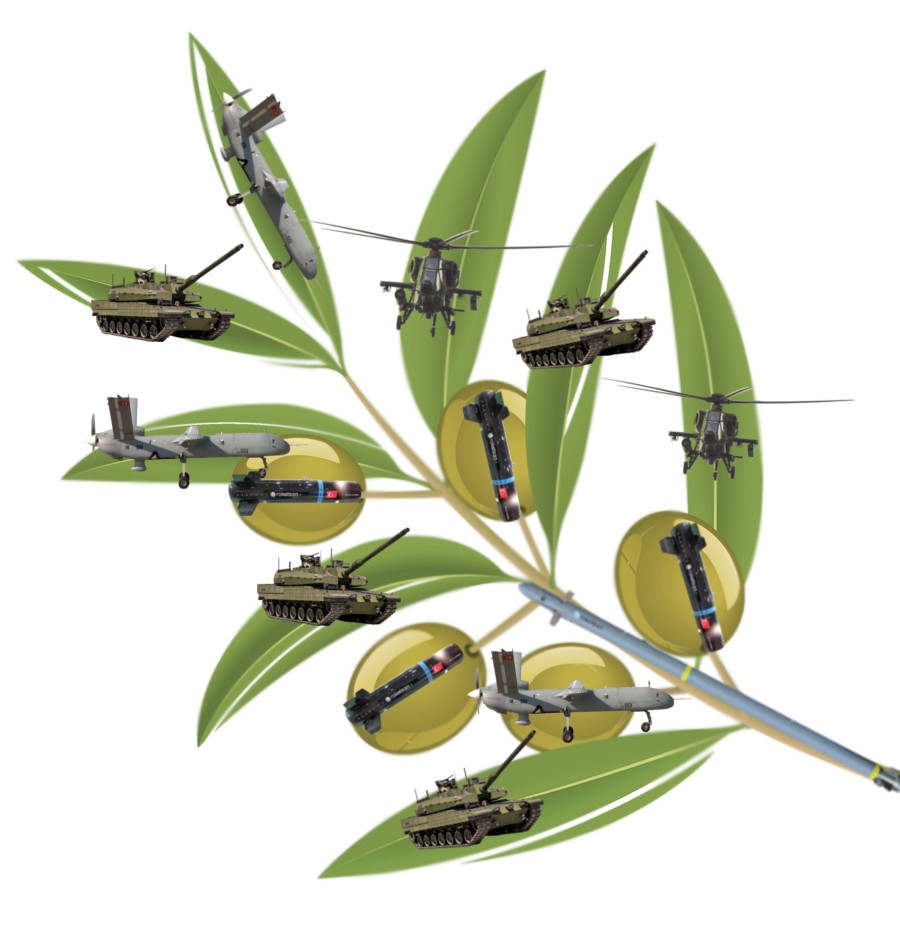 – The writer is a defense analyst at Istanbul-based think-tank the Centre for Economics and Foreign Policy.

Looking into Operation Olive Branch, and previously Operation Euphrates Shield, one could see the trajectory of Turkey’s military roadmap in the 21st century in terms of defense modernization and doctrinal order of battle.

The first and foremost development revealed by the Olive Branch was the drastic improvement in the combined arms operations capabilities of the Turkish Armed Forces.

Furthermore, the joint characteristics of the campaign, namely the synchronization between different branches (most notably between the Air Force, the Army, and the counter-terrorism units of the Interior Ministry) marked crucial achievements.

In addition, the Turkish Air Force’s high operational tempo was an important factor in the success of the campaign.

Apart from the ‘usual’ positive factors, the Olive Branch might have hinted at something really big.

Ankara seems to be taking the first steps of building a robotic warfare vision. If the Turkish decision-makers could indeed succeed in promoting the robotic warfare agenda, this would elevate the nation to a whole new level not only militarily, but also geopolitically.

Below, this assessment presents a scorecard of the Afrin campaign with respect to the lessons learned.

The following points would be key to developing a thorough understanding of what the Turkish military’s operational art could look like in the coming decades.

As the Turkish defense industry boosts its unmanned aerial vehicles production capacity, both in quality and quantity, this very uptrend translates into more robust ISTAR (intelligence-surveillance-target acquisition-reconnaissance) advantages for the tactical and operational–level commanders in the area of operations.

Coupled with the enhanced precision solutions in the artillery and MLRS segments, the Turkish military is now able to make pinpoint interventions in a broader battleground.

In this respect, Turkish forces’ successful targeting of armed convoys (both the YPG and the pro-regime militia groups) heading to Afrin remains good cases showing the level of integration between unmanned systems and land-based fire support units even against time-sensitive, mobile targets.

In theory and doctrine, train and equip concepts, including the Foreign Internal Defense function of Special Forces, are generally designed to compensate for the absence of large-scale conventional deployments.

In other words, train & equip programs, especially during the Syrian War, go hand in hand with ‘no boots on the ground’ principles.

However, Ankara opted for using its own train & equip programs for the Free Syrian Army and the Turkmen groups for manning the indigenous component of its cross-border counter-terrorism campaigns alongside with multi-brigade-level deployments from the Turkish Armed Forces.

Furthermore, when compared to Operation Euphrates Shield, Operation Olive Branch enjoyed better-trained and better-disciplined local forces, which were an important factor for the success of the campaigns.

The recent decade witnessed a notable uptrend in the proportion of indigenously-manufactured weaponry in the Turkish Armed Forces’ inventory, along with Turkey’s rising arms exports.

Even more importantly, the Undersecretariat for Defense Industries, Turkey’s main procurement body, showed a good performance with the active protection systems acquisition for armored platforms in the course of the campaign.

In the face of the anti-tank guided missiles (ATGM), which dominate hybrid battlegrounds of the Middle East, armor survivability comes into the picture as a problematic burden on conventional forces.

In fact, lessons learned from the Euphrates Shield revealed this bitter reality painfully.

The YPG / PKK, along with many other terrorist groups, have gained menacing ATGM capabilities during the Syrian conflict.

Starting from the outset of Operation Olive Branch, many ATGM attacks were perpetrated targeting the Turkish armored platforms.

In response, the Undersecretariat for Defense Industries has speeded up its efforts during the operation, and prioritized the active protection systems acquisition.

In cooperation with Ukraine, Turkey’s first active protection system Pulat (later named Akkor Pulat, based on the Ukrainian Zaslon-L system) was tested and readied when the campaign was still ongoing.

The abovementioned incident alone showed the true meaning of having a successful military-industrial complex with rapid response to the needs of the warfighting forces on the ground.

All in all, Turkey now enjoys many combat-tested national systems in its inventory.

Next up remains improving the proportion of indigenously manufactured components — especially the critical ones — in these weaponry, while beefing up key investments in more strategic segments.

The Turkish military has been employing unmanned systems intensively in the Afrin campaign.

As mentioned earlier, technological and numerical improvements in unmanned aerial vehicles (UAV) provided the ground units with better tactical awareness in their operations.

Even more importantly, in the course of the Afrin campaign, the Turkish President Recep Tayyip Erdogan hinted at the prospects of producing ‘unmanned tanks’, which suggested Ankara’s defense modernization perspective regarding robotic warfare.

Notably, in late February, the Undersecretariat for Defense Industries tweeted that the tests for the unmanned variant of Ejder Yalcin armored combat vehicle was successfully initiated.

In sum, the Turkish defense industry has developed a snowballing interest in unmanned systems.

Probably, this strategic direction would translate into further leaps in robotic warfare.

In fact, if Ankara manages to seize the opportunity to catch up on this breakthrough of future warfare, which is expected to usher in a new era, then Turkey would drastically boost its military capabilities, and produce geopolitical results in its hinterland.

And, the shortcomings: Although Operation Olive Branch marked an important success, still, Turkey has a long way to go in several aspects.

Firstly, hybrid warfare is not only about enhancing the armor survivability in the face of asymmetric threats equipped with ATGMs, but also conducting state-of-the-art information operations.

In this regard, there is more to be done.

For example, thanks to the advanced UAV capabilities, the Turkish military captured high-quality footage of the PYD/YPG terrorists obstructing civilians from leaving the city, and forcibly keeping them in the danger zone.

Besides, the same drone capabilities also rendered abortive the YPG / PYD’s disinformation attempts, such as the slander about the Afrin Hospital.

These captures, by all means, give Turkey a crucial moral ground when confronting a sneaky adversary, along with ‘high-impact munitions for information warfare’.

Yet, these footages were only tweeted — firstly in Turkish, and somehow then in English.

Instead, a comprehensive campaign both in social media and key venues of global strategic community (i.e. top Western think-tanks) could have been realized.

After all, in hybrid warfare situations, diplomacy is not limited to the bureaucratic activities of foreign offices and diplomatic missions.

Secondly, although both the Turkish political elite showed a sound performance in setting the diplomatic conditions for the campaign, and the military executed the operations impressively in a very dangerous hybrid battleground, the Turkish press and strategic community mostly fell short of following suit.

There were only a handful of publications and broadcasts addressing foreign audiences to augment Turkey’s representation.

However, the psychological dimension is as crucial as the kinetic effects in hybrid conflict.

All in all, Turkish strategic community has to understand that every military campaign has a ‘public relations’ aspect that deals with the whole world at a time.

Last but not least, in the face of the terrorist rocket campaigns, both by Daesh during the Euphrates Shield and the YPG / PKK during the Olive Branch, Turkey’s imminent need for effective C-RAM (counter – rocket, artillery, and mortar) threats was once more revealed.

Nevertheless, Afrin is mostly cleared from the terrorist threat, and now, there is a new future and new hopes for its people.

The Turkish leadership gave a strong message to the world underlining its strong will and determination to keep its doorstep safe, if necessary, by military means.

The Turkish Armed Forces once again proved its advanced capabilities.

The Turkish diplomacy secured a beneficial rapprochement with the Russian Federation.

And the Turkish public opinion showed that it would support the government in its endeavors to promote national security.