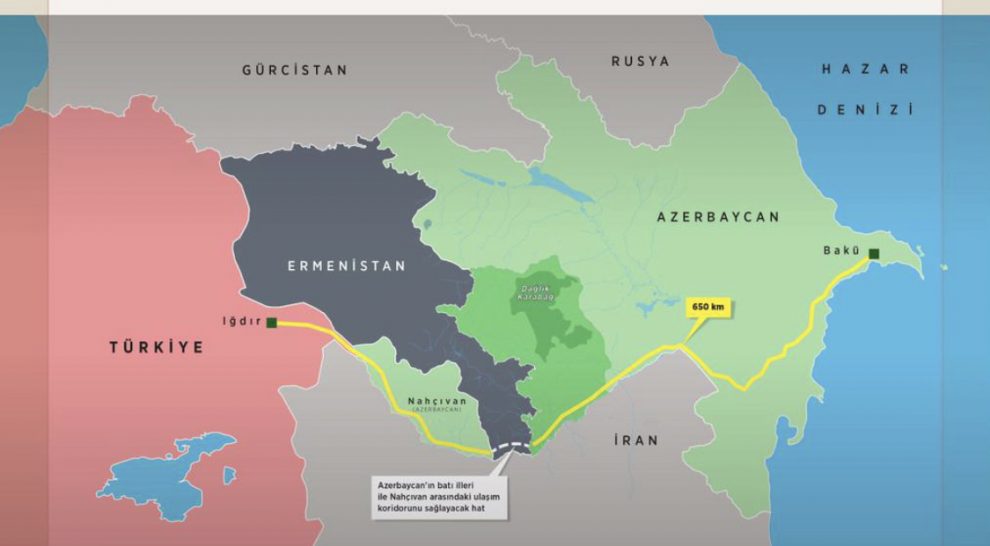 As Germany has been subjected to the US sanctions for its Nord Stream 2 gas pipeline, so-called Nakhchivan corridor mentioned in the armistice that ended the Karabakh war between Azerbaijan and occupying Armenia could connect Europe to Turkmenistan gas supplies thus reducing Russian influence over Europe which Washington has been trying to accomplish.

“Ankara is ready to help carry Turkmen gas to Europe via Turkey,” Turkish Foreign Minister Mevlut Cavusoglu said on February 23rd during a joint press conference after meeting his Turkmen counterpart Rasit Meredov in Ankara. European access to rich Turkmen gas reserves would be vital for supply diversification hence reducing dependence on Russia. Trans-Caspian pipeline project (TCP) aimed to pump Turkmen natural gas to Europe via Azerbaijan, Georgia and Turkey circumventing both Russia and Iran. However, the project has never been realized due to failure in political and economical support. TCP could now be revived since Nakhchivan corridor offers 340 km shorter itinerary making the project profitable.

Russia has been the main energy supplier for Europe meeting around 30 percent of oil and 40 percent of gas needs of the continent. Moscow has been notorious for using the energy card to expand its ever-growing influence especially in NATO alliance countries. It was recently reported that Moscow successfully manipulated Berlin into promoting its rhetoric towards  Washington about Nord Stream 2 pipeline project. The US has placed sanctions on companies involved in Nord Stream 2 in January during former president Donald Trump’s final days in office bringing the construction to an halt. But Europe has been in need of gas supply more than ever as it aims to cut carbon gas emissions and switch to more environmental friendly natural gas.

Gas supply for Europe without any political strings attached to it could come from across the Caspian sea,Turkmenistan. Azerbaijan has captured parts of its Armenian-occupied territories in Karabakh during a short war with the help of successful Turkish drones. The triumph created a corridor which enables uninterrupted link between Turkey and Azerbaijan, according to the agreement signed in November last year. A small territorial gain offers a big opportunity for European energy security which would effectively reduce dependence on Russia.

Turkmenistan has one of the richest gas reserves in the world and according to Turkish Foreign Minister, Turkmen gas could reach European market through Turkey. Several European countries have objected Turkey’s assistance to Azerbaijan during the war with Armenia late last year but Baku’s victory could help eliminating Moscow’s energy card against Europe and serve the interests and energy security of the continent.