Netanyahu’s Finest Hour” was the headline of a recent Jerusalem Post op-ed by columnist Caroline Glick, who had earlier suggested that the Israeli military should have disabled the Mavi Marmara, and Gaza buses that carried protestors to the border area. She also suggested that the Israeli military should dump human feces on the Gaza side of the border to prevent further demonstrations.

If we go back to her “finest moment” theory, Glick concludes that Netanyahu is indeed “the greatest statesman in Israel’s history,” because he developed his own strategy of dealing with the regional countries rather than relying on American initiatives. His predecessors saw the region from the perspectives of American and European interests. But Netanyahu has built his regional strategy on the real Middle East.

She writes: “During the Obama years, Netanyahu realized that Obama’s policies toward Iran and the Muslim Brotherhood imperiled Sunni Arab states no less, and perhaps even more than they imperiled Israel. Netanyahu developed relations with Egypt, Saudi Arabia and the UAE [United Arab Emirates] on the basis of these shared concerns and shared interests in diminishing the deleterious consequences of Obama’s policies.”

In fact, what she says is that Netanyahu simply used the sectarian animosities between some Arab countries and Iran to bring about a situation where the Saudis, Egyptians, and the UAE have “sided with Israel against Hamas, Qatar and Turkey” since 2014.

Glick thinks that that united front prevented Obama from coercing Israel into accepting Hamas’s cease-fire terms then and now Trump and Arab front are taking side with Israel against the “anti-terror measures Israel is taking.”

She calls this Netanyahu’s finest moment, celebrated by President Trump’s daughter and son-in-law.

Just three years ago, another Israeli author, Gideon Levy, labeled this policy as the “emergence of a neo-Nazi Israel.”

Levy accused the Jews in Israel and in the U.S. of becoming insensitive to the plight of the Palestinians. The Israeli lobby in the U.S., he said, is like a relative of a drug addict who supplies money to feed his addiction. He said the U.S. Jews should not help the “occupation-addicted Israel” that continue to demonize the Palestinians.

The top-selling Hebrew newspaper Haaretz also reported that this week Israelis felt invincible, but the reality is that dark clouds continue to gather. There is no friend of Israel in the world other than those somehow scared of Trump’s (and the Pentagon’s) strong-arm tactics. 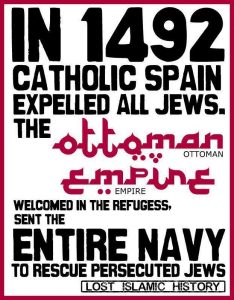 Israeli Jews should listen to the friend in their darkest days, the Turks. When the whole of Europe shunned them, the historical Sephardic Exodus to the Ottoman Empire took place, saving hundreds of thousands of women, men and children from the Spanish gallows. Again during the Holocaust, thousands of Jews found their way to the safety of Istanbul. Muslims in general and Turks in particular never had any ill will towards Jews because of their religion or ethnic identity. The hatred and rage today is only there because of Israel’s denial of the Palestinian nation.

They started – nay, invented – the ethnic cleansing to drive the Palestinians from their homelands in the British Mandate of Palestine. They occupied Syrian, Egyptian and Jordanian lands so that Palestinians could no longer live anywhere near Israel. They made all Muslims hate their state when they tried to annex Jerusalem for Israel. When their decision is supported only by the U.S. president, not the U.S. Senate or House, they should know what their false friends in the Israeli lobby are doing: They are feeding Israel’s occupation-addiction.

It cannot continue like that. Israel cannot keep this position of power, taken illegally and with the help of the U.S., They cannot divide (and rule) the Arabs.

It is about time, the Iranians and Arabs will see that the sectarian divide helping none but their enemies.