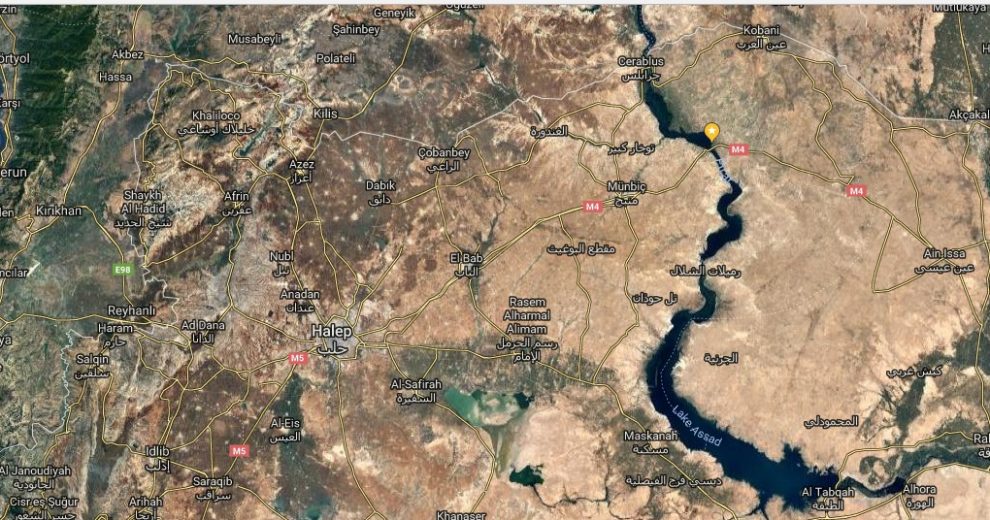 The region of Manbij, to the east of the Euphrates Shield region, has been a source of friction between Turkey and the United States. The YPG/PYD, the Syrian branch of the PKK terrorist organization, has been in the region as a U.S. strategic ally for approximately four years now. Several media reports have revealed that this organization has been equipped by the U.S. with some two thousand truck loads of ammunition and latest weaponry. As a result, tensions have been brewing between Ankara and Washington regarding the YPG and its occupation of the towns of Afrin, Manbij, Tal Abyad, Ayn Al-Arab and Qamishli. The latest developments, however, show that an agreement seems to have been reached between Ankara and Washington.

On Monday, June 18, 2018, the Turkish Armed Forces (TAF), in coordination with the U.S. Forces, initiated an operation from the region of Dadaat to the north of Manbij, bordering the Aleppo region and the operational grounds.

The region is approximately 31 kilometers (19.25 miles) from the Turkish town of Gaziantep. Bordered by the Marma al-Hajar and Sharat al-Hajar mountains, Manbij is considered as more ‘flat and open’ compared to the Afrin region, making the conduct of a ground offensive easier. It is also home to a large infrastructure needed for wheat production, to cement factories and various other industries.

How important is Manbij for Turkey?

Manbij has a population of about 700 thousand people, 400 thousand of whom live in the city. The ethnic makeup of the city is Turkomans (10 percent), Arabs (85 percent), Kurds (4 percent) and Chechens (1 percent). Tribalism is still quite strong within the city, which consists of about fourteen different tribes that can be divided into four main categories: 1) Pro-Assad 2) Pro-PKK 3) Pro Assad-PKK and 4) Opposed to both the PKK and the Assad regime. The Al-Bubanna tribe, which is pro-PKK and pro-Assad, is known to be the biggest tribe of the region. Following Al-Bubanna is the Albu Subayya, Bani Said and Damalkha tribes.

In comparison to the Afrin region, the Manbij area is not suitable for urban warfare. No trenches or other kinds of fortifications have been seen so far. The region is flat with no mountains nearby, which makes military penetration quite straightforward. In any instance of conflict, counterattacks by the TAF will be easier and quicker, as ambushes from the rear and flanks would be very difficult given the region’s geographical structure.

Local sources state that there are approximately 50,000 PKK terrorists in Manbij and the east of the Euphrates. The locals in Manbij have no ideological affinity with the terrorist organization and are thus not happy with their presence. In the eyes of the local population, “a small ideologically driven group” is trying to control the majority in the city, which has precipitated a set of negative reactions. The presence of the PKK/YPG in the region is quite unwelcome and is seen as factitious.

Manbij is currently governed by the local Manbij Council, with the PKK constituting its majority. The organization is headed by Farouk Maashi and Ibrahim Qaftan, with Haval Ismail also present as co-president. The Syrian Democratic Forces (SDF), a proxy of the PKK in the region, consists of 500 Kurds from the PKK, and 4,500 Arabs. The organization is run by Cemil Mazlum from the YPG. The military wing of the SDF is divided into two: Jund Al-Haramain, which is made up of Arabs, and the Kataib Sham al-Shimal, made up of Kurds.

Joint patrols by Turkey and the U.S, initiated on June 18, will most likely be backed domestically by the FSA units in the Euphrates Shield region. It is estimated that the patrols are aimed at driving the YPG terrorists out of the region, creating a safe haven for internally displaced people and secure the lives of Manbij locals.

As for the rebel groups currently present in Manbij; they are divided in two: ‘Hayat siyasiyyah’ (the political committee) and ‘Hayat Askariyya’ (the military committee). The political committee is presently run by Hasan Nafi, while the military committee is divided into three units, which are the 1st Battalion commanded by Zekeriyya Karsli, the North Battalion commanded by Faruk Shaikh Wais, and the third subgroup consisting of minor rebel groups.

The Manbij operation is of significance for the region for two primary reasons: Turkey’s national security and humanitarian factors; i.e. providing much-needed relief aid for the locals. The PKK is known to bring in recruits from Syria for its terrorist activities in the southeast of Turkey. Ammunition and weapons found and seized by the Turkish security forces in the region are mostly of American origin, those distributed by the U.S. to the YPG. Fresh overseas recruits are providing a lifeline to the PKK and thus help ensure that the organization’s terrorist activities continue. This constitutes a great national security concern for Turkey. In addition, reports have also indicated a looming humanitarian catastrophe for the population in Manbij. Moreover, the YPG has been extorting heavy taxes from the locals and forcibly demanding allegiance to the organization. On Jan. 13, 2018, the YPG arrested Abd Al-Hanan al-Mohammad and Aboud Hussain, killed and decapitated them, and dragged their bodies around in Manbij. This cruel act resulted in hundreds marching in the streets of Manbij to protest the YPG.

All in all, the joint patrols initiated by Ankara and Washington have great significance for Turkey’s national security and the people of Manbij. This joint activity will most likely result in the PKK’s terror corridor being narrowed down while confining the PKK to the east of the Euphrates. Forthcoming operations by the TAF may also target the PKK presence in Qamishli, Ayn Al-Arab, and Tal Abyad.

Turkey’s presidential and parliamentary elections: many winners, few losers
What happens if both Netanyahu and Pompeo support you?
Comment