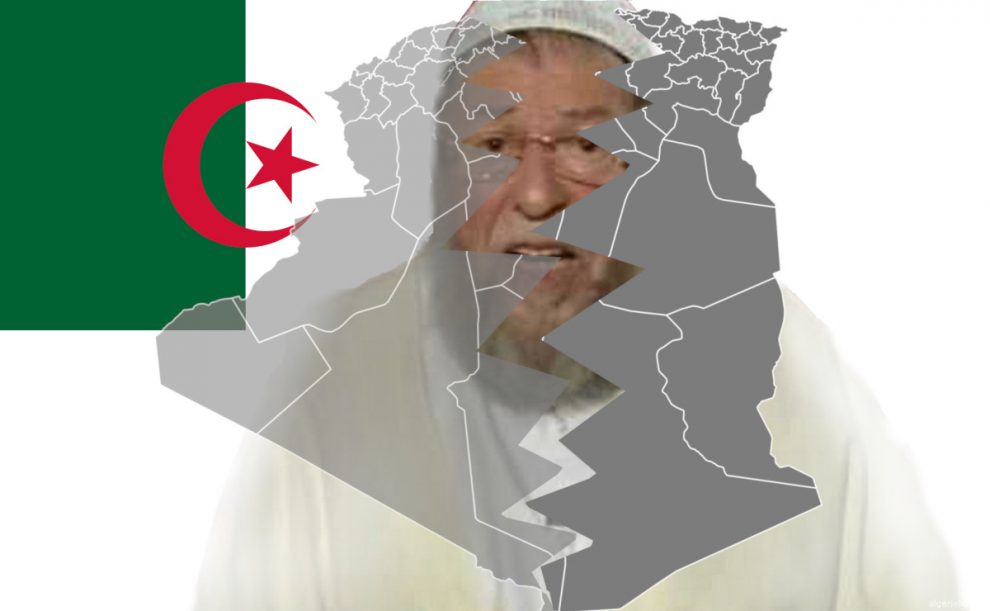 In choosing exile in Qatar, he left behind a divided Islamist leadership in a deep political identity crisis.

Wednesday marked the passing of Professor Abbassi Madani, longtime militant Islamist leader and the last Algerian Islamist Movement voice of the liberation war and post-Independence generation, Dr. Abbassi, affectionately called a-Sheïkh by ex-FIS activists and sympathizers, died Wednesday at the age of 88 in Doha, Qatar, where he had decided to remain in exile after surviving twelve years in prison in Algeria in the wake of the January, ’92 Generals’ coup against then-President Chadli Bendjedid, making an end to the democratic process and the banning of the Salvation Islamic Front party (FIS).

The son of a pious and religious family, he was born February 28, 1931 at Deyar Ben Aïssa, Sidi Okba, Biskra Province. As a young nationalist activist, he adhered in his early years to the Algerian Peoples’ Party (PPA), under the leadership of the charismatic Messali Hadj. In his youth he joined the FLN, where he took part in a commando raid in Algiers in the first days of the Algerian liberation war in 1954, planting a bomb at Algiers Radio location; he was immediately arrested by the French authorities and jailed where he remained until independence in 1962.

Professor Abbassi became a charismatic leader of strong opinion regarding the Algerian Islamist Movement in the academic milieu, approaching young students who were already intellectually impacted by the teachings and the writings of the Algerian Islamist Movement Maître à pensée, Dr. Malek Bennabi — Professor Abbassi and his followers created the al-Benaa al-Hadhari Association, an Islamist view to counter the Marxists on the universities’ campuses and to contain the ruling FLN party’s socialist orientations. 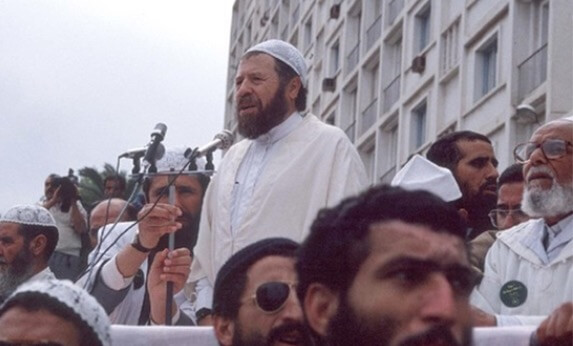 Dr. Abbassi Madani FIS Party President in Algiers Political Rally. Photo courtesy of Abdennour Toumi
Thus the creation of the al-Benaa al-Hadhari Association led later to the foundation of the al-Jazaara (Algerianists), an elite Islamist political view like their mentor Dr. Bennabi, focused on finding a way of reconciliation between Algerian nationalism and local Islamism, interestingly like what President Erdoğan in Turkey had done by introducing and initiating in the AKParti’s ideology and platform.

The Algerianists’ conviction paid a heavy price in the aftermath of the creation of the ex-FIS party, clashing with the party’s ideologues and the radical wing. This was one of reasons that pushed the regime’s fearful domestic Intelligence Service to demonize and demolish the party and its leaders. His criticism of the politics and the country’s cultural dimension under the regimes of Presidents Boumediènne and Chadli cost him repeated arrests, harassments and years in the regime’s prisons of al-Berouaguia and Blida, as well as suffering under torture, according to credible sources from his entourage told to ADN.

Having vehemently opposed the Algerian regime for decades, the  regime decided in 1989 to open up and establish a new Constitution that would allow freedom of speech and press, and a multiparty system, so the Islamists like other opposition parties left clandestine activities and entered legal status by organizing themselves and creating political parties. In a general surprise to the heterogeneous Islamist establishment  Professor Abbassi together with Sheïkh Ali Belhadj created the Islamic Salvation Front Party in February, 1989 at the a-Sunna Mosque in the popular Algiers neighborhood of Beb-al-Oued.

In choosing exile in Qatar, he left behind a divided Islamist leadership in a deep political identity crisis, his ex-party’s militants found themselves between exiled elite in Western countries and an opportunist and dystopian base converted into bazaar business. The latter took the regime’s Intelligence Service’s deal and came back to the house of obedience, while the Algerian Brothers ate until stuffed from the regime’s hand like TAJ. As a result, these days the entire Islamist nebulous web is suffering a severe political suffocation.

His militants are timidly acting in big cities’ neighborhood mosques, for instance in Algiers and its agglomeration, with the charismatic ex-party leader Ali Belhadj’s briefings on the state of the nation after al-Echaa prayer. Nonetheless, Professor Abbassi Madani’s ideas have been all over the February 22nd Mosaic Uprising, despite the discretion of the Islamists wearing the white jellabas (long Islamic white dress) in the ongoing anti-regime protests. 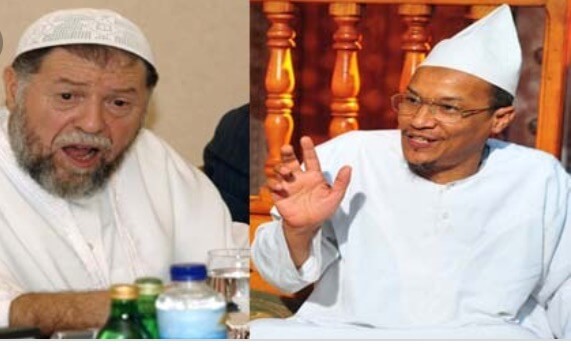 Dr. Abbassi was a controversial figure, Algerians were divided between bashers, haters and sympathizers because of the bloody years of the Algerian sociopolitical tragedy in the ‘90s between armed Islamic groups and the regular armed forces. His detractors blame him as the source of that tragedy; however years later, many field witnesses from the regime said all that was orchestrated by the regime.

He had the respect of his peers nationally, from Dr. Hocine Aït Ahmed, a historical leader of the liberal party FFS and a national hero in the liberation war who had courageously denounced the January, ’92 military coup, rejected a Presidential post from the putschists, then called for the continuation of the electoral process and respect for the people’s choice, a position that brought him accusations of being “pro-Islamist!”

An anonymous source in London told ADN at that time there were talks between the FFS and the FIS leadership offering him the post of Speaker in the first elected multi-party Algerian Parliament. Da al-Hocine, like Dr. Mehri, then the FLN Party Chairman,

like the former-President Ahmed Ben Bella, the leader of the MDA party, and Ms. Louisa Hanoun, the leader of the PT a Trotskyist party, in 1995 signed the Saint Egidio Agreement in Rome, Italy with Algerian parties including the FIS representatives. While at that time Dr. Abbassi Madani was in jail with his lieutenant Sheïkh Ali Belhadj in Blida prison asking the regime to open negotiations to end the bloody war against the civilians that had cost more than 200,000 lives and pressed thousands into exile.
Change in Algeria doesn’t necessarily rhyme with liberal democracy and liberty.  Consequently, in 1990, Dr. Abbassi Madani led a legal political movement that could have changed his political destiny and the course of Algerian politics and system. His party, the FIS, as a nationalist-Islamist-oriented party proposed to promote Algerian socioeconomic life and the country’s macro-and-micro-economic determinants, standing for political legality. Despite amateurish political strategy, mistakes based on weak semantic arguments were hard to control by the ex-FIS leader from the party hard line who hijacked the party’s program and platform after the landslide victory in June, 1990 Municipal and Provincial elections.

The Secularist Francophone and Arabophone elite alike preferred to be ruled by a military regime rather than an Islamist party to dispel their paranoia under an Islamic Republic ruled like Iran. Even though Iran under the Mullahs’ regime has become a pivotal regional power, and its nationalism and sectarian hegemony has reached the eastern Mediterranean shores and harbors. Ironically, Professor Abbassi was asked once by a local journalist on his party’s relation with Iran to which he replied quietly, “… sugar and salt have the same color, but they taste differently.”

The Generals in Ali Khodja and the biased democrats, the corporate feminists, the central Union workers and the carpetbagger nationalists of the FLN have accused him of being a religious zealot, an opportunist and even foreign agent, but his dedication to his country as a Moujahid (freedom fighter)  and to the cause of Islamic democracy like the Christian democracy in the Europe and his philosophical conceptualization for human rights and civil State according to western definition did not make him look like a State man. Yet he was never understood because of the media machine fueling the regime’s character assassination campaign.

Tomorrow’s Dr. Abbassi Madani’s funeral will be a barometric gauge for the ongoing Hirak and the Islamists’ role in the power struggle equation within the conventional fragmented opposition and the romanticist protesters on one hand and the regime on the other.

The Algerian regime has never felt threatened by any political parties, but the ex-FIS leader and his party did shake the regime’s ego and existence, so Algerians today are split on how to mourn him, as a moderate Islamist who believed in democracy, or a leader who could have become the first Islamist democratically elected president in the Arab countries; who knew the politics of his country is exactly like a Moroccan sweet and salty “tajin” that could melt easily in the dish, but very hard in the mouth.