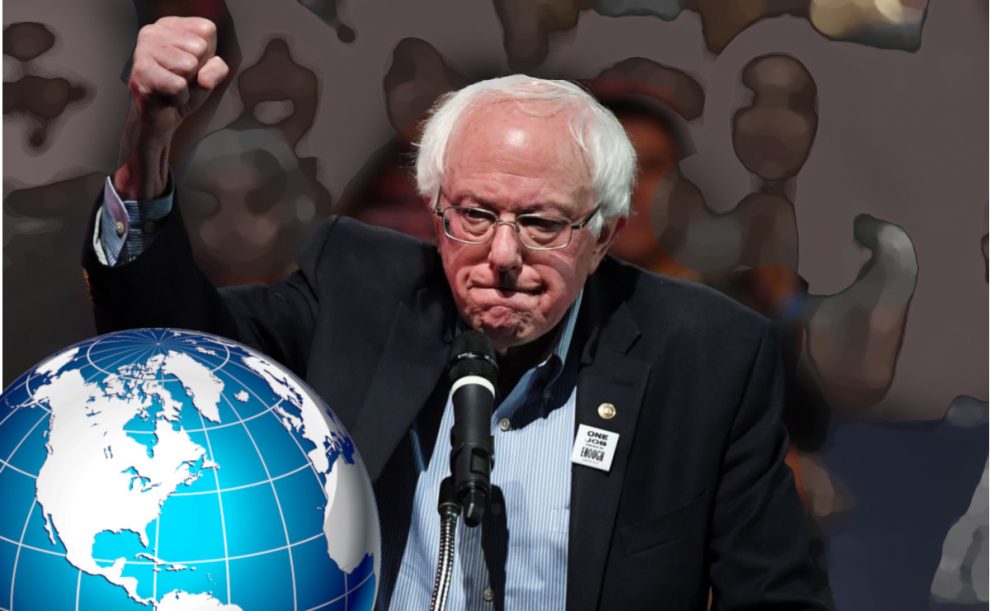 The U.S. Democratic Party, as many are aware, is already gearing up for a long campaign culminating in the November 2020 presidential election. To date, around ten individuals, most members of Congress, have declared their intention to run for the party’s nomination, which will be decided in late summer 2020. Between now and then, international observers will focus on each candidate’s foreign policy opinions.

The early front-runners have clearly identified one major flaw that the last decade’s Democratic hopefuls have suffered from: a conspicuous lack of experience on — or even concern for — foreign affairs issues. That weakness was exactly why Hillary Clinton spent 2009-2013 as secretary of state, to shore up her perceived foreign policy vulnerability in anticipation of her 2016 candidacy, and then published a book, Hard Choices, which covered a broad range of international issues and included detailed comments about Turkey. The same problem has already motivated several of the declared 2020 Democratic candidates to provide public statements on their foreign policy views.

The early Democratic frontrunners are Senators Bernie Sanders (Vermont), who lost the 2016 Democratic Party nomination to Hillary Clinton, and Elizabeth Warren (Massachusetts). Both candidates have a specific political style that mold their image, and their foreign policy stances are tuned to that image. Sanders uses rhetoric designed to differentiate him from other candidates, and which parallels his quirky and leftist approach on domestic issues.

Sanders spent the 2016 election season avoiding foreign policy issues as much as possible. In order to dispel an impression of weakness in that area, Sanders has already put effort into defining his stances on current key items in U.S. foreign relations. Recent articles in two of the U.S.’ most prominent political commentary sources, The Atlantic and Politico, noted that Sanders has focused on foreign affairs more than any of the other declared Democrats, [1] resurrected progressivist Democratic Party rhetoric from the World War II era, [2] and worked to find common foreign policy ground to unite potential Democratic voters. [3] Overall, commentators see Sanders posing a challenge to the U.S.’ notorious “exceptionalist” attitude towards international relations, which would naturally come as a relief to the entire world if he were able to implement such a change.

As a 20-year resident in Turkey, however, I am more interested in what Sanders knows and has to say about Turkey and the Eastern Mediterranean. Sanders’s political career has never brought him into extensive contact with Turkey or the issues important to its region. Sanders got his start in local Vermont politics as a mayor, and then entered the House of Representatives in 1990 as a self-declared socialist.

After 16 years in the House, Sanders was elected senator in 2006 and then reelected in 2012. The various congressional committees that Sanders serves on — the Veterans’ Affairs Committee, the Budget, Environment, and Public Works Committee, the Energy and Natural Resources Committee, and the Health, Education, Labor, and Pensions Committee — are all concerned almost exclusively with domestic issues.

Despite the domestic focus of his congressional activities, Sanders attached his name to the letter forwarded to President Trump in October 2017 by a group of Senators led by John McCain. That letter, sent during then-Ambassador to Turkey John Bass’ visa ban crisis, interpreted contemporary Turkish-U.S. relations in the same manner as the U.S. media, and urged Trump to demand that President Erdogan “respect human rights and the rule of law.”

Thus, in terms of his Congressional experience, Sanders cannot have acquired in-depth knowledge of the Eastern Mediterranean, even if he has spoken infrequently on topics related to that region. And signing on to McCain’s letter shows that, when it comes to foreign matters with which he has little familiarity, Sanders is adversely influenced by conventional wisdom and the media. That means we must look to Sanders’s foreign policy statements in order to glean exactly what he knows about Turkey.

Sanders’s Senate website has a small section devoted to international relations [4] and he has given several speeches aimed at informing the public on his views. The website material is brief, contains a picture from 2011 of Sanders with U.S. troops in Afghanistan, and mentions only Iraq, Afghanistan, and the Israel-Palestine conflict. Some of the information also seems to be out-of-date, referring to 2017 in the future tense. Turkey is mentioned only in relation to Iraq. None of the information gives the impression that Sanders has acquired either in-depth knowledge or profound understanding of the societies he mentions.

In Sanders’s recent speeches, he provided more exact information about his foreign policy ideas. In late 2017, Sanders was invited to give a speech at Westminster College, in Fulton, Missouri [5]. That speech was broad ranging, rarely went into details, and did not mention Turkey specifically.

Instead, that speech’s most striking features were the idealism that Sanders displayed and his willingness to directly and strongly criticize the foreign policy preferences of not just the Trump Administration, but of all of the post-World War II U.S. administrations. He even directly mentioned the CIA-sponsored coups in Iran and Chile. From that perspective, Sanders’s speech was interesting and refreshing.

Sanders gave a second foreign policy speech in October 2018, at the John Hopkins School of Advanced International Studies [6]. In that speech, Sanders presented a Manichean image of a world divided into two tendencies, one moving towards authoritarianism or entrenched inequality, the other moving towards enlightened and egalitarian democracy. For those interested in Turkish issues, the notable aspect of Sanders’s speech was his direct and extremely negative reference to Turkey:

“Even as he draws closer to authoritarian leaders like Putin, like Orban in Hungary, Erdogan in Turkey, Duterte in the Philippines, and North Korea’s Kim Jong-un, Trump is needlessly increasing tensions with our democratic European allies over issues like trade, like NATO, like the Iran nuclear agreement. Let me be clear, these are important issues. But the way Trump has gratuitously disrespected these allies is not only ineffective deal-making, it will have enormous negative long-term consequences for the trans-Atlantic alliance.”

You read that quote correctly: he puts Turkish President Recep Tayyip Erdogan in the same category as Kim Jong-un. That is stunning and disturbing. Sanders’ statement is simply repetition of the same clichéd errors repeated endlessly about Turkey and President Erdogan over the past five to six years in U.S. media. This indicates that Sanders has no personal knowledge or understanding of Turkish politics and society.

In the paragraph excerpted from Sanders’s speech, Sanders lists two categories of nations, but does not grasp that Turkey is actually in the “democratic European allies” that “Trump has gratuitously disrespected” category. If Sanders also wants to avoid “negative long-term consequences for the trans-Atlantic alliance,” he will have to either obtain much more accurate knowledge concerning Turkey, or find advisors that have that knowledge.

At the end of February, three advisors who played a key role in Sanders’s 2016 campaign abruptly left his organization. Concurrently, Sanders hired a new campaign director, Faiz Shakir, a son of Pakistani immigrants who will be the first Muslim to run a presidential campaign. Shakir’s arrival and the advisors’ departure were apparently unrelated. More importantly, whether Shakir’s influence will make a difference in Sanders’ comprehension of foreign affairs, or specifically of a foreign Muslim society such as Turkey, remains to be seen.

Shakir has advised Democratic Party politicians for more than a decade, and spent the past eighteen months with the American Civil Liberties Union, one of the U.S.’ most important civil rights advocacy groups. American leftists, on the other hand, have displayed no more ability to comprehend the last decade’s developments in Turkey than the U.S. right wing has. That means we cannot assume that Shakir’s knowledge of Turkey is extensive, or that his opinions about Turkey are more sophisticated. No matter what, efforts will have to be made to provide Sanders with more factual information about Turkey.

Where can Sanders start in understanding Turkey?

In his Westminster College speech, Sanders made a statement that echoed the Truman Doctrine: “Today I say to Mr. Putin: we will not allow you to undermine American democracy or democracies around the world. In fact, our goal is to not only strengthen American democracy, but to work in solidarity with supporters of democracy around the globe, including in Russia. In the struggle of democracy versus authoritarianism, we intend to win.”

Sanders’s statement indicates an expansive commitment to aiding those around the world striving to establish or preserve democracy. If Sanders intends to uphold that statement, he will need to recognize that the Turkish government and the Turkish people are committed supporters of democracy, who sacrificed their lives and physical well-being to preserve their democracy against those who wanted to take it from them in July 2016, in the defeated Fetullah Terrorist Organization (FETO) coup.

In fact, this touches on a greater problem in current U.S. foreign policy formulation. If Sanders truly wants to win the “struggle of democracy versus authoritarianism,” he will need the ability to discern differences between the political situations in various societies and avoid easy generalizations. Normally, advisors help a political figure accomplish that but, in the end, a politician must have the acuity, on her or his own, to digest the information provided to them and formulate a more nuanced understanding of the particular society in question. Whether Sanders has the capacity to do this remains unclear, but recent U.S. presidents have evinced little sign of such a talent. So we will have to scrutinize Sanders’s foreign affairs statements over the coming 18 months in order to identify whether Sanders can display a positive learning curve in regard to Turkey.