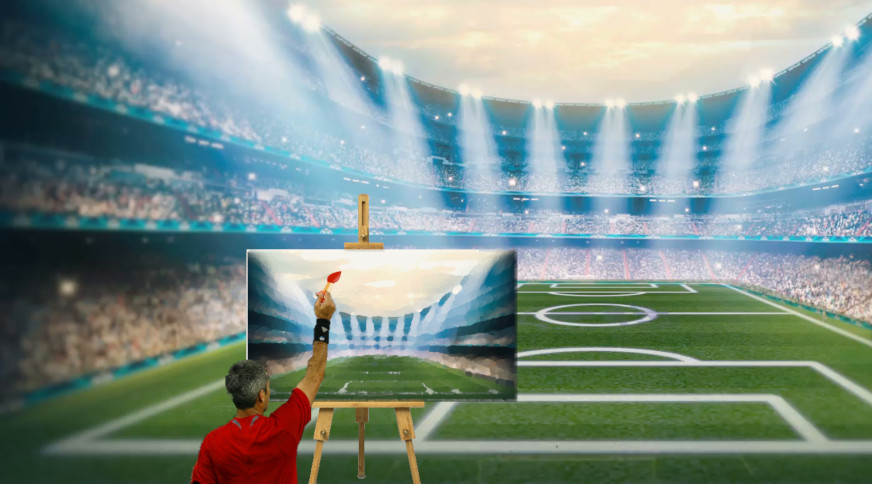 FIFA World Cup has become a kind of U.N. National Assembly people’s gathering, with a complicit web of relations among the players.

In a couple hours the eyes of the world will be turned to Russia for the opening ceremony of the 21st Football/Soccer FIFA World Cup edition. Thirty-two nations, 736 players, more than 3 billion viewers, 64 games, 12 stadiums, 112 referees and one winner. Every four years, much of the planet’s population lives the football festival with full conviviality for a month.

Twenty-two players and three referees perform as artists on a splendid green, rectangular pitch for thousand of fans cheering in the bleachers and billions in their living rooms and sport-bars appreciating the magical passes, beautiful goals, incredible technique moves, firm refs’ decisions and good coaching tactics that change the outcome of the game.

The World Cup festival is a gathering of humanity, millions of fans forgetting the worries of their depressed real-world affairs, intolerance, wars, famine, socio-economic struggles and injustice. This sporting event births a dream that might become true to millions of boys in the streets of Saõ Paolo, Buenos Aires, Lisbon, Dakar, Cairo, Tunis, Casablanca and Gaza or tough neighborhoods in France’s banlieues like la Seine-Saint-Denis (93), Paris, le Mirail, Toulouse and Quartiers nord, Marseille: one day they might become Neymar, Messi, Ronaldo, Sadio Mané, Mohammed Salah or ideally Zidane.

This edition is hosted by Russia. It is the first time such a worldwide sport event has been organized by Russia, a quarrelsome country because of the on-going world affairs’ geopolitical ambiance; in spite of the monopoly of the driving engines of national teams such as Brazil (la Seleçăo), Germany (Mannschaft), Argentina (l’Albiceleste), Spain (la Roja) even England (Three Lions) — yet this time Italy (Azzurri) four-times world champions and Holland (Oranje) three-times finalist are missing the party.

Those countries over the decades have produced for the footballistic world the most valuable players: Pelé, Beckenbaeur (Der Kaiser), Maradona, Santillana, Keegan, Rossi and Cruyff. But other countries also are becoming a reservoir of MVPs for the European leagues, like Egypt, Senegal and Nigeria. National teams bring their nations together, leaving their political turmoil, ethnic and communautarism behind after a big win of the world championship. As was the case of the (l‘Albiceleste) Argentina in 1978 and France in 1998 with the Black, Blanc, Beur motto.

This time, however, Didier Deschamps’ squad is going to be Black, Blanc and light on Beur. Who knows who might win in this edition: Germany defending world champs, Spain, Argentina or the wounded beast, Brazil was humiliated by the (Mannschaft) on its home court in the 2014 semi-finals.

The World Cup festival heals wounds and ease pains, at least, temporarily and bring people together, such a social joy could play easily into the hands of the oligarchic and tyrant regimes.

The World Cup has become a kind of U.N. National Assembly people’s gathering, with a complicit web of relations among the players. Each player has a dual football identity, belonging to his nation’s national team and a team in a league doesn’t need to be anywhere near his home country. Coaches for national teams can be from any nation. This creates an interdependency, a social phenomenon with all its human dimensions that provides a mission of inclusion, peace and hope to millions of children and adults around the globe.

Nonetheless, in the past some European leagues (Holland, Belgium, France, Spain and Italy) have seen regrettable behavior from the fans, bribery scandals and teams buying referees. Also, money becomes the engine that drives this popular sport — teams buy players and coaches offer them astronomical sums as yearly salaries. As a result, this creates a sense for the fans that the team lords are turning the players into modern gladiators, in particular when countries’ governments are in a deep economic crisis, and their governments are imposing austerities on the people.

The fans need some entertainment, but when they hear the yearly salary of their team coach and favorite player, they might regret that they did not choose the path of Neymar and Guardiola. These hurt the message and the fair-play spirit of football. Likely, fans do not care about these unvirtuous characteristics that are tainting so-called post-modern football. They still want to enjoy watching the game with passion, staggered by the performance of their star players and teams.

FIFA World Cup festival shows the rest of us how fans from all over the globe get along with their differences, color, religion and languages around a soccer ball. They share the beauty of the wonderful, utopian world, letting the triumph of tolerance win over intolerance. What a beautiful sporting event: nowadays the world has turned crazy, so let’s all be crazy about football this month! Good luck to all the nations and may the best of them win.