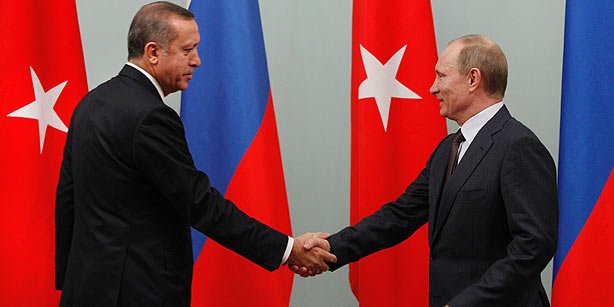 Could the rapprochement between Turkey and Russia lead to a long-term alliance or are both the countries simply cooperating for short-term gains?

Just ahead of Turkey’s Operation Olive Branch, Russia started withdrawing its military assets from Afrin, allowing Turkish jets to conduct airstrikes over the airspace controlled by Russia and the Assad regime.

Moscow has had a military presence in Afrin along the YPG since March. In December, Moscow even held a high-profile military meeting with the group to discuss possible military cooperation. All of a sudden though, it seems Russia has switched its allegiance to Turkey, abandoning the YPG in the process.

For the last few centuries, Russia has been the most significant threat to Turkey. It threatened Turkey’s territorial integrity and independence during the final stages of the Ottoman Empire and even after the founding of the Republic of Turkey. The two countries have traditionally been on opposing sides of nearly every major conflict. Continuing in the same vein in Syria, Russia is allied with the Assad regime while Turkey backs the opposition to Assad, and has consistently stated for years that Assad must go.

Yet, in recent months, Turkey and Russia have worked hard with one another to try and find a diplomatic solution to the crisis in Syria.  So what has made this possible?

On the Turkish side, the country considers itself to be in the midst of an existential crisis due to three main factors. First, almost two years ago, Turkey experienced a coup attempt which revealed the extent to which Fetullah Gulen’s terror group (FETO) had infiltrated the state structure. There has been an ongoing struggle to clear the state from FETO operatives and an effort to extradite Fetullah Gulen from the US.

Second, the persistent war in Syria damages Turkey not only due to a spillover of instability and conflict, but it has also taken a heavy economic toll on Turkey.

Last, the terrorist organisation the PKK –  that Turkey has been fighting for over 30 years –  has found itself a vacuum to take advantage of in northern Syria.

Turkey’s traditional allies have failed to stand by Turkey in all of these crises and the US which has refused to extradite Gulen, supports the PKK’s Syrian offshoot in the YPG, and has weighed in on the wrong side in Syria. Reminiscent of President Johnson’s Letter in 1964, once again Turkey feels abandoned and let down by its allies.

Turkey and Russia have significantly divergent and conflicting interests, yet both see a common goal in a resolution to the conflict. Within this context, Turkey sees Russia as a reliable partner to put an end to the political and economic instability in Syria.

Make no mistake; Turkey and Russia are not friends. Neither is there a bond of trust between them. This is a rational game of bargaining and negotiation. Both parties do not give anything without taking something in return.

Unlike Turkey’s relationship with the US, there is little room for misunderstanding here. Contrary to the US’ willful ignorance, Russia does not pretend to be oblivious to the fact that the YPG is indistinguishable from the PKK. Considering Turkey’s influence over many opposition groups in Syria, Russia is aware that working with Turkey has greater prospects for success.

Domestic political considerations are key to understanding Russia’s desire to end the war in Syria – preferably on its own terms.

The Kremlin wants to bolster its image ahead of presidential elections in March this year, as Putin does care about his public image and seeks greater legitimacy in the public eye.

Russian media has portrayed the Syrian war as a “crusade” to promote “traditional Russian values”. The Orthodox Church supported the Kremlin’s decision to intervene in Syria, both as a “war on terrorism” and to protect Christians in the Middle East. As this relationship has solidified, the church has integrated with the military.

Russian media frequently runs photos of priests blessing weaponry, including warplanes, while Orthodox clergy embeds with military units. Logically, this has created an image of the “Hero Putin”, with exhibitions portraying him in a range of heroic roles sending the message of “No Putin, no victory!”.

So what are the reasons behind the Kremlin’s objectives in Syria shifting from fighting a long “holy” war into one focused on a quick peace?

The Middle East is complicated, and perhaps Syria in itself created a power vacuum. Its policy and geography matters to Russia and they have ambitions to influence and control parts of the region. The largest natural gas field in the world lies under the Persian Gulf, in which Russia hopes to find a hand through Syria.

Pointing to Russia’s economic interest in Syria, arms trade between the two countries is substantial. Russia will do everything to be closer to the Middle East than the US is, and partake in “international intervention” in countries like Syria because it sees this as a Cold War style, anti-Western, anti-imperialist aspect of its policy.

A recent poll by the Moscow-based Levada Center found that nearly half of all Russians thought their country’s involvement in Syria should end. Russia’s “mission completed” can be viewed through Putin’s surprise visit to Russia’s Khmeimim air base in Syria and withdrawal of troops from Afrin, leaving it to the Turkish authorities.

Putin wants to offer his electorate a victorious conclusion of this great “crusade” and position his administration as the key player, which would win the game and bring peace to the war-torn country.

“I congratulate you!….The Motherland is waiting for you.” Putin told the armed forces. This moment of “victory” in Syria – as perceived by the Russian public – may help Putin increase attendance at the March Presidential elections by invigorating patriotism in voters.

Turkey and Russia are trying to strike a balance between pursuing their interests and accommodating the needs of the other. The real question is whether this short-term affair can turn into a long-term alliance.

As some Russian commentators claim, Russia agreed to the Afrin operation to try and drive a wedge between the US and Turkey. Nevertheless, the ambivalent US position in Syria and Trump’s lack of a coherent strategy, or policy, for the Middle East make Moscow’s overtures easier and a geopolitical partnership with Turkey more likely.

A major victory for the Russian administration would be to cause friction within NATO and damage relations between allied member states like Washington and Ankara. However, Ankara sees its Russian affair as a way of diversifying its already existing alliances. Yet, its traditional allies’ disregard for Turkey’s interests may cause a disillusionment and urge Turkey to invest more in other actors.