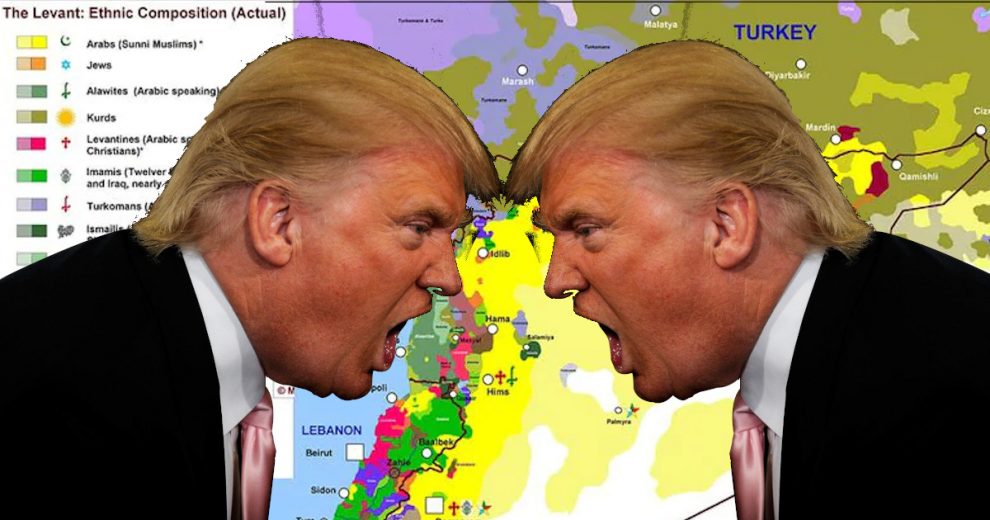 Unless there are more pressing things to do on the 13th of this month (or intricate political developments that only the statesmen know about), President Recep Tayyip Erdoğan must venture out a couple of good days and travel all the 5,218 miles just to see U.S. President Donald Trump and give him some talking points about how right he was when he ordered the boys and girls of the U.S. back home from Syria. Trump did that three times already only to reverse it later after those purported “grown-ups in the room” came up with their own arguments.

Naturally, those grown-ups never say things as they are but speak with words that Trump can understand. They don’t say this, for instance: “Mr. President, when one of your predecessors, Franklin Roosevelt, met the British Prime Minister Winston Churchill at Yalta in February 1945 to discuss how to end the World War II, that fat chap handed the keys to the Middle East capitals over to King Franklin as well as some maps drawn by French and British guys. Our military and diplomats looked at them and discussed it with the Yishuv [or Jewish community in Palestine] and they all agreed to change it. We don’t like to have a new Jewish state surrounded by Arabs. We thought it was about time to create what another predecessor of yours, Woodrow Wilson, promised a war ago: a Kurdish state.

We did that after we occupied Iraq, but unfortunately, we cannot do it that easily in Syria for a couple of reasons: Unlike the Iraqi Kurds, Kurds in Syria are not seeking independence. Therefore, we brought in Kurdish insurgents from Turkey and gave them the one-third of Syria, as well as the oil fields, armed, equipped and trained them.

Sir, your decision to withdraw all the U.S. troops out of Syria is very premature. We need to be there until the end of the Geneva Constitutional Talks and the elections they’ll have; later we will convince the rulers of the new autonomous Kurdish region to merge with the Iraqi Kurdish region. And our job won’t be done with that. We need more presence in the area because that new Kurdish entity will declare war either to [a] Iran, or [b] Iran and Turkey. Thus, the Wilson Map of Kurdistan should be realized now. We have revised it because there was no Israel in 1920. It now includes the eastern and northern Syria, all the way down to Israel.

Your pulling back our soldiers ruined this 100-year-old dream. Send them back.”

No, this won’t fly with Trump. He is only interested in Israel because his son-in-law sees good prospects of developing real estate business there. The endless wars are draining all the good money that could instead support the rich and famous to buy more homes and office buildings.

So, those grown-ups talk to him as if they are talking to a 5th grader:

“O the magnificent one. You didn’t mean to leave all the Syrian oil to Iranian mullahs and Russian czars who did not even come through with their promise to find some dirt on the crooked Hillary before the elections. Did you?”

Hence, another flip-flop on the total pullout!

President Erdoğan could make him see that the happy medium as usual in between of two extremes: No U.S. fortifications in Syria for a terror state created and run by the PKK terrorists from Turkey; nor a total U.S. withdrawal from Syria without helping the country heal from the trauma of the seven years of the civil war. Besides, the field should not be left wide open to Iran for his sectarian plots and to Russia for its chauvinistic political ambitions.

Syria’s ethnoreligious tapestry consists of Arabs, Kurds, Turkmens, Druzes, Shiites, Palestinians and Circassians-Chechens. All these people would benefit immensely from democratic and free elections. It obligates the disappearance of the PKK and its affiliates from Syria. Whenever there is political violence and ethnic terror in a country people’s will couldn’t come out freely in the elections.

Sure thing, Trump will see the rational thing to do after speaking with Erdoğan.