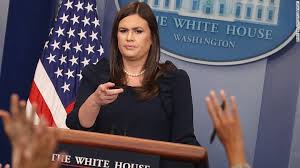 Well, this is not 100 percent kosher as far as examples from Syria and Iraq because politicians, U.S. diplomats and military officers are speaking from all sides of their mouths.

If you have one mouth and if you are an honest person, for instance, you would say that you do not support the independence referendum of the Kurdistan Regional Government (KRG) in northern Iraq, both before and after the fact. If you were an honest statesperson, you would observe the logical extensions of what you say. If you are against the referendum as the U.S. says it is, the day after you do not simply say you are very disappointed in the KRG. Preferably, you would say the U.S. government will not recognize the KRG’s illegal act and will continue to support the indivisible integrity of Iraq. You can embellish and emphasize your point that what KRG President Masoud Barzani did is not acceptable internationally, diplomatically or politically.

Yes, you may, like everyone else, appreciate the dreams of some Kurdish intellectuals yearning for a state for a long time, but the realities of the region make regular Kurdish villagers or townspeople happy with what they have: land, democratic rights and freedoms to enable their children to live in a better and more prosperous Iraq, Iran, Syria or Turkey where they are integral parts of their respective countries. Yes, you may be aware of the difficulties Iraqi Kurds are experiencing since the U.S. ruined their political system under the banner of the “war on terror.” The Iran-backed Shiite elite filled the political vacuum this war created, and Kurds became the prey of sectarian violence between Sunnis and Shiites.

But if you are already building a $600 million monster of a consulate building in Irbil, the capital of Iraqi Kurdistan, of course your reaction to the first step of cessation from Iraq could be simple disappointment from which we can safely assume that you will recover speedily.

Almost all people in Turkey are watching their mouths and incredible ability to utter different words simultaneously in Syria too. It takes enormous talent to say different things about the same subject to different people. They pat one on the shoulder, claiming they are such good friends while sneaking a revolver into the other’s belt to rob them in a second. Russia proved with aerial images that Daesh terrorists are leaving towns to the U.S.’s People’s Protection Units (YPG) allies without shooting one single bullet. So probably 5,000 16-wheelers full of arms and military materials had been meant to be used somewhere else. Had they not? So, when they say their operations are limited to the fight against Daesh, it is not what they mean. What about the assurances for Syria’s territorial integrity? Is it also sleight of hand, my dear friend?

Democratic Union Party (PYD) Co-Chair Salih Muslim can be as pliant as Barzani and forget all the animosity between them and deliver weapons to his Iraqi brethren. Barzani’s peshmerga had helped them when they were creating their first cantons in Syria under their watchful eyes, after all. What are brothers for?

We understand they need more things to distract the American people with North Korean threats, calling their dear leader names, and to NFL players protesting during the national anthem. The more, the better. We have a hunch that they and their top-level advisors do not even pay attention to what the other sides of the collective U.S. mouth at the State Department, at U.S. Central Command (CENTCOM) and other places are saying.

But we listen to them all, and we are not amused by what we are hearing. How can we trust U.S. politicians and diplomats when we know they are speaking out of both sides of their mouths?