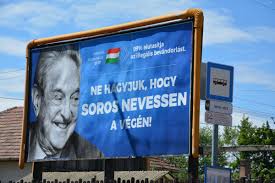 A global rise of nationalist and populist tendencies has not only given anti-migrant, Islamophobic, anti-Semitic and racist tendencies a new lease on life, but opened the door to alliances between groups that once would have had nothing to do with one another.

Developments in Israel, Indonesia and Germany suggest renewed nationalism and populism is in some cases redefining how states perceive concepts of national interest and purpose and how religious and ethnic communities seek to shield themselves against discrimination, persecution and/or extremism.

The redefinition was no more evident than when Israel, founded as a safe haven for Jews irrespective of creed, sect or political belief, sided against its own ambassador with authoritarian Hungarian President Victor Orban, a proponent of Christianity rather than multi-culturalism as the glue of European society, in denouncing billionaire left-wing philanthropist George Soros, a survivor of the Holocaust.

In doing so, Israel, founded on the belief that Jews needed a state to shield themselves against discrimination and persecution rooted in anti-Semitic prejudice and racism that has been endemic in Christian culture, sided not only with a Christian nationalist leader in Hungary but with a global right-wing trend that sees Mr. Soros as the mastermind of a globalist movement, determined to subvert the established order and dilute the white, Christian nature of societies through immigration.

Israel’s acknowledgement of the redefinition of its raison d’etre came in response to a Facebook posting by Yossi Amrani, the Jewish state’s representative in Hungary. Responding to anti-immigration billboards depicting a smiling Mr. Soros with the slogan, ‘Let’s not let Soros have the last laugh,’ Mr. Amrani, backed by Hungarian Jewish leaders, warned that they evoked “sad memories, but also sow hatred and fear.”

Israel’s foreign ministry, days before a visit to Hungary by prime minister Benyamin Netanyahu, rather than taking a firm stand on rising anti-Semitism, effectively defined the Jewish state’s interest as joining Mr. Orban in denouncing a Jew.

As a result, Israel, despite seeing itself as the fulfilment of  the Biblical prophecies of the Ingathering of the Exiles and the protector of Jewish rights, opted for denouncing a Jew together with a leader whose policies prompted the European parliament to pursue unprecedented disciplinary action against Hungary over alleged breaches of the European Union’s core values, including minority rights.

“In no way was the (ambassador’s) statement meant to delegitimize criticism of George Soros, who continuously undermines Israel’s democratically elected governments by funding organizations that defame the Jewish state and seek to deny it the right to defend itself,” the ministry said.

The implicit message, like Israel’s decision to bar entry to its Jewish critics despite its law of return that grants anyone who is Jewish a right to citizenship, was that Israel rather than being the potential home of all Jews was a home only to those who support the government’s policies.

Mr. Netanyahu’s alignment of Israel with right-wing nationalist and populist forces like his support for ultra-orthodox Jewish groups that deny equal rights for less stringent religious trends in Judaism on issues such as marriage, divorce, conversion and prayer at Jerusalem’s Western Wall, are likely to drive a wedge between the Jewish state and world Jewry, particularly in the United States.

The wedge, that puts Israel at odds with the Jewish Diaspora, could be deepened by this week’s Democratic Party success in regaining a majority in the US House of Representatives. Jews historically tend to vote Democratic in the US, a stark contrast with Mr. Netanyahu’s growing alliance with right-wing evangelists who support Israel because they believe the Messiah will only return to a Holy Land controlled by Jews.

Many evangelists, however, also believe that Jews will not be saved on the Day of Judgement without first converting to Christianity.

Israel’s divisive approach to World Jewry is not without its supporters in the Jewish Diaspora. Anti-Muslim and anti-migration sentiments have prompted some Jews to form their own group within Germany’s far-right Alternative for Germany (AfD) political party.

The notion that bigotry and prejudice are the best defense against rising anti-Semitism has meant that AfD Jews have little compunction about joining a party whose members favour abandoning Germany’s culture of remembrance and atonement for its Nazi past.

One AfD leader, Alexander Gauland, described Nazism as a “speck of bird poop in more than 1,000 years of successful German history.”

To be fair, the issue of rising prejudice and bigotry is not the exclusive perch of right-wing nationalist and populists. Britain’s Labour Party, traditionally a home for Jewish voters and activists, has been plagued by charges of anti-Semitism and reluctance to put its own house in order.

Moreover, the emergence of strange bedfellows in a world in which ideological affinity replaces defense of a community’s minority rights is not uniquely Israeli or Jewish.

Nahdlatul Ulama, the world’s largest Islamic movements with some 94 million members in Indonesia, in a bid to reform Islam and counter all political expressions of the faith, risks being tainted by its potential tactical association with Islamophobes and Christian fundamentalists who would project their alliance as Muslim justification of their perception of the evils of Islam.

Nahdlatul Ulama is not alone in the Muslim world’s opportunistic engagement with the Christian right.

Saudi rulers, who long aligned themselves with a supremacist, intolerant interpretation of Islam that viewed Christians as swine and Jews as apes have discovered that they share with evangelists and fundamentalist Christians, a significant voting bloc in the United States and part of President Donald J. Trump’s support base, conservative family values as well as political interests.

The jury is out on whether the fallout of the rise of nationalism, populism and extremism heralds a new world in which bigotry and prejudice are legitimized as a defense strategy against discrimination, racism and persecution and an anti-dote to radicalism – a world that would likely prove to be far more divided and polarized and likely increasingly unsafe for minorities on the receiving end.

Turkey is ready to punish YPG for recent attacks