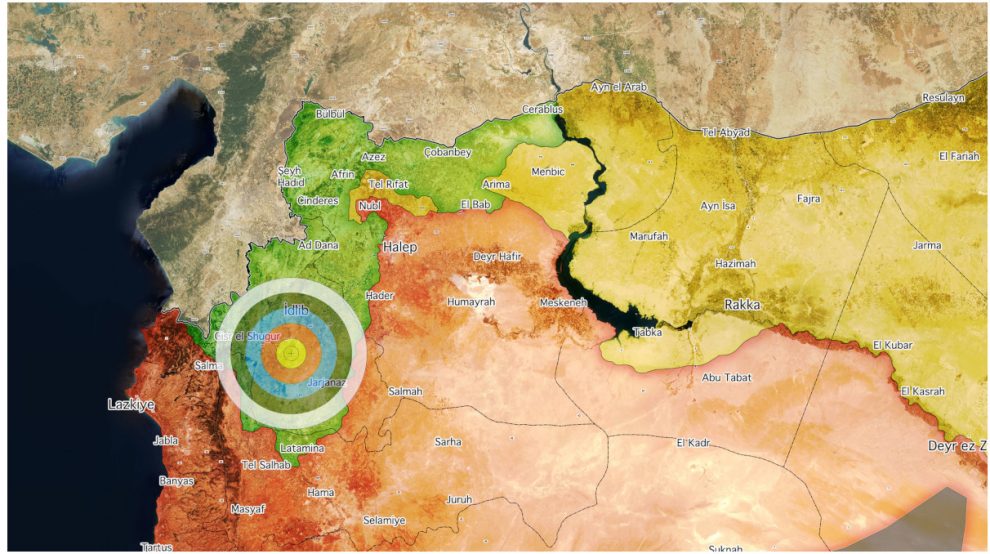 Analysis: The Turkish-backed rebels are understandably praising Turkey’s efforts to avoid a bloodbath in Idlib, but confusion remains over exactly where they are to be, reports Ömer Özkizilcik.

On September 17, Turkish President Recep Tayyip Erdoğan and Russian President Vladimir Putin agreed a Memorandum of Understanding regarding the fate of Idlib.

With this “Sochi deal”, a Russia- and Iran-backed regime assault on Idlib was avoided, and both Russia and Turkey agreed to establish a 15-20km demilitarised zone between the regime and opposition forces.

According to the document, all heavy weapons will be withdrawn from that zone by October 10, and all “radical terrorist elements” will be removed by October 15.

With two weeks to go, the armed opposition in Idlib still distrust Russia and the Assad regime – despite their trust in Turkey.

The declared demilitarised zone in Idlib has confused many within the armed opposition. While most expected such an area to be established on regime-held and opposition-held territories along the front line in Idlib, latest reports from Nedaa Syria suggest that it will be only in currently opposition-held areas.

Jaysh al-Izzah, a Free Syrian Army faction based on a strategic frontline in northern Hama/southern Idlib, published a statement rejecting the establishment of a demilitarised zone only in opposition areas. The leadership of the faction had previously made more supportive statements about the Sochi deal.

Naji Mustafa, the spokesman of the National Front for Liberation, also stated that Turkish authorities told the opposition that the demilitarised zone would be limited to opposition-held areas.

Despite these reports, the boundaries of the zone seem unclear. Turkish sources claim technical discussions with the Russians are still ongoing. A further Turkish official who wished to remain anonymous also told The New Arab talks were continuing.

Nevertheless, the armed opposition seem to be irritiated.

Idrees al-Raad, from the political office of Faylaq al-Sham – probably the largest Turkish-backed faction in Idlib – told The New Arab that he still did not know if the demilitarised zone would be implemented on both sides of the frontline or only in opposition-held areas.

A source within Ahrar al-Sham also pointed to the reports of Nedaa Syria, saying he also didn’t know the boundaries of the demilitarised zone.

Another source of confusion was the alleged entrance of Russian forces into opposition-held areas which led to serious confusion within the armed opposition. After talks with Turkish authorities, the Turkish-backed National Front for Liberation declared they had been assured that no Russian forces would enter their territories.

They have been joined by Ahrar al Sham, Jaysh al-Ahrar, the Nureddin Zengi Movement and Suqour al-Sham.

The main concern for the armed opposition is their years of experience with the Assad regime, Iran and Russia.

The armed opposition has stated that they don’t trust any of them. Previous experience in the “de-escalation zones” in Daraa, eastern Ghouta, and northern Homs – which were all captured with military means by the regime – is the principal source of distrust.

The arrests of “reconciled” opposition fighters in southern Syria also increases concerns over any Russian assurances.

Despite a cessation in airstrikes on Idlib, regime forces on the front-lines still shell opposition-held areas, which only widens the trust defecit and aggravates the implementation of the Sochi deal.

“The regime still shells villages and locations in Idlib,” said Naji Mustafa of the National Front for Liberation. “Especially areas close to the front lines.”

Nasr al-Akl, spokesman of the Second Army, said the regime’s heavy armoury still remained on the front-lines, while regime forces shell opposition positions and villages in the northern villages of Hama, the eastern countryside of Idlib and the northern Aleppo countryside.

A senior figure in the Nureddin Zengi Movement who asked to remain anonymous, explained his group fear a quick regime assault on fortified positions after the withdrawal of rebel armoury, breaching the main defensive line of the armed opposition.

However, Idrees al-Raad of Faylaq al-Sham said there wasn’t any important point for concern. According to him, the armed opposition will retain neccessary equipment and units in the “demilitarised” zone, and Turkey will ensure no violations by the regime.

Another Faylaq al-Sham figure, Omar Hudheifah, published a statement on social media, stating the Turkish army would deploy heavy artillery within the “demilitarised” zone if necessary to repel any regime attack.

A common understanding among the armed opposition seems to be the view towards Turkish efforts.

Naji Mustafa of the National Front for Liberation said they saw the Sochi deal as a success of Turkish diplomacy, as a Russian-backed regime assault in Idlib would be a disaster for at least four million civilians there.

He also said that the role of the armed opposition strenghtened the Turkish position in the negotiations.

The anonymous Nureddin Zengi Movement figure, meanwhile, described the Turkish role as “wonderful”, but stated that the Syrians still aspired for freedom and justice. This deal, he said, would allow the opposition to reorganise and bolster their forces.

Nasr al-Akl of the Second Army also described Turkey’s effort as “a great success”, maintaining that Turkey remained the main supporter of Syrians who demand freedom.

Idrees al-Raad of Faylaq al-Sham added: “The success of the Turkish role in the Astana process was crowned by the recent agreement in Sochi, which was reflected in a clear desire of the people of Idlib. The Turkish brothers are securing the region, protecting and restoring stability and providing basic services for the people.

“Turkey has been able to gain the confidence of the local community in Idlib. This is the result of Turkey’s efforts in all humanitarian, political and military fields in the region. The role of the Turks in Idlib today is more important than any previous stages and the people of Idlib and the Syrians will not forget what Turkey has done for our people.”

Impacts of the Sochi deal

The armed opposition expect the Sochi deal will have wide-ranging implications.

“At the level of civilians, a sense of relief evolved, and civilians got rid of the spectre of war and returned to their daily lives,” said Idrees al-Raad. “On the military level, the area has been protected from ground and air attacks, allowing the factions to relocate and arrange their work, gaining more time for their benefit. On the political level, the agreement may pave the way for countries to start arranging the political process, the activation of the Constitution Committee and talk about a future without Assad.”

The Nureddin Zengi Movement member said that people had been reassured, with business activity and economy increasing since the deal had been reached.

Abdulwakeel al-Shahoud, a teacher in Idlib, told The New Arab: “The Sochi deal has in an excellent and amazing way, changed the psyche of citizens, and a smile has appeared on everyone’s lips.”

Ömer Özkizilcik is the editor of Suriye Gündemi, a Turkish news site about the Syrian conflict.