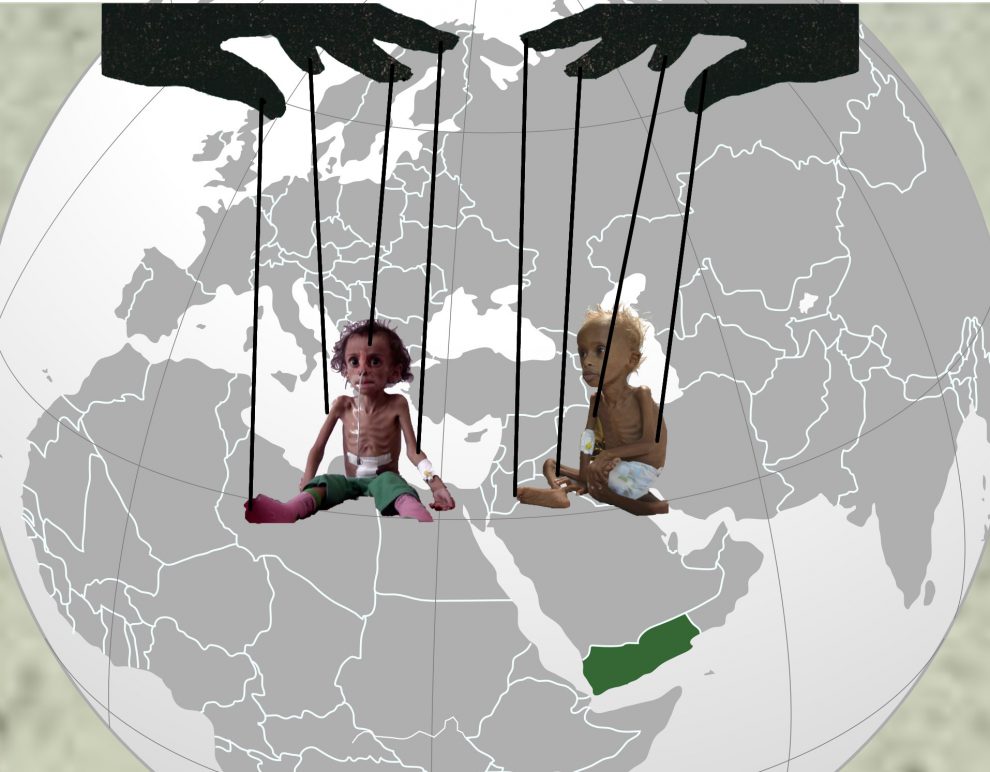 In Yemen, where the revenue form one year’s oil exports could make everybody prosperous, people are now facing the worst public health and food crisis imaginable due to the civil war supported by international actors

Yemen had an internationally recognized government for more than three decades. Its leader Ali Abdullah Saleh, a revolutionary in the sense of Fidel Castro, took power in Soviet-influenced north Yemen in 1978, fought to unify his divided country and then ruled it until he was killed last December.

The Arab Spring reached the Yemeni shores in 2011. Following months of protests, Saleh’s reign ended after he signed a deal brokered by the Gulf Cooperation Council (GCC), in which he agreed to step down. After the demise of the Soviet Union, the North had gone under the influence of Iran and Ali Abdullah had become their proxy in the region. But his reign was defined by charges of corruption and mismanagement: Yemen, once a beacon of prosperity, free health and human services in the whole Gulf region had become poorest country in the world, with widespread unemployment and persistent inflation, its billions of dollars in oil revenues embezzled or wasted. Once a great unifier and savior of Yemen, Ali Abdullah had been reduced himself to a beggar of American aid, and 40 percent of Yemen’s population lived on less than $2 a day.

The deputy of Saleh, Abd-Rabbu Mansour Hadi replaced him while the Shia Houthi rebels in the north and the separatist tribes in the south had started a civil war. Iran supported the Houthis, and the Saudis sided with the tribes. Hadi escaped to Saudi Arabia and the Saudis started indiscriminately bombing the Houthi held areas.

Ali Abdullah couldn’t do as an ordinary citizen after 33 years of absolute power during which he amassed 60 billion U.S. dollars embezzling the oil revenues. After 4 years in exile he re-emerged as an ally of the Houthi fighters in 2015. But neither Houthis, nor the Saudi-led Gulf coalition liked his coming back. In December, he broke ties with the Houthis, expressing his openness to talks with the Saudi-led coalition. But days later the Houthis blew up one of Saleh’s houses. He was killed by the rebels in a rocket-propelled grenade and shooting attack on his vehicle.

Now the dirtiest, the most inhuman proxy war is being fought in Yemen. In a country where the revenue of one year’s oil export could make everybody prosperous again people are facing the worst public health crisis in the world.

Some 60 percent of the children under the age of 3 years are suffering from malnutrition; and 20 percent are dying within a year. On top of everything Yemen is hit by a second outbreak of cholera this year.

There are no basic public services because of the violations of international law by both the Houthis and Saudis. President Trump is continuing support for the Saudi-led war in Yemen. When first organized that coalition included the Gulf countries, Jordan, Egypt, Morocco, Senegal and Sudan. Qatar was expelled from the coalition in June 2017, after Saudi Arabia accused it of supporting terrorism. The U.S. did not join in direct military action, and its focus was on providing logistics and intelligence support for the coalition’s air campaign. The Saudis are buying U.S. arms worth more than one billion dollars.UNICEF predicts one child dies every 10 minutes from a disease that could be prevented by stopping the hostilities and spending 50 million dollars immediately. Other world bodies hope that by pressuring donors to deliver on already pledged resources and by supporting humanitarian advocacy efforts to protect and promote access to health and other essential commodities and services, cholera can be stopped.

While the rich Arab countries watch this human tragedy, Turkey in reaching out to the Yemeni people. President Hadi last month hailed Turkish aid to his war-torn country. Hadi praised Turkey’s support for Yemen and the country’s constitutional legitimacy in international areas. Meanwhile Turkey’s IHH Humanitarian Relief Foundation has been providing food aid to the people of Yemen.

It is not a war in Yemen, but a war in the Muslim world.

Daring to remove verses from Qur’an
Crocodile tears in the land of crocodiles:What New York Times Did not Mention about Hakan Sukur
Comment