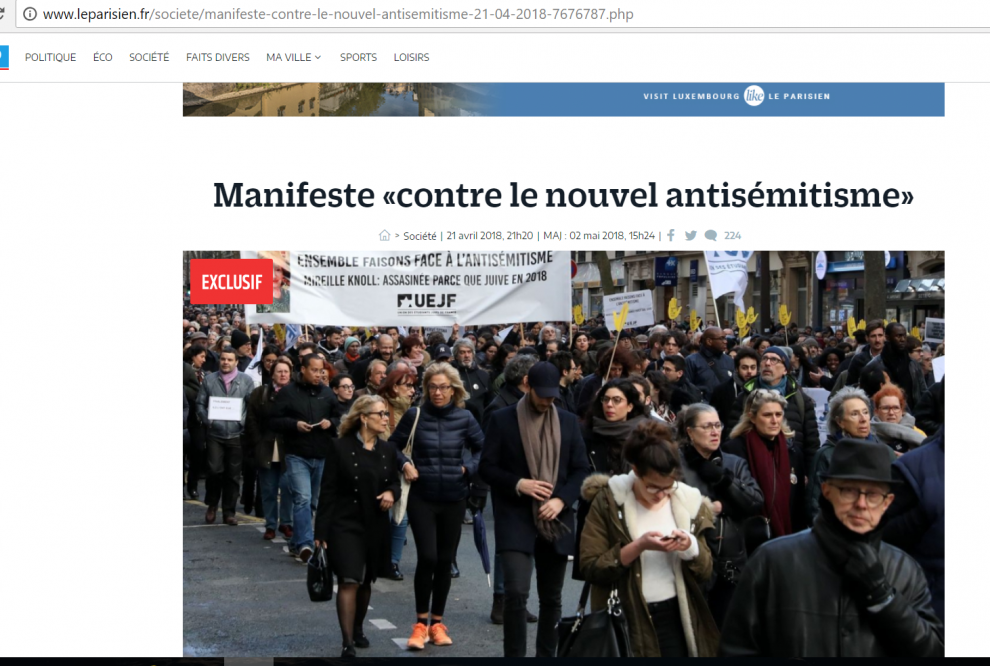 Some prominent French intellectuals and politicians, including former President Sarkozy and Prime Minister Valls, got a manifesto published in French daily Le Parisien in April 21 and asked removal of some verses from holy Qur’an, arguing that “the verses of the Quran calling for murder and punishment of Jews, Christians, and nonbelievers be struck to obsolescence by religious authorities,” so that “no believer can refer to a sacred text to commit a crime.”

The manifesto was published one month after a Holocaust survivor, Mireille Knoll, was stabbed to death. Another Jew, Sarah Halimi, was also beaten to death last year. Attackers of both victims allegedly yelled “Allahu Akbar” when committed the act. According to French authorities, 11 Jews were killed in last 10 years. However, the common belief about the reason of killings is not Muslim anti-semitism. The motivation looks to rob Jews who are supposed to have money.

According to some France based journalists, those signing the manifesto are either under the pressure of Jewish lobby or have good relations with them. Whatever forces them to attempt such an act, it is obvious that they are already prejudiced and biased against Islam and probably have not read Qur’an even once. Besides, many figures signing the manifesto had already unveiled their hatred to Islam long before mentioned murders. Therefore, atrocities against French Jews seem to be used as an excuse to attack Islam and Muslims.

Aforementioned guys may be blind to Qur’an’s view of non-Muslims but we all know that the holy book does not order  Muslims in none of its chapters  to kill or hurt Jews or Christians. Islam sees people of other faiths as dimmah, who are under protectorate of Islamic state in return for a certain amount of tax.  Moreover, Muslim countries never forced non-Muslims to convert to Islam. Ottoman rule may be a good example for our argument. While there were millions of Christians with various sects and Jews  living on Ottoman territories, no subjects were forced to change their religion. This fact can be verified in Balkans, Eastern Europe or Middle East. Whereas, all colonies of Western countries were forcibly, as the Bible allows, Christianized. In addition, it was Catholic Spain that expelled Jews in 15th century and it was Muslim Ottoman Empire that welcomed them.

As for profile of murderers that killed Jews in France, we don’t know how many of them are Muslim but news stories already revealed that they were drunk when killing their victims. So, they are not pious Muslims that committed homicides by reading Qur’anic verses. What is more, a good practitioner of Islam avoids such attacks as he knows individuals are not authorized to kill anyone regardless of his/her being Muslim or non-Muslim.We can argue that Muslim world has a brilliant history in regard to their relations with non-Muslims. If Qur’an had really ordered persecution of Christians or Jews, today’s Serbs, Hungarians, Spanishmen, Greeks, Assyrians, Marunits, etc. would either be non-existent or be Muslim converts. It is certain at least that ancestors of signors of the manifesto were not so tolerant to their subjects. Not so long ago but just in 1960s, the French killed 1 million Algerians, not mentioning their massacres in Africa and Indochina. Ironically, sons of perpetrators of ethnic cleansing now accuse Islam of being a religion of violence.

Another bizarre aspect of the issue is that politicians like Sarkozy themselves have no good records of respect to other cultures and religions. They don’t hesitate to reveal their discriminatory behaviors and policies against migrants. Hence, their role in provoking marginal groups should not be underestimated. It won’t even be wrong that homicides committed in France is an internal problem of that country and reasons behind such incidents should be seeked in France’s apartheid policies. What is happening in France can be deemed as a reaction of immigrants who are not allowed to be equal citizens of France. Attacking Qur’an is just a political action of those with Islam hatred.

Finally, it is not business of non-muslims to dare to change verses of holy Qur’an. Muslims’ holy book is not a property of France, nor scriptures written by human beings. Since Qur’an consists of only the words of Allah, even Muslims can’t dare to make any amendments. Besides, Qur’an is protected by its own author, Allah. Any actors that attempt to remove verses from Qur’an will face curse and punishment of Allah. Everybody is free to test consequences.

In Israel, extremist rabbis are becoming the norm
The most inhuman proxy war in Yemen
Comment