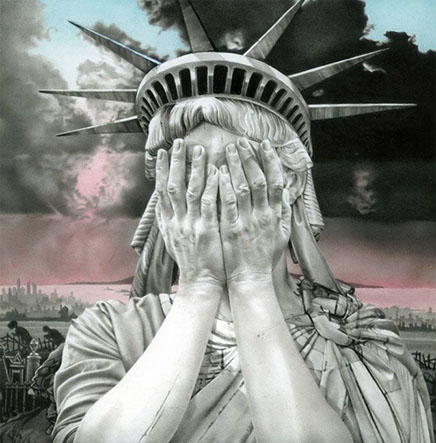 In 1791 the first ten amendments to the United States Constitution were ratified; this is known as the Bill of Rights. The Bill of Rights guarantees important rights to the people, rights such as freedom of religion, freedom of speech, equal treatment, equally enforced laws and due process of law.

This principle of equal rights and the need for an independent judiciary was deemed so important that only a Constitutional Amendment can change the pertinent amendments found in the Constitution.

The United States of America prides itself in abiding by the rule of law both at home and abroad, laws that are consistent with the international human rights norms and standards.

Fast forward 226 years and we find ourselves in a precarious situation where the rights of the people, at home or abroad are continually violated; the rule of law has become a tool that is utilised by the United States government whenever and however it sees fit. It does not hold itself to the same standards and principles to which it holds others.

The mainstream media is another tool that is used effectively to provide the appearance of the United States government upholding the rule of law yet its transgressions are ignored or euphemisms are used to camouflage or whitewash the severity of its violations thereby keeping the people in the dark.

One perfect example of this is in the case of the U.S. military actively supporting the Saudi siege of Yemen. The situation in Yemen is ongoing and it is absolutely devastating where millions of civilians are suffering, yet the mainstream media completely ignore the role the U.S. is playing in assisting the military operations of Saudi Arabia.

Here’s a story about Yemen by CBS News: “When food is used as a weapon”

Here’s a similar story published by The Washington Post: “Yemen is on the brink of a horrible famine”

There are many others. What you’ll notice is the lack of coverage with respect to the role the U.S. military has been playing, this isn’t by accident, it is purposeful.

Human Rights Watch (HRW) noted the support provided by the United States and released a statement saying “the United States may have become a party to the conflict [in Yemen], creating obligations under the laws of war”.

Eisenhower warned us in his farewell speech about the military-industrial complex; how the nation’s military allying with the arms industry, business and political leaders who are driven by mutual interests, who could then influence public policy and by extension flout the rule of law.

Add to this mix the big business of the mainstream media and you have yourself a perfect description of the real leaders of the world.

This idea of freedom of speech and freedom of the press is highly suspect. We are given the illusion of having freedom of speech, however it is always bound within certain legal perimeters that are influenced by this military-industrial-media complex.

Those who peacefully protest against the state and the injustices they may have suffered are immediately represented as a violent mob. This is especially true if the protesters are not “class-privileged”. The police who use force to break up peaceful protests, who douse civilians with chemical weapons like pepper spray are represented as maintaining peace and order, the police never engage in “violence”, which is a term that is exclusively used by the mainstream media for those who disrupt the established order of the society and state-power.

The mainstream media will not discuss anything that reveals what lies underneath the veneer of the United States narrative. For example the U.S. drone policy, which saw the deaths of innumerable Afghani, Pakistani and Yemeni civilians under the guise of targeting terrorists, don’t get much of a mention on our screens. Former CIA employees highlighted the travesty of this policy in one particular report:

“From the perspective of many around the world, the United States currently appears to claim, in effect, the legal right to kill any person it determines is a member of al-Qaida or its associated forces, in any state on Earth, at any time, based on secret criteria and secret evidence, evaluated in a secret process by unknown and largely anonymous individuals—with no public disclosure of which organizations are considered “associated forces” (or how combatant status is determined or how the United States defines “participation in hostilities”), no means for anyone outside that secret process to raise questions about the criteria or validity of the evidence, and no means for anyone outside that process to identify or remedy mistakes or abuses.” One simple but heartbreaking example of this atrocious “secret process” which makes a mockery of the rule of law the United States government pretends to uphold is that of the 8-year-old American girl Nawar who was brutally murdered by an approved U.S. drone strike in Yemen.

The United States has been involved in many overt and covert operations abroad that are clearly in violation of the rule of law and human rights. I’d like to draw your attention to some of these.

By no means is this an exhaustive list, it is merely scratching the surface in exposing the duplicity of the United States of America as it invokes the rule of law when penalising regimes, states or individuals it is at odds with but it freely flouts the law whenever it’s in its baleful interest to do so.

What’s important to understand is that the United States government in each case has denied any involvement in these uprisings or coup d’états. It’s only through eyewitness accounts or the Freedom of Information Act when relevant documents are declassified after some time (when all is done and dusted) do we get to find out about some of these vicious and blood-curdling operations:

Turkey suffered another brutal coup attempt on 15th of July 2016. It would be of no surprise to anyone in Turkey if the United States was also assisting the rogue military elements who carried out this coup attempt. It is still too early to point the finger directly at the United States however similar to the previous coups, there were many signature steps that were taken by the perpetrators which implicate the United States.

President Erdogan possibly hinted at the involvement of the U.S. at one stage by saying “if we revealed all that we know, there would be an international crisis”.

The Law of The Jungle

Based on the ruthless acts of the United States, violently enforcing its will on the people of the world, it’s no stretch of the imagination to claim that it in no way upholds the rule of law.

The United States deems itself above the law, ignoring the supremacy of the law, there has been no accountability to the law despite its numerous violations. It is thus the peak of hypocrisy for the United States to demand that people and sovereign states abide by the rule of law when it sees it only as a facilitator for the abuse of power.