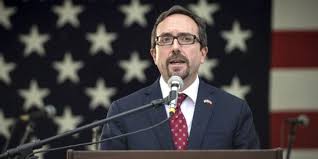 The visa crisis is neither the first nor the last crisis that causes tension in Turkey-USA relations. The Johnson Letter on Cyprus  having Prime Minister İsmet İnönü in 1964 said “A new world is established, we will take our place in this new world”, is far behind . Yet,  didn’t Cyprus, this time in 1974, become the reason for US embargo?

The source of tension that brought Turkish-US relations to the point of breaking was the rejection of the March 1 Act of 2002 which was refused by the Turkish Grand National Assembly. This brought the Pentagon and the Turkish General Staff’s relations to a breaking point. The US did not take revenge of the rejection of March 1 with only putting heads of Turkish troops in sacks in Iraq. Sledgehammer-like lawsuits aiming to clear the command levels of the army that just watched refusal of the act in the parliament by FETO prosecutors were also a US-guided retribution.

A series of crises

The arrest warrant for President Erdogan’s guards , the arming of the PYD / PKK by the US, the ban of sale of guns to the presidential guards, and the  ban of sale of weapons to reinforce Turkey’s defense system by Congress were each reasons of the crisis. But most importantly, despite evidences proving Fetullah Gulen was trying to take over the state and organized the coup attempt, the crisis of embracing this person instead of extraditing him by the US was on the agenda. In addition, the suspicion that the July 15, 2016 coup attempt was previously known by the United States is also highly controversial.

The last crisis broke out with the arrest of one of the officers with FETO links working for American Consulate in Istanbul. This was followed by suspending visa procedures for the Turks, and then Turkey’s  same response to it.

Of course the real question is;  Is the US trying to break the rope with Turkey?  Is Trump who said “Erdogan is my friend,” a puppet? Is not this crisis enough for USA  which fights Iran, North Korea, Venezuela, Cuba, andf Mexico? And we wonder into what Ambassador Bass, who initiated a crisis with allied Turkey for nothing,  will turn into occupied Afghanistan, which is his next destination.

*This article was published in Sabah daily newspaper in 10 October 2017. Straturka editorial team translated it into English.

Mr. Mehmet Barlas is a columnist at Sabah daily newspaper, based in Istanbul.