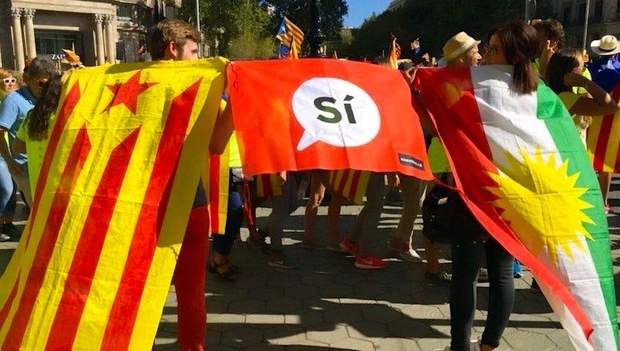 We can make a reliable evaluation of the referendums in Catalonia and North Iraq only based on the evaluation of both societies in geographical, culture , ethnic and historical terms.  Even if we address all these factors, there might still be some other factors  that have went unnoticed and it must also be taken into consideration that the evaluated features may exhibit  differences within the course of time.

In this article we intended to subject both societies to a sociological analysis and put forward the realism of referendum and whether these referendums have justified grounds or not.

Symbols, beliefs, values, forms of behavior and norms shape the human communities that we call society and the historical structures and cultural objects reveal the togetherness of society for a definite period of time.  When we examine the Catalan and Kurdish societies from these points of view we see that there are approximately 7.5 millions of people who feel themselves gathered around these values approximately for 1000 years. Museums are one of the best indicators revealing the togetherness of human community for hundreds of years.

There are 68 museums, small and big, only in Barcelona. The historical memory of Catalan region is exhibited in various museums including history, archeology, modern and antique art and military museums that cover all areas of life and this strengthens the sense of unity and togetherness of people living in the region.  There are hundreds of museums all over the Catalan region. There are 5 areas under the protection of UNESCO under the scope of world inheritance. The total number of large historical archeological settlement areas is 47 and they are open to visits of tourists.

There are hundreds of small and large libraries in Catalonia, National Library of Catalonia which was opened in 1907 being the largest one while there are 21 old and well-established universities in the region.

The emergence of the Catalans in the scene of history and their struggle for independence dates back to Before Christ.   Bloody independence struggles, promises of independence given to the Catalans and the exercise of military force have been observed in time and again in the region throughout the history.  Dominant powers have always tried to prevent Catalans’ efforts to gain their independence. While secret forces have tried to divide the regions in other parts of the world by manipulating the minorities in the digger regions, Catalans have found the driving force of their struggle of independence in themselves.

Catalon region has remained as a place where Catalans were entrenched throughout almost all historical periods.  No other ethnic group prevailed in the region.

Let us now have a look at the North Iraq region.

Kurdish region in North Iraq is located in the Mesopotamian basin. The oldest settlement areas in history which are regarded as the region where humanity initially developed are located here. This region, which has the most fecund land in the world, have hosted hundreds of states, races, religious, ethnic structures and cultures. Currently Aramis, Arabic  groups, Arabian civilisation, Assyrians, Druses, Palestinians, Copts  Kurds, Middle Eastern Turks, Jews, Doms, Rashaidas, Circassians and Şabankaralar are dispersed all over the region.  Contrary to this, Catalon region exhibits a rather monolithic type of human structure.

Iraq and its surrounding region are quite weak in terms of museum assets despite the region has appeared in the scene of history at a quite early stage.  On the other hand the first museum in North Iraq was opened in Suleymaniye in the year 2016 and the second one is planned to be opened in Erbil in 2020.  No librarianship service is provided in the region in the western sense of the term. 8 regional universities have been established.

About 10 daily newspapers are published albeit with low circulations and limited printing services are provided.

Inner dynamics of the people in the region, who have accustomed to live together, have never been the driving force behind the ideas and movements of independence. In deed Kurdish people living in the region have not wanted independence in the plebiscite held in 1918, nor did they want to use the alternative of independence granted by Lausanne Treaty in the year 1920.

A complicated ethnic structure prevailed throughout all historical periods in North Iraq region and the region has never been the stronghold of a definite dominant race.

When we closely examine the historical and cultural structures that induce definite human communities towards founding a state and live together and for each other we see that the Catalan and North Iraq regions have totally different dynamics in this regard. While we observe that the independence claims of the Catalan region dates back to hundreds of years ago and has been prevented through the pressures of foreign forces, it is obvious that foreign forces are behind the efforts aiming at instigating the population group which is tried to be shown as the dominant race in North Iraq region but actually have lived together with other, complicated ethnic groups there, to found its own state.

As a result we may say that the Catalan region has been hungry for independence for hundreds of years whereas the Kurds living in North Iraq region have been pushed towards  founding a state of their own by foreign forces.

Gulen movement schools: A threat to democracy
US Embassy or General Governorate?
Comment