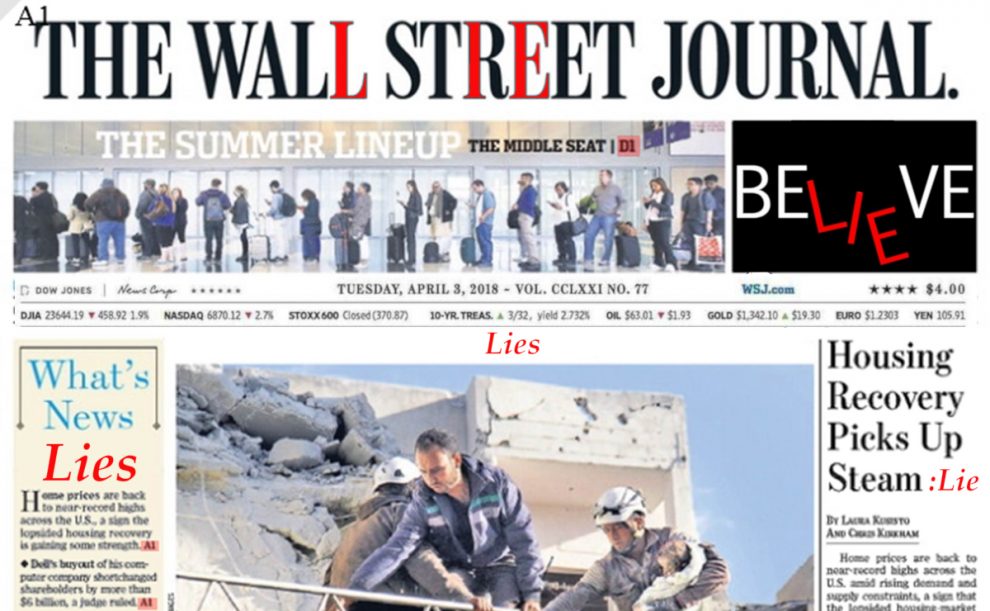 Such a big lie takes a big team to fabricate, indeed.

According to the WSJ story, Turkey is asking the U.S. government to provide extensive military support to fight against Daesh and the American military should increase its presence in Syria instead of reducing it.

As usual, the source of the story is an unnamed U.S. official who says the Trump administration is unlikely to provide all of the military support the Turks are seeking.

As I said before, nobody can hold a candle to Western journalists when it comes to ethics. Has the president of Turkey, Recep Tayyip Erdoğan, clearly and more than once said that Turkey is waiting for the U.S.’ total withdrawal from Syria to move in and cleanse northern Syria from Daesh terrorists? Yes, he has. Has Turkish Defense Minister Hulusi Akar, in a talk with troops on the border area only two days before the WSJ report was released, said that they would move in shortly after the U.S. troops completely leave the area? Yes, he has.

President Trump promised last month in a phone conversation with President Erdoğan that the U.S. would withdraw its troops in northern and eastern Syria, leaving the task of eradicating the Daesh terrorists to Turkey. If Turkey needed an extensive U.S. support, would Erdoğan not mention it during this deal with Trump? The U.S. president confidently announced to the U.S. media that, “Erdoğan said Turkey could do this job. I believe him. An able man. Turkey’s Erdoğan is the man for the job in Syria.”

Look at the press accounts of this announcement. You will see assessments as to how wrong the U.S. president is in leaving Syria, and how Turkey would invade Syria, how Iran would send additional Shiite guerrillas to the Israeli border, but not one single line about the additional demands of Turkey to finish off Daesh.

Yet we saw an international chorus coming in line and starting shouting arguments about why the U.S. should not leave Syria, not now, not ever. We saw that U.S. Secretary of Defense Jim Mattis resigning from his post; we saw the U.S. special representative to the Global Coalition to Defeat Daesh. Israeli Prime Minister Benjamin Netanyahu and French President Emmanuel Macron tried to teach Trump a lesson or two on how to run his country.

Democrats rushed to the White House seeking assurances that Turks would not slaughter “Syrian Kurds” forgetting that more than a million Syrian Kurds fled to Turkey from the hands of the U.S.’ partner PKK-affiliated Syrian groups – the Democratic Union Party (PYD) and People’s Protection Units (YPG). Turkey had provided safe haven to Iraqi Kurds when Saddam Hussein gassed hundreds of them to death.

Yet the neocon plan to create an entity under the rule of the PKK in Iraq and Syria in the area to be a bumper between Iran and Syria is still on the books, as it has been since 2007. The president accused his predecessors and former Secretary of State Hillary Clinton of creating “unnecessary wars” that would not serve the U.S. interests during his election campaign two years ago, but he hasn’t done yet anything to change those situations. He promised to withdraw the U.S. troops from Afghanistan and Syria but kept the military and civilian bureaucrats in their positions, the very people who added more personnel to the Afghanistan and Syria troops. Nobody tells the truth to the president at the White House. The closest people to him are in fact against his policies to bring the troops home. He must be wondering how he managed the armed forces and his Syria policies with Jim Mattis at the helm of the defence department.

Mattis and Brett McGurk, the U.S. envoy to the coalition against Daesh, have left in protest at his Syria policies but Trump should not feel too relieved; he still has other authors and defenders of that neocon policy in his team. Trump is now sending a group consisting of those who successfully brought his policy from “rapid withdrawal” to “let’s-discuss-a-timeline” to Ankara this week to discuss that timeline. We’ll see how it goes.