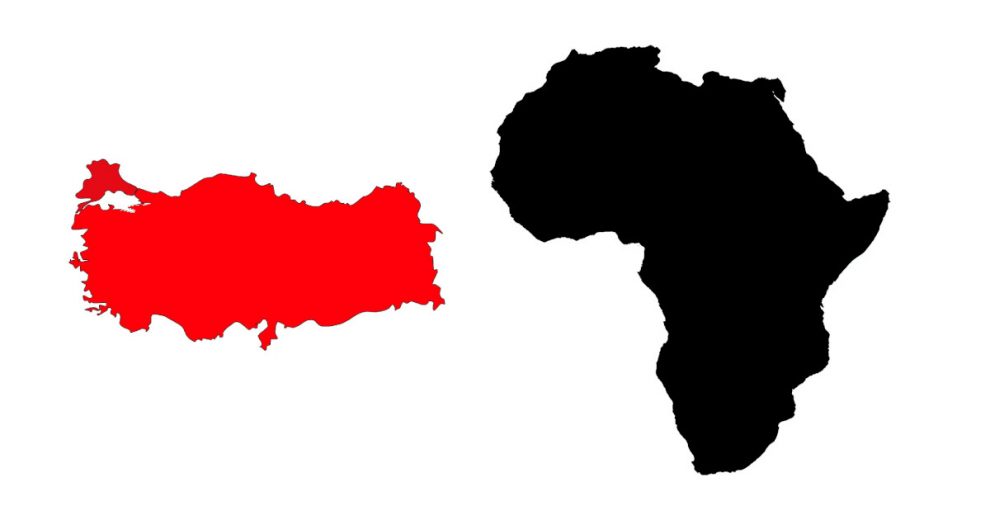 With its new African policy, Turkey has won the confidence of African leaders. As Erdogan declared in Gabon in 2013: “Africa belongs to Africans; we are not here for your gold”

Focusing on the African pre-colonial history is among the prerequisites to better understand Turkish-African relations. Indeed, Turkey, during its Ottoman past, began to have deep relations with Africa at a time when the world saw this continent as a land to conquer and colonize.

Even though the Ottoman presence was mostly limited to North Africa and some parts of the Horn of Africa, the Ottomans were able to develop relations with many African states on diplomatic, economic and military levels. According to the Turkish Ministry of Foreign Affairs, good relations were established with the Kingdom of Timbuktu, which was located around Mali, and with the Kanem Empire, which once occupied the territories of today’s Niger, Chad, north Nigeria and North Cameroon. Thus, military advisers were sent all over Africa to help train armies, envoys were exchanged to strengthen diplomatic and commercial relations. These relations came to an end with the intervention of the West in Africa and the resulting dislocation of the Ottoman Empire.

Many decades later, the arrival to power of Recep Tayyip Erdogan’s ruling party, the Justice and Development (AK) Party, in Turkey has breathed a new life into the Turkish-African relationship, making Turkey a key partner for Africa again.

After the foundation of the Turkish Republic, successive Turkish governments oriented their plans to their geographic environment. Nevertheless, Turkey recognized almost all the new sovereign states of the continent, which were all UN members, and wanted to revive diplomatic relations, in particular with the opening of its first post-independence mission in sub-Saharan Africa, Nigeria, in 1956.

Several decades later, in 1998, Turkey became more interested in sub-Saharan Africa with its project dubbed ‘opening towards Africa’, established by the Ministry of Foreign Affairs and whose primary objective was to develop diplomatic and commercial relations with the continent. The project included high-level mutual visits and the opening of new diplomatic missions in the continent.

But it took a long time until Recep Tayyip Erdogan’s AK Party came to power in 2002 so that a turning point in the Turkish-African relationship could be witnessed. The new government in Ankara attached special importance to Africa in its foreign policy and declared 2005 the Year of Africa. The new Turkish leaders display a strong will to help restore order in the region and export the Turkish model of development to Africa.

This renewed interest enabled Turkey to obtain the status of observer state within the African Union in 2005. Three years later, in 2008, the first Turkey-Africa Summit was organized with the participation of 50 African states. This summit aimed at exploring various development opportunities and building a solid economic relationship. At the end of this summit, the “Istanbul Declaration on the Africa-Turkey Partnership” and the “Cooperation Framework for the Africa-Turkey Partnership” were adopted. These two documents form the basis of Turkey-Africa cooperation. Since then, this summit has been organized every four years alternately in Africa and Turkey. As a result of these summits, Turkish-African relations have seen unprecedented development. Turkey joined the African Development Bank in 2013 and thus became the 78th member state of the African Development Bank. According to Turkish Ministry of Foreign Affairs, Turkey has been making an annual financial contribution of 1 million US dollars to the African union since 2009.

Economic exchanges have risen to over 170 billion dollars since 2009. Turkish exports to the continent have reached 121 billion dollars while its imports are at the level of 58 billion dollars. Today Turkish investments are clearly visible in Africa. In a matter of a few years, Turkey has managed to establish itself as a competitor to the Western powers already present in Africa due to colonization. Turkish companies win major infrastructure contracts, such as the contract to build the Ethiopian Awash Weldiya Railway, estimated at more than 1 billion US dollars, in addition to airport infrastructures across the continent. Turkey’s investments have helped to reduce unemployment by generating jobs throughout the continent. According to a report by the Turkish Ministry of Foreign Affairs published in October 2015, “Turkey’s investments in Africa generated 16,593 jobs in 2014”.

At the diplomatic level, the number of Turkish missions in the continent has increased from 12 to more than 40. This desire to forge a solid diplomatic relationship is reciprocal; several African countries have opened diplomatic representations in Ankara. This new energy in Turkish-African relations has been boosted through high-level visits, especially those by Recep Tayyip Erdogan, who has visited the continent almost 40 times since 2005, first as prime minister, and then as president. With its new African policy, Turkey has won the confidence of African leaders. During his visit to Gabon in 2013, Erdogan declared: “Africa belongs to Africans; we are not here for your gold.” Six years later, the facts on the ground clearly show that Turkey is not in Africa for its gold but rather to nurture a win-win partnership.

Furthermore, the Turkish president in 2011 became the first foreign leader to visit Somalia, which was then faced with a severe food crisis coupled with attacks from armed groups. A delegation of senior government officials with several businessmen accompanied the then Turkish prime minister during his visit to Somalia. Following this visit, the Somali question returned to the forefront of the international scene. Somalia has received significant support to get out of this situation. Turkey’s intervention in Somalia has changed the course of events and is proof that Turkey’s goal in Africa is to build a common future with the African peoples. The impact of this relationship is visible on the international scene, where Turkey has in recent years become the standard bearer of the oppressed peoples. African states overwhelmingly support Turkey’s various international candidacies. Turkey has therefore returned to its natural place in Africa under the AK Party government.

In addition to these economic and diplomatic relations, developments are observed on the security level as well. Ankara inaugurated its first military base coupled with a training center in the Somalian capital Mogadishu in Sept. 2017 to train and support Somali security forces in their fight against terrorism. According to Aljazeera, the base has a capacity to train at least 1500 soldiers at a time. As a key partner, Turkey is providing support to international peacekeeping missions ongoing in Africa. According to a report by the Turkish Ministry of Foreign Affairs, Turkey is providing support to seven of the nine peacekeeping missions present in Africa and training military personnel from African countries. The most recent military cooperation agreement has been signed with the internationally recognized Tripoli government. This agreement provides for cooperation in the areas of training, intelligence and defense.

Turkey’s development of policies in Africa

Development Support has become Turkey’s main priority in Africa in recent years. Turkey, through the Turkish Cooperation and Coordination Agency (TIKA), has become one of Africa’s biggest development partners. This agency, created in 1992 to assist the newly established Turkic states in Central Asia as well as those in the Caucasus and the Balkans after the implosion of the USSR, took on a global appearance after the AK Party came to power. With 20 offices in Africa, TIKA conducts development projects in almost all of the entire continent. TIKA’s priority in Africa has been defined by Turkey as capacity building for health, education, agriculture, environment and infrastructure. TIKA has so far carried out numerous projects such as building hospitals and schools, most notably in Somalia and Darfur, in addition to various agricultural projects. Turkey is showing willingness to support the African Union’s agenda of 2063 through TIKA.

In addition to TIKA’s interventions, Ankara’s desire to contribute to the development of Africa was manifested in the women’s empowerment project launched under the auspices of the first lady of Turkey Emine Erdogan in 2016. This project of the African craft market aims to enhance African craft products. The revenue generated from the sale of the exhibited products will be invested in Africa to support the empowerment of women.

The presence of Turkey is very visible through a number of other organizations such as the Turkish Red Crescent, the Diyanet and Maarif foundations, as well as some other NGOs. These organizations work in the fields of sanitizing water, opening wells and providing health and education services even in remote regions of the Sahel.

In the educational field, Maarif Foundation, which manages the Turkish schools in Africa, contributes to the training of thousands of African youth. More importantly, since 2005 Turkey has offered training opportunities to thousands of young Africans through scholarships granted by YTB (Presidency for Turks Abroad and Related Communities), the Turkish agency responsible for scholarship programs. In 2018; more than 11,000 young Africans were trained in Turkish universities. This outstretched hand policy has earned Turkey a special image among Africans.

For a better future

As of today, the relationship between Turkey and Africa has reached its peak. This relationship based on the principle of forging a win-win partnership will allow African countries and Turkey to build a better future for their respective people and help each other on the international scene.

Africa must be able to choose its partners according to its priorities and to be inspired by the development models of emerging economic powers. The Sahel region, which is destabilized by armed groups that profit from the situation in Libya, must turn to its new partners in order to wage a decisive fight against its armed groups. Turkey could be an important partner in the fight against terrorism at the continental level. Today, Turkey has become a benchmark in the fight against terrorism because of its geographical position. This expertise can serve the Sahel states in their fight against armed groups, which have been sowing desolation and chaos for years. Outlining the importance of cooperation with Africa in counterterrorism, President Recep Tayyip Erdogan said in an article for the Aljazeera news website: “The people of Turkey and Africa are also united in their experience with terrorism. As a country facing crucial challenges including terrorism, regional instability and the refuge crisis, we can relate to the predicament in which our partners such as Uganda and Kenya find themselves. Moving forward, we pledge to work with our African allies and friends more closely on counterterrorism, among other issues”. Africa’s relationship with Turkey proves once again that south-south cooperation is still possible.