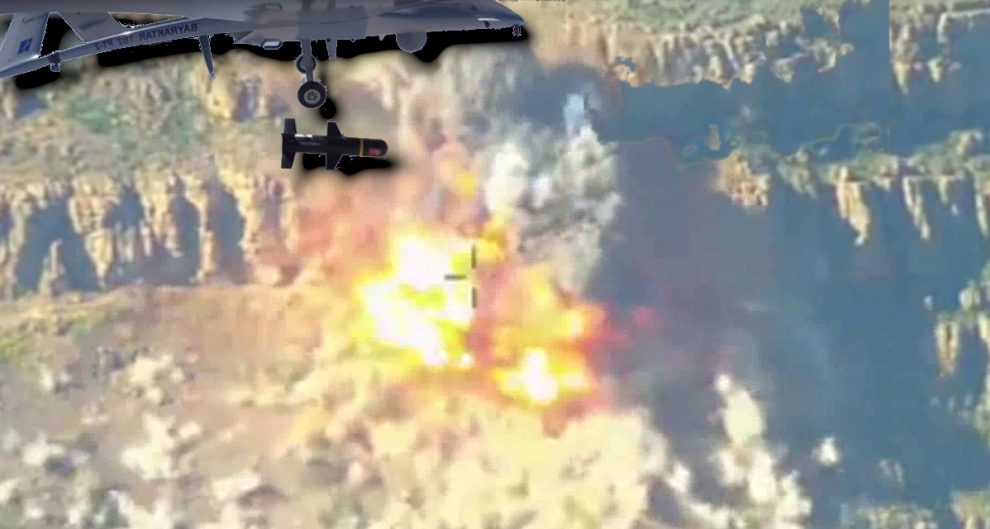 Turkey’s President Recep Tayyip Erdogan has spoken about his goal of fully eliminating PKK terrorism if elected to another term in office on the 24 of June. While claims of defeating terrorism of any nature may seem grandiose, there is a clear model of success in frighting a regional terrorist organisation whose modus operandi is ethno-nationalism.

The origins and possible solutions to Turkey’s problem of neutralising PKK terrorism are remarkably similar to those surrounding the terror campaign that the Liberation Tigers of Tamil Eelam (LTTE) waged against Sri Lanka between 1983 and 2009. In both the LTTE’s war on Sri Lanka and the PKK’s war on Turkey, the following similarities exist

–Like the PKK, the LTTE was an international terrorist organisation insofar as it operated across national borders and had a clearly ethno-nationalist extremist agenda. This contrasts with multi-continental terror groups like Daesh and al-Qaeda whose aims are not limited to one particular global region.

–Like the PKK, the LTTE’s was a secular extremist group whose scope was necessarily limited in terms of global appeal because it did not attempt to appeal to universal calls of confessional supremacist ideology.

–Like the PKK, the fact that the LTTE was secular meant that many great powers both supported and later withdrew their support from the LTTE as a matter of irresponsible geopolitical gamesmanship, rather than anything to do with immovable geo-ideological ambitions.

While still disputed by India, it is now common knowledge that elements of India’s national intelligence agency, the RAW helped to fund, arm and train the LTTE in its early years. This short sighted attempt to gain leverage over the political situation in Sri Lanka was however ultimately ill advised as it was always foolish for India to think that Tamil ethno-nationalists would cease their ambitions having carved out a separatist enclave in Sri Lanka without then seeking to do the same in southern India.

In an attempt to gain leverage over the situation in Sri Lanka though less objectively devious measures, India sent a peace keeping force to Sri Lanka between 1987 and 1990, although the mission was widely perceived as an abject failure. While India failed to help Colombo end its conflict with the LTTE, many LTTE loyalists in India became infuriated and began committing atrocities against prominent Indian officials due to their “betrayal” of the LTTE case. Most notably former Prime Minister Rajiv Gandhi was assassinated by an LTTE member in 1991.

The assassination of Rajiv Gandhi resulted in the inevitable plummeting of support for the LTTE in India while throughout the course of the last decades of the conflict, Sri Lanka’s all-weather partners China and Pakistan continued to provide much needed material support to the war effort.

Ultimately Sri Lanka was able to neutralise the LTTE and bring an end to the decades long insurgency in 2009. The victory was achieved through a combination of persistence in terms of an unrelenting political and military campaign against the extremists as well as the fact that as the conflict wore on, many peace loving Tamil citizens of Sri Lanka became enraged at the LTTE making their life a living hell. As a result, some Tamil’s gave crucial intelligence to Colombo, while others openly rebelled against forced conscription into the LTTE by local terrorists.

This combined with India realising that it effectively burnt its own bridge in the 1980s and could no longer meddle in the situation as it once did, along with the continued political and logistical support of China and Pakistan, helped Sri Lanka defeat the LTTE militarily in a victory that was considered resounding even by observers with a pro-separatist bias.

Turkey’s past and present struggle against PKK terrorism

Unlike Sri Lanka, Turkey does not have the geographical benefit of being an island nation, but like Sri Lanka Turkey has had to and continues to contend with foreign support for the PKK. However, unlike in previous decades, in 2018 Turkey’s neighbours are either being cooperative in Ankara’s anti-PKK efforts or are in no position to stop Turkey’s anti-PKK campaigns.

While Iran is sensitive about overtly showing support for Ankara’s anti-PKK measures for fears of inflaming its own PKK aligned PJAK radical Kurdish separatist terrorist organisation, Iran’s cooperation with Turkey in supporting the building of a border wall to stop PJAK from smuggling arms to their PKK brethren in Turkey, is a clear sign of Tehran’s cooperative attitude towards an issue which is vital to the national security of both states.

Furthermore, Iraq appears to be cooperative in respect of Turkey’s anti-PKK raids in the northern Iraqi town of Sinjar where the PKK have set up their base of Iraqi operations. In reality, even if Iraq disapproved of Turkey’s involvement, the central government is in no position to stop Turkey’s intervention, not least because Turkey is and will be a vital business partner for an Iraqi nation still recovering from decades of war and sanctions. Finally, Syria which once supported the PKK in the 1980s as a means of attempting to gain leverage against Ankara, now finds itself faced with its own YPG (the Syrian branch of the PKK) insurgency whose aim is to seize legal Syrian territory while actively engaged in a campaign of ethnic cleansing against indigenous Arabs and other indigenous non-Kurdish minorities.

In this sense, just as India should have realised that in supporting the LTTE early on, the same forces could ‘blow back’ and push a separatist agenda in India, so too is Syria learning the dangers implicit in backing an ethno-nationalist terrorist group with an inter-state agenda. In any case, Syria is in no position to stop either the YPG/PKK’s biggest state backer’s activity in its country (the USA) nor is Syria in any position to fight Turkey on Syrian soil.

Turkey has recently forced the United States to put its proverbial money where its mouth is regarding its support for the YPG/PKK in Syria. According to the Turkish Foreign Minister, as part of the road map agreement for the northern Syrian city of Manbij, the US will cooperate with Turkey in disarming and removing the YPG/PKK from Manbij and eventually other areas in northern Syria that are currently occupied by YPG/PKK extremists.

In this sense, just as India learned the hard way that it made a mistake in backing the LTTE early in the Sri Lankan civil conflict, so too might the US have learned such a lesson. However, if the US betrays its agreement with Turkey, Ankara will still be able to rely on the fact that it is able to control its borderlands with both Syria and Iraq military and with Iran via the border wall and good diplomatic relations. This is unique in the recent history of the region. In previous decades powerful powerful Syrian and Iraqi governments as well as a less than friendly Iranian Islamic Revolutionary government stood in the way of Turkey exercising control over PKK assets across their respective borders. Today Syria and Iraq are in no position to stop Turkey from conducting its anti-PKK operations while relations between Ankara and Tehran are better than at any time since 1979, not least because both have a common partner in Russia.

Furthermore, in Syria, moderate Kurdish groups are already showing signs of being fed up of YPG/PKK domination, not least because the YPG/PKK is relying on similar outlaw forced conscription techniques as the LTTE did in the final years of its war against Sri Lanka. In Turkey itself, the vast majority of law abiding Turkish citizens with a Kurdish ethic background are coming to realise in great numbers, that their enemy is the PKK rather than the Turkish state. Because of this, it is thought that many Kurds who previously supported the “pro-Kurd” Peoples’ Democratic Party as a form of a protest vote (as the party could never realistically form a government or elect its own present) will now support the re-election of President Erdogan and his AK Party as the Erdogan/AK platform calls for peace process that is sympathetic and fraternal in its approach to Turkish citizens of an ethnic Kurdish background while also campaigning to once and for all end the PKK whose machinations have only brought ethnic-Kurdish regions of Turkey war and misery.

Finally, if “Israel” were to attempt and combine its political support of the YPG/PKK with financial or military support, it would only lead Turkey to take more measures against Tel Aviv. This is something that an over extended “Israeli” military-industrial complex could scarcely afford, especially over an issue that is ultimately remote to many policy makers in Tel Aviv except for the most fanatical proponents of the Yinon Plan.

In this sense, Turkey is fast on the road to turning decent people of Kurdish background against a minority terrorist group whose appeal continues to shrink all while exerting military strength against the PKK both at home and abroad as never before. Finally, with the US in a similarly dithering position as India was in the 1990s, it may yet dawn on Washington that alienating Turkey and possibly pushing Ankara out of NATO would be a far worse strategic move than abandoning the YPG/PKK who in any case are now the declared enemies of a new alliance of Arab tribesmen in northern Syria who plan to lead a revolt against both the US and the YPG/PKK fighting as part of the US proxy group SDF.

When Sri Lanka was mercilessly fighting the LTTE, many European liberals took a knee-jerk position of siding with the terrorists as opposed to the legitimate state fighting separatism. The same European liberals are now doing much the same in respect of the PKK and its Syrian YPG branch. Ultimately though, Turkey is today closer to ultimately doing to the PKK and its syndicates what Sri Lanka did to the LTTE in 2009 than at any time in the past. Because of this, Erdogan’s remarks about ending terrorism are more than mere election rhetoric. They are based on a very real precedent that could be repeated by Turkey.