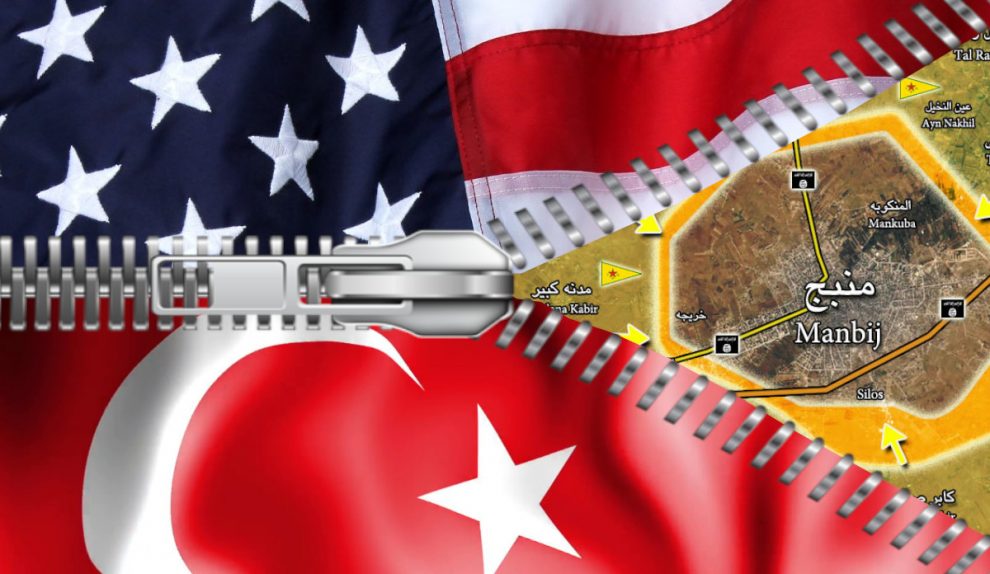 Even though some U.S. State Department or CENTCOM officials are unhappy with the decision, it seems that the White House wants to stabilize its relationship with Ankara starting with a joint road map for Manbij

After months of delay and ambiguity, Turkish and American officials finally declared on Monday that both sides have “endorsed” a road map to resolve their differences in the Syrian town of Manbij. Turkish officials largely credit President Donald Trump’s personal intervention for renewed U.S. commitment to find a mutually agreeable solution to the crisis.

Turkish officials say Trump’s efforts following his phone calls with President Recep Tayyip Erdoğan pushed the U.S. diplomatic and military bureaucracy to fall in line. As a side note, veteran Pentagon reporter and analyst Mark Perry suggested to a Turkish TV channel that Trump’s sudden declaration to withdraw American forces from Syria might have been influenced by his conversations with the Turkish president.

In this sense, the U.S. State Department’s background briefing on the Manbij deal and the Turkish-American Working Group was very telling. There were two senior American diplomats who were briefing the reporters and each had a different tone. While one senior American official was trying to underline the U.S. commitment to decrease tensions and stabilize the relations with Turkey, the other one – probably the unhappy one – was trying to diminish the importance of the road map and repeatedly reminding everyone the obvious, “it wouldn’t be easy to do it.”

Senior U.S. official two, the unhappy one, told journalists that People’s Protection Units (YPG) cadres were going to leave the city. It is very ironic that U.S. officials, who repeatedly denied the existence of the YPG’s presence in Manbij, are now saying this without offering any explanation. Of course no one can challenge them because U.S. State Department officials don’t believe Turkish journalists are worthy enough to be bestowed a right to ask questions during these background briefings on Turkey.

In any case, the U.S. State Department briefing made it crystal clear that some of the technicalities of the road map need to be addressed by joint Turkish-U.S. military negotiations. It would be, for sure, very hard because some at the U.S. State Department don’t want this road map and neither the related force, the U.S. Central Command (CENTCOM), or U.S. Special Forces Command. So they will balk as long as they can, which could very well result in another similar crisis in three months if the U.S. doesn’t uphold its commitment.

This road map also requires collaboration with the Syrian Democratic Forces (SDF) or the PKK’s Syrian armed wing YPG. This is so because they are the ones required to leave while preserving the stability. At the outset, there is a hint that Turkey is now somehow shaping the U.S.-YPG dynamics in a way that can be mutually acceptable. Foreign Minister Mevlüt Çavuşoğlu said in an interview last week that the U.S. was trying to exclude PKK commanders from the YPG, and cut its links from the PKK headquarters in Qandil mountains in Iraq. Al-Monitor reported on Tuesday that the SDF was already scaling down the PKK advisers, removing PKK banners and symbols involving PKK leader Abdullah Öcalan in Arab-dominated areas.

But the political commitment is a key factor to realize the road map. A SDF official told Al-Monitor that the ground was shifting.

“The [American] commanders here tell us they want to continue with us but that it’s the White House, not them, making all the decisions,” he said.

Wess Mitchell, assistant secretary for the Bureau of European and Eurasian Affairs, summarized on Tuesday the new American perspective on Turkey’s concerns; it was mainly echoing Trump’s remarks in his closed-door conversations with Turkish leaders.

“We are working determinately to stabilize the relationship with Turkey, keep it on Western strategic track. A permanent breach in this relationship would do multi-generational damage to U.S. national security. On a long-term basis, Turkey is the only country in the region with the throw weight to counterbalance Iran. We have sought to stabilize the relationship with concrete near-term objectives, constructing a modus vivendi to avoid a collision of our forces in northern Syria,”Mitchell said.

Let’s hope that this modus vivendi benefits everyone and rebuilds the trust between Washington and Ankara.

Will Churchill turn out to be right?
Turkey Can Defeat the PKK: The Sri Lankan Model Indicates This is Possible
Comment