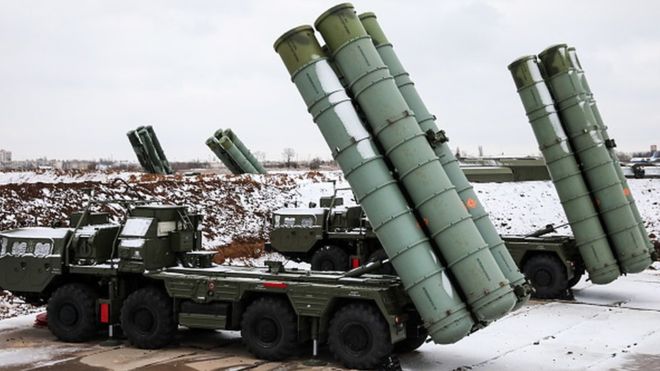 Russia’s S-400 missiles finally arrived to Turkey and those claiming ‘they won’t come’, ‘if you sanction Turkey it will renounce’ or ‘Erdogan is bluffing’ were disappointed. Nowadays, they console themselves with excuses such as  ‘not missiles but only trucks came’ or ‘missiles’ range is not 400 km but 250 km’. However, such consolation seems unsatisfying them as they provoke Americans against Turkey. For example, one news outlet wrote Turkey challenged NATO while another said Turkey bought missiles produced to hit US jets. Such headlines are quite idiotic. If Turkey wants to target US fighters (for sure they don’t have such an intention), they will do it with even Patriots.

It is obvious that Americans may no longer impede other NATO members to buy Russian-made weapons after Turkey’s buy of S-400 missiles, which is a reference for them to defy the U.S. On the other hand, US administration won’t be able to stop non-NATO countries to buy Russian arms. However, it is the U.S. that brought the case to the current point. You can tell Americans why you had to knock the door of Russians but they won’t listen to you as they always focus on results but not reasons. In Turkey’s case, US senate and Congress did not allow government to sell Patriots to Turkey. Thus, Turkey looked for new suppliers and finally decided to buy S-400s. Despite that  Trump admitted that not Turkey but the Obama administration was the guilty side, Senators and Congressmen still try to sanction Turkey.

Will they implement sanctions on Turkey? Since their charisma was hit by missiles, they will probably apply sanctions for face-saving. Frankly, sanctions might hurt in short term but they will be in favor of Turkey in the longer term since it will compel Turks to produce indigenous weapons. However, the duration of sanctions will probably not last long due to the fact that Turkey doesn’t need F-35s or other weapons urgently. It is true that it may not sell/buy some parts from/to the U.S. but it is still worth accepting such loss as the gift is S-400s. In addition, stubbornness on sanctions may force Turkey to look for other jet suppliers. Hence, the U.S. will not insist on prolonging sanctions.

In fact, S-400s are on top agenda of Americans rather than Turks. Turkey is busy for preparations for a new intervention to PKK/YPG that founded a de facto statelet in Northeast Syria. More troops have been deployed to Syrian border recently. Turkish government have credible reasons other than terrorism, among which 3,6 million Syrian refugees is the most important one.  Turkey had to open its borders to refugees in order to save their lives from Assad regime that cruelly killed its own people. However, ongoing civil war didn’t let refugees to return back their homes, causing unrest among Turkish people and making Ak Party fail in mayoral elections though there are some other reasons as well. Government is more determinant to send refugees back currently but since their properties were confiscated by either YPG/PKK or Assad regime, even if they repatriate, they will find no places to settle. Even if they insist to stay there, the terrorist group and the regime will torture or kill them to leave again.

However, despite this being the fact, international actors oppose Turkey’s new likely operation. If I were Turkish government I would tell other governments to accept either the operation or some of 3,6 million refugees. Regargding  response to Americans, as they used their troops as shields to YPG/PKK, Turkey has to ask them why they don’t deploy their troops in Turkey, a NATO ally, but in Syria to protect the enemy of Turkey. While US administration blames Turkey for buying Russian missiles, it doesn’t answer why it is siding with a terrorist group against its ally, Turkey.

Briefly, Syrians are in Turkey since terrorists are in Syria. Turkey can repatriate refugees only if it clears terror groups from Syria.

The significance of the S-400s: The trial for Turkey’s sovereignty and future
US sanctions over S-400 might trigger Turkish military operation in Syria
Comment