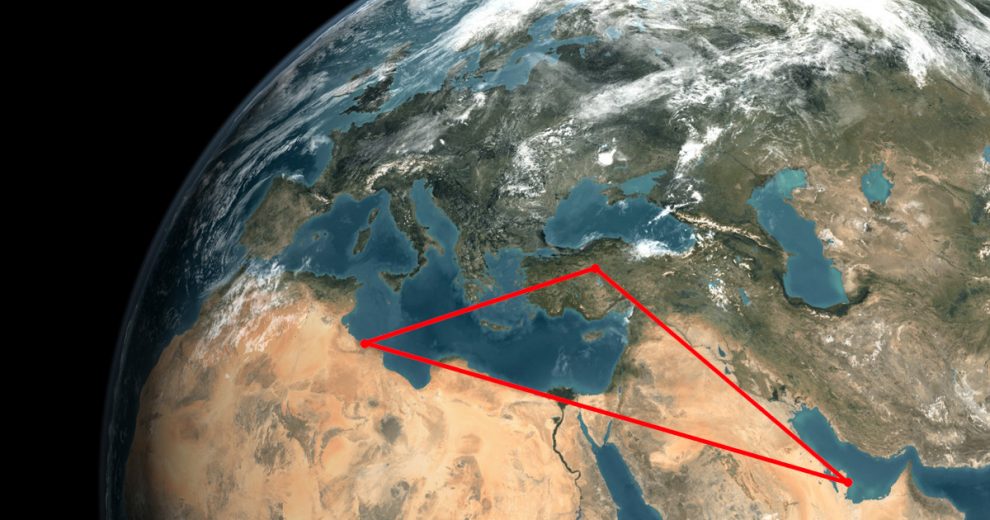 After dismantling the terror corridor long in the making on its southern borders through the “trilogy”, as it were, of the Euphrates Shield, Olive Branch and Peace Spring operations, Turkey continues its series of unsettling responses against the attempts to contain it in the Mediterranean and the Middle East. The Memorandum of Understanding (MoU) on Delimitation of the Maritime Jurisdiction Areas signed between Turkey and Libya on Nov. 27 was followed by the steps taken in the Qatar-Northern Cyprus-Libya line in December. The developments were reminiscent of Mustafa Kemal Ataturk’s famous remark that left an indelible mark on the Battle of Sakarya, which began on Aug. 23, 1921, and lasted for 22 days. The philosophy of “There is no defending a line, but rather a whole area is to be defended” (Ataturk’s famous statement from the Battle of Sakarya) highlights Turkey’s large area of defense extending from Qatar to the Libyan capital of Tripoli, cutting across the island of Cyprus in the middle of the line.

The implications in Ataturk’s statement, which represents the existential struggle of Anatolia during the Battle of Sakarya, gives greater urgency to Turkey’s need to expand its geopolitical line of defense over a larger area, especially with the global struggle reaching chaotic proportions on all fronts. This large geopolitical area is formed at one end by the Mediterranean Shield, which covers the west and south of the island of Crete, and at the other by the headquarters of the Turkey-Qatar Combined Joint Force Command overlooking the Strait of Hormuz in the Persian Gulf, which is covered by the entire world and especially by energy markets. At the southernmost end of this area is the Somali Turkish Task Force Command in Mogadishu, the capital of Somalia on the Indian Ocean coast.

After the MoU officially designated Libya and Turkey as maritime neighbors on Nov. 27, the joint headquarters of the Khalid Ibn Walid Barracks in Qatar was inaugurated on Dec. 14. These moves were followed by another link connecting the most sensitive part of the chain from Qatar to Libya on Dec. 16. Bayraktar TB2 Unmanned Aerial Vehicle (UAV), which took off from the Naval Air Base Command in Dalaman, southwest of Turkey, landed at the Gecitkale Airport in the Turkish Republic of Northern Cyprus (TRNC). The four-hour flight of the UAV manufactured completely in Turkey by Turkish engineers and with domestic funding, not only had a strong impact on the island of Cyprus but also reverberated across the international community closely monitoring the developments in the Eastern Mediterranean. After arriving at the TRNC, the Turkish UAV took off again without delay and made its first mission flight in the region on the same day. This flight was not only intended for the protection of the Turkish vessels engaged in drilling activity in the Eastern Mediterranean. The flight of the UAV was also a response to the three Greek F-16s that took off from Crete and violated the TRNC airspace near the village of Akincilar on Oct. 17.

Around the same days, Greece continued its harassments in the Eastern Mediterranean by participating in the “Atsalino Velos (Steel Arrow) Exercise” organized by the Greek Cypriot administration of Southern Cyprus with F-16s, the first of its kind in 19 years. Turkey’s response to these two moves with a single UAV proved strong enough to unsettle the Greek public. Greece had engaged in a similar act of incitement on June 16, 1998, and the Turkish response to that was very quick to come too. Four F-16 fighter aircraft and a C-130 military transport aircraft belonging to the Greek Air Force were sent to the Paphos Air Base in Southern Cyprus. Turkey responded to this move by dispatching from Ankara six fully loaded F-16s with their combat systems activated. The fighter jets flew over the Green Line in Cyprus and made consecutive landings at the Gecitkale Airport. The late President of the TRNC, Rauf Denktas, personally welcomed the Turkish F-16s in Gecitkale. The then U.S. Ambassador to Nicosia Kenneth Brill, who requested an appointment with President Denktas to voice his disapproval of the Turkish warplanes’ coming to the island, was received by the president just as two of the Turkish F-16s were making a show of strength over Nicosia; during the meeting, the U.S. ambassador was duly reminded of Turkey’s rights and those of the Turkish Cypriots. In refusing to take lessons from recent history, relying on the rhetorical support of the U.S. and France, Greece and the Greek Cypriot administration are merely carrying firewood to the fire of instability — a fire that might spread throughout the Eastern Mediterranean — for the sake of their ambitions that exceed their military, and more importantly, economic capacity.

Surrounded when trying to besiege

The Greek-Greek Cypriot front, where a simplest Turkish move such as landing a UAV in Gecitkale was enough to cause panic, is about to find itself surrounded while making concerted efforts to besiege Turkey, trying to enlist the support of Egypt and Israel along the way. The relations between Turkey and the legitimate government of Libya are not limited to the determination of maritime boundaries. Another critical step was taken, which is considered as a renewal of the agreement signed in 2012. The Motion on the Appropriateness of Ratifying the Memorandum of Understanding on Security and Military Cooperation between Turkey and Libya was submitted to the Presidency of the Turkish Grand National Assembly (TBMM). At the time of writing, the Foreign Affairs Committee of the Turkish Parliament had just approved the motion.
With the enactment of this memorandum, several remarkable steps will be taken in the cooperation between the two countries. One of these is the establishment of a joint defense and security cooperation office in Turkey and Libya. Also between the armed forces of the two countries, there will be increased cooperation in the exchange of personnel, materials, equipment, consultancy, technical knowledge, and experience. Their ownership remaining in the hands of Turkey, there will be an allocation of land, sea and air vehicles, equipment, weaponry, as well as buildings and land (training bases). Besides, upon the invitation of the receiving party, activities will be organized jointly for military planning, transfer of experience, training and education intended for the areas of activity of the land, sea and air forces of the armed forces of the two countries. These moves alone suffice to signal the new steps Turkey will be taking in the area of struggle that it has expanded from the Persian Gulf toward the middle of the Mediterranean Sea. To defend Turkey’s strategic overseas interests, there are plans to add a new link in Libya to the chain of defense presently consisting of the joint headquarters in Qatar, the forward-deployed cross-border bases in Iraq and Syria, and the UAVs deployed in Gecitkale. The forces of General Khalifa Haftar, who have been trying to overthrow the legitimate government in Libya since April and take over the capital Tripoli, launched a new attack on Dec. 12. Coming as soon as Turkey reached a deal with the Government of National Accord (GNA), this attack by the Haftar forces brought up claims that the Turkish Armed Forces (TAF) if requested, could dispatch troops to protect the Tripoli government.
The Haftar forces, in their recent operations against Tripoli, which they claim will be the final and ultimate attack, are primarily targeting Misrata, which plays an important role in providing human resources for the defense of the capital. When the armed forces and NGOs in Misrata loyal to the GNA declared mobilization in response to the attack by General Haftar, armed drones belonging to the UAE bombed the building of the Air Force Academy in this city. The al-Khoms-Zlitan-Misrata triangle, about 100 kilometers east of the capital Tripoli, is strategically important for the defense of the region. These three towns were very significant in the deployment of the Libyan armed forces and navy even during the Gaddafi period.

Time for a Turkish base in Libya

From the day the Memorandum of Understanding on Security and Military Cooperation between Turkey and Libya enters into force, there will be a legal basis for the TAF’s deployment in the triangle of al-Khoms-Zlitan-Misrata with its land forces and navy to boost the military capabilities of the GNA, at least by providing training and equipment, against the forces of General Haftar, which are known to be supported by the UAE, Egypt, France and Russia. We need to look back a hundred years ago to appreciate the significance of the naval power that Turkey might deploy in Libya under its strategy of moving its geopolitical line of defense beyond its borderlines. Italy initiated a series of secret treaties to colonize Libya following the French invasion of Tunisia in 1881 and the British invasion of Egypt in 1882. In 1887, this series of agreements with Britain and Austria-Hungary was completed in 1909 when Russia gave the green light for Italy’s invasion. However, Italy’s first penetration into Libya was not through its military, but in the field of the economy with the Bank of Rome. On Sept. 28, 1911, the Italian Kingdom gave a note to the Ottoman Empire to protect its investments in Libya and under the pretense of “bringing civilization to the region”. In fact, before this note, conflicts between Italy and the Ottomans had already begun in the Adriatic and Ionian seas (Preveza), and the Ottoman navy had lost the torpedo boats of Tokat, Alpagut and Hamidiye during these conflicts. The clashes that began on Libyan territory in the days following the Italian note produced disappointing results for the Roman administration thanks to the defense efforts led by Staff Colonel Neset Bey in Tripoli, Staff Major Enver Bey in Benghazi and Staff Major Mustafa Kemal Bey in Derna. Italy chose to employ its navy to force the Ottomans into leaving Libya. Yemen’s port of Hudaydah and the port of Beirut, which were under Ottoman control, were attacked by the Italian Navy. On April 18, 1912, defensive positions in Canakkale (Gallipoli) were bombed. The Rhodes Island was occupied following the Italian onslaught on April 24-May 17, 1912. The loss of the Twelve Islands was another side effect of the absence of a kind of navy whose power would match the sincere efforts exerted to save the Ottoman territory in Libya.
Having taken lessons from the mistakes made 100 years ago, Turkey is now building a dynamic line of defense from the Mediterranean to the Indian Ocean, and from Libya to Somalia, by fielding its UAVs and armed drones as well its warships, which are now all manufactured by Turkey’s national defense industry. On this path, which Turkey has been treading in keeping with the maxim “There is no defending a line, but rather a whole area is to be defended,” that “area” is now all of the world’s seas.