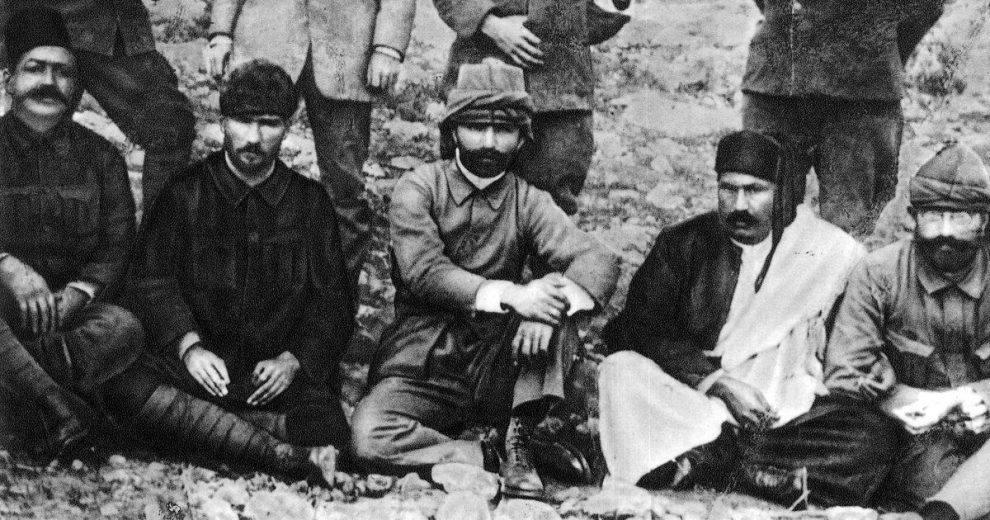 Sometimes your fate calls you back to old times. The spokesman of the founding party of the Republic of Turkey, providing his opinions in the discussion on the maritime jurisdiction agreements made with Libya, said: ”What are we doing in Libya? Do we want to make our troops legionnaires?” We only need to go back 100 years in history to refresh our memories on the occupation of Libya by Italians and the reason that Mustafa Kemal Pasha and Enver Pasha were involved in Libya.

When the “note” sent by Italy, requesting ownership of Tripoli and Benghazi, reached Grand Vizier İbrahim Hakkı Pasha on Sept. 23, he was playing bridge with Italian Robilant Pasha and his wife. Robilant Pasha supposedly was in Turkey for making reforms and improvements in the gendarmerie.

For a while, Grand Vizier Hakkı Pasha did not open the envelope and delayed the reply. Still awaiting a response, Italy sent a second note on Sept. 28 to be answered within 24 hours and announced that it would declare war.

Hakkı Pasha hurriedly gathered the Cabinet in his own mansion, and they together headed to the palace at midnight. In the reply written in the morning, it was declared that “Italy would be granted more commercial and political concessions if the occupation is stopped, and the territorial integrity of the Ottoman Empire is respected.”

Despite this reply, Italy declared war on the Ottomans on Sept. 29 and after bombarding Tripoli for one day from the sea, occupied Tripoli, which was protected by three companies of soldiers. The division in Libya had been sent to Yemen after Mahmut Şevket Pasha asked for reinforcements to squash the rebellion there.

The situation in Tripoli created chaos. Grand Vizier Hakkı Pasha resigned, saying, “The Grand Viziers in my position would be beheaded on steppingstones by the sultans in history.” Said Pasha was appointed in his place on Sept. 30.

Staff Maj. Enver, who was serving as military attache in Berlin, immediately came to Istanbul and met the Turkish sultan amid this critical environment. He had to run to the Libyan Front secretly with Fuat Bey (Bulca), his uncle Halil Bey Pasha, Ekrem Bey and his brother Nuri Bey Pasha. On the other hand, Ali Fethi Bey, the military attache to Paris, reached Libya via Tunisia.

However, this was not easy. The Ottoman Empire did not have any land connection with Libya because Egypt was occupied by the British, and the Italian navy controlled the sea route, ruling out travel by sea.

Enver Pasha made a plan. He would go to Libya by land through Alexandria in disguise. First, he sent a message to Circassian Kuşçubaşı Eşref Bey, one of the most trusted officers who was subsequently appointed to the management of Ottoman imperial government special forces (Teşkilât-ı Mahsusa), and asked him to go to Alexandria with the officers he trusted.

When Kuşçubaşı Eşref received the message, he was traveling between Bitlis, Muş and Van provinces with an officer from the Hamidiye Regiment and discussing and preparing a report on the situation of the region with the authorities. He quickly began to send messages by telegraph.

The news that the Italians attacked Libya began reaching everyone quickly by telegraph. Kuşçubaşı Eşref sent his first message to Süleyman Askerî in Baghdad, who had been his friend since his military education in Edirne, and then to the others.

The group’s journey to Tripoli began in mid-November. Kuşçubaşı Eşref separated everyone into small groups in order not to be caught by British patrols, but when Mustafa Kemal became ill, they let him stay with a Greek doctor, Çaçatis. Mustafa Kemal was unable to leave Alexandria until Dec. 1, 1911, and went to serve under the command of Enver Pasha in Derne province. When he managed to infiltrate Sireneykaya nine weeks after the start of the war, he began hearing the cannon sounds that the soldiers called Enver’s ball (midfa’i Enver). Mustafa Kemal was seriously injured in the eye during the most intense period of the war. He was treated by Kuşçubaşı Eşref in Vienna after returning from Libya.

Enver Pasha arrived in Libya on Oct. 19 and started to organize the resistance in Derne and other regions. In a short period of time, he managed to gather a local force of 20,000 people and issued money for his name.

The 1,320 kilometers of coastline between Egypt and Tunisia was occupied by the Italians at the end of October; however, they were unable to occupy even a few kilometers in the interior part of Libya because Staff Maj. Enver Bey had come with his team and showed strong resistance, especially with the voluntary units made up of the Senussi tribe. The Senussi tribe had been active for 80 years, after coming from Mecca in 1830, and were lead by Seyid Ahmed Senûsî.

This resistance begun by Enver Bey continued until 1939, but Benito Mussolini, who came to power in Italy, was able to break this resistance with the support of the air force. The Senussi family, the sheikh of the sect, dominated all of North Africa. Enver Bey and his team visited Senûsi Sheikh often and received prayers from him. Mustafa Kemal, who met Seyid Ahmed Senussi here to be caliph after Seyid Ahmed Senussi, came to Anatolia to support the national struggle.

We have refreshed our memory with some brief information available in history books. We hope that the founding party of the Republic of Turkey reads the history from 100 years ago and never asks such strange questions again. They should not insult the spirit of the Ottoman officers and Ottoman imperial government special forces (Teşkilât-ı Mahsusa) who have achieved great things in history.