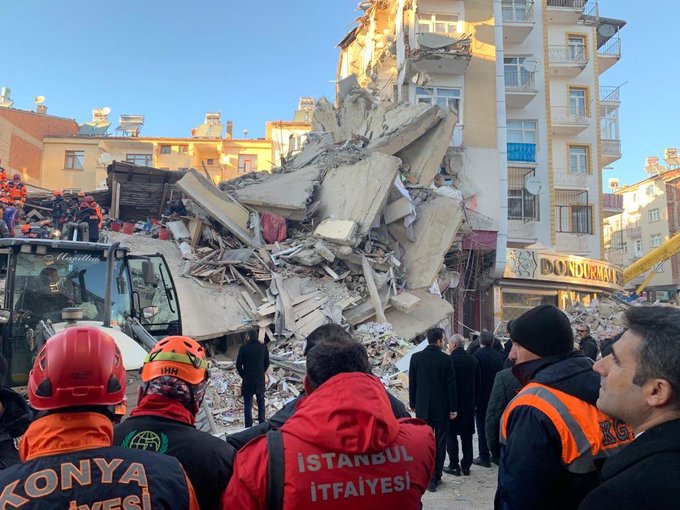 We received very sad news coming from Turkey’s eastern province of Elazığ that also shook all of us last Friday. The 6.8 magnitude quake had rocked the vast swath of the eastern part of Turkey even reaching to its some neighbor countries such as Georgia and Syria.

As of today, according to the Disaster and Emergency Management Authority (AFAD), as many as 41 people have unfortunately lost their lives and more than 1000 people injured, 18 of whom are still under intensive care at various medical facilities located in the region.

First of all, we offer the deepest sympathy and condolences for the whole people who lost their lovely ones and also wish a fast recovery for the injured people who survived from the earthquake.
This natural disaster has shown us one more time how much helpful and kind Turkish people were in cases of such emergency situations. The state with its whole institutions rapidly reached to the affected areas.

After witnessin the 1999 earthquake of Turkey taking place in the Marmara region that resulted in the lose of thousands of people and the utmost weak stance of the state that could not reach to the stranded people even five days after the quake,  we now see well how much strong steps have so far been taken in this context.

However, we can of course not say that we are full ready and have completed the whole necessary measures that need to be done to reduce the bitter results of any earthquakes.

We must not forget that, Earthquake is a natural disaster and the more buildings are built by the strict control mechanism along together with the surveillance of state, the less casualties are to be.

No one or power in the world is able to know which time and where an earthquake will happen. But as has always been said, quakes don’t kill but weak buildings and poorly structured houses or apartments do.
No one must accuse the government. Those who have a bit  conscience are unmistakably seeing whatever have been done immediately after the latest disaster and how faster and efficient the state in reaching to ease the people in trouble. Up until a few decades ago, in case of such a disaster, Turkey had to take some military intervention and outside help to duly struggle with the matter but today we see that Turkey rejected the whole offers coming from various states.
We have to prepare a full-fledged short term plan in which those old structures located on dangerous areas must be determined and then replaced with the new strong ones. If we don’t do this, unfortunately similar scenes like we have freshly seen both in Malatya and Elazığ will be seen in other parts of the country.

As long as Palestine remains oppressed, the world is devoid of justice
‘Kemalist bureaucrats’ as a term of abuse
Comment