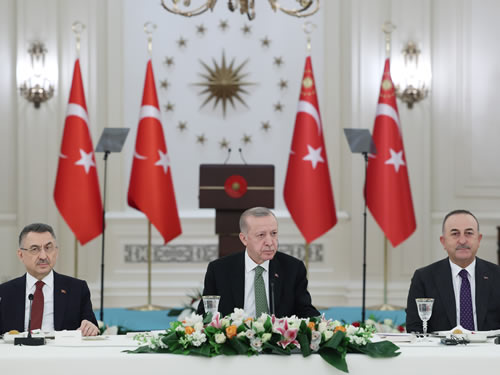 President Recep Tayyip Erdoğan recently disclosed that his government plans to be a member of the Shanghai Cooperation Organization (SCO) in near future.

The SCO currently represents non-Western powers such as China, Russia and India. Having turned its attention to the West in the last two centuries, Türkiye’s likely membership in the SCO will mark the end of an era in the country’s history. Yet, Ankara’s final decision depends on Western states’ attitudes rather than Türkiye.

We should remember that Türkiye and Greece had applied to be associate members of the then-European Economic Community (EEC) in 1959. While Greece became an EU member in 1981, Türkiye is still kept waiting due to baseless reasons such as a large population, being a Muslim country, a democracy deficit and an undeveloped economy. Other candidates had the same insufficiencies but they were still welcomed by the European Union.

Besides the Turkish elites’ desire to be a part of the West, the EU was seen as a way of sustaining economic development. Thus, the EU membership would be a gift to the Turkish state and the people through which Türkiye would enter a wealthy world. However, the decadeslong patience’s fruit was just disappointment. No Turk believes that the EU will ever accept the country as a member.

On the other hand, Türkiye has gone through a fast process of development in the last 20 years and it is stronger than ever. It has become a regional actor that none can ignore. Moreover, if political turmoil had not taken place in the last 10 years, as per estimations, it would have a $1.5 trillion (TL 27.60 trillion) gross domestic product (GDP), which is almost equal to the Italian economy’s size. Despite pauses, a boom in the Turkish economy is not out of sight. Even if the expected boom does not happen, it can still be said that Türkiye is not the old poor country.

The country is strong and this strength attracts all political blocs in the world. In fact, when Türkiye hinted at SCO membership 10 years ago, other members politely rejected it. But they will be pleased to see Türkiye among themselves now. As stated above, Türkiye cannot be ignored in its region as it is close to all battlefields and a buffer zone between safe regions and warring ones. If migrant influxes are slowing down, if the grain is exported from Russia, and if gas flow is to be ensured from East to West, Türkiye’s help is needed more than any other country.

Previously, Türkiye’s location and foreign policy were not vital but now it has become a significant mediator for ongoing conflicts and wars, from Libya to Ukraine. Contrary to Türkiye, the EU is in a defensive position and either remains silent or tries to find ineffective solutions. The union still uses economic tools to secure itself but it doesn’t work. In addition, using Ukraine as a proxy against Russia has culminated in economic difficulties on the continent.

Loss of trust in the West

In such circumstances, the confident Türkiye now believes it no longer needs the EU and will not knock its door again. Instead, Ankara prefers to utilize its upper hand and maximize its interests. It can be said that besides being a pivotal country, what pushed Türkiye to act so independently is the loss of trust in the West. Unrealizable EU membership, the humiliating candidacy process, hostile acts such as undeclared embargoes and hosting terrorist members have all made Türkiye build a new road between the contending groups of countries.

In other words, Türkiye does not want to choose a side but wants to be chosen by either side with lucrative promises. Had the EU and the United States not estranged Türkiye, the process would probably have taken a different direction, which would have been in favor of them. But since weak and loyal Türkiye was belittled, the strong Türkiye wants to utilize its advantage now.

Based on the new circumstances, Türkiye will not tolerate more disdain from Western powers and will only align with the West provided that it is given an honorary position free of conditions.

Particularly Greek and Greek Cypriot administration blackmail, tolerance of terrorism and requests like parting ways with Russia will further uproot Türkiye from the EU. Since Türkiye has alternatives, it will not hesitate to align with them or remain in the middle.