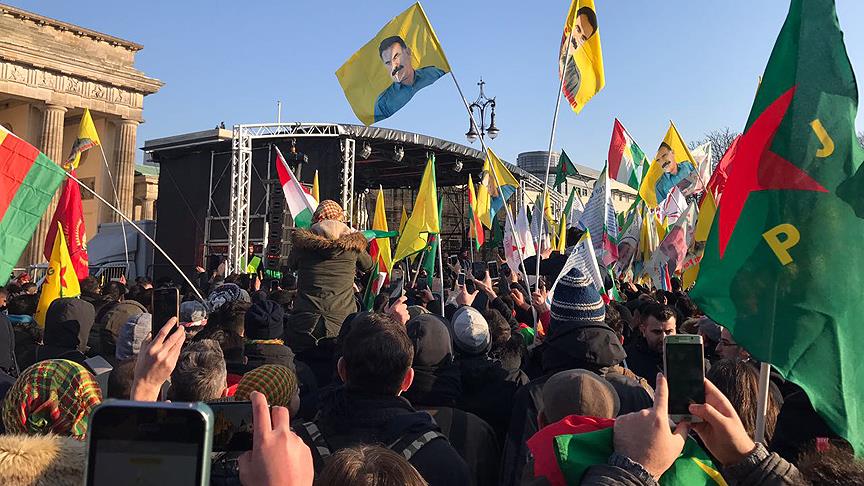 Berlin’s refusal to take action against the PKK, despite acknowledging the terror group’s activities, defeats the purpose of NATO.

While the terrorism-related dispute between Türkiye, Sweden and Finland over NATO membership continues, Thomas Haldenwang, Germany’s chief of domestic spy agency BfV, has finally acknowledged that his country is home to PKK terror group’s members and activities.

Haldenwang’s admission nevertheless lends credence to Ankara’s opposition to the bid for NATO membership by Sweden and Finland, two countries known to provide a safe haven and support towards the PKK and its violent acts.

The intelligence chief’s assessment also vindicates Türkiye’s long-standing position that the PKK has penetrated deep inside Germany with the blessings of the country’s leadership, which has completely ignored Ankara’s warnings and allowed the terror group to play the victim card across Europe.

Haldenwang’s admission should have sent shock waves across German society, but because the German authorities have normalised the presence of terror groups on their soil, there has been no public outcry.

The German government justifies its position by misleading the world in accusing the Turkish state of violating the rights of Kurds. The allegation has no ground because Türkiye is home to between 12 to 15 million Kurds, who are also at odds with the PKK. In Türkiye’s Diyarbakir province, scores of Kurdish mothers have been staging protests for more than three years, demanding that the PKK release their children — children whom the terror group has abducted in a bid to swell its ranks.

Yet Germany has embraced the terror group by granting asylum to criminals who are involved in crimes like murder, drug trafficking and terrorism. For example, Muzaffer Ayata, a founding member of the PKK and in the red category of the Turkish Interior Ministry’s ‘Wanted List,’ continues to live in Germany.

Though lower than expected, if the figures provided by Haldenwang are correct, this means that the number of PKK members living in Germany (14,500) is equal to half of Daesh’s combatants in 2014. In addition to providing financial support to the PKK, at least 295 out of 14,500 group members living in Germany have fought alongside the PKK. This dynamic emboldens PKK to continue looking for new recruits in Europe, posing a direct threat toTürkiye, which has been battling the terror group since the 1980s.

Germany’s anti-Türkiye stance extends beyond PKK terrorism. The country is also a hotspot for another terror group known as FETO, which plotted the July 15 failed coup attempt against the democratically elected government in Türkiye, claiming the lives of hundreds of civilians. Germany has become a safe haven for its members, including the senior perpetrators of the July 15 failed coup. Many fugitives linked to fringe ultra-leftist terrorist organisations like the DHKP-C are known to have been spotted in Germany.

For Türkiye, Germany has turned into a wolf in sheep’s clothing. As a fellow NATO partner, Berlin should long ago have cracked down on these groups that reassemble on European soil after Ankara foils their terror bids in Türkiye, Iraq and Syria.

Letting them off the hook in places like Germany is akin to letting Daesh or Al Qaeda go scot-free. For a neutral observer, it’s sheer hypocrisy. And Berlin can’t keep defending the indefensible for too long.

As Sweden and Finland are following in Berlin’s footsteps when it comes to providing safe havens to anti-Türkiye terror groups, it should come as no surprise that Ankara is wary of letting the two Nordic countries enter the transatlantic alliance whose cornerstone is safeguarding the national security of every member-state.

Here’s what makes Germany, a NATO partner, so dodgy: The European Union has identified the PKK as a terrorist organisation, yet several EU states, especially Germany, have become sanctuaries for the PKK, enabling them to raise funds, indoctrinate children and teenagers, and recruit new members.

While post-World War II Germany takes pride in dealing with its Nazi past by passing laws that have criminalised Nazi salutes and associated symbols such as swastikas, it has also shown total disregard for a rules-based international order. Türkiye has borne the consequences of such conflicted policymaking from its NATO partner. Beyond Türkiye, if you consider Ukraine’s case, Berlin has also harmed Kiev’s security by denying its entry into the EU and NATO only to appease Russia.

It’s important to identify such foreign policy disasters because the inherent dishonesty shown by partners like Germany has emboldened competing powers to the point that Ukraine is today paying the price.

And one must identify Germany’s lackeys, too – Finland and Sweden, two of the PKK terror groups biggest supporters, need a course correction before having the audacity to apply for a NATO membership bid.

So far, the German government led by Olaf Scholz has made a laughable contribution to Ukraine: it has merely sent a few dozen military helmets to bolster the Ukrainian defences. While NATO expected more from Berlin, Scholz has been dithering over a heavy-duty arms supply to the conflict-torn country.

While Western powers, especially Eastern European countries, want Germany to take a more proactive role, Germany has let them down.

Not too long ago, when Angela Merkel led Germany, Europe was on the brink of facing a massive refugee influx from Syria. Amid the leadership crisis, the EU was scrambling to contain the fallout of the refugee crisis until Türkiye stepped in to take most of the burden.

Merkel later signed a refugee deal with Türkiye to save the EU from dissolution. Again, Germany lied and used deceit to backtrack from most of the commitments it made under the deal.

If one looks at the big picture, Germany has enabled two things: terrorism against Türkiye and a refugee crisis of an unprecedented scale that has put a major strain on the country’s resources.

Ukraine and Eastern European countries are now seeing the real face of Germany, which has ensured that Ukraine is kept away from NATO’s doorsteps — and away from heavy-duty German weapons too.

Given Germany’s aversion to both fighting on the front lines and supplying Ukrainian soldiers with supplies, Berlin does not deserve to be the EU’s leader.

As the perpetrator of two world wars, Germany now tends to distance itself from wars and conflicts. But one’s past is an inextricable part of one’s identity. In the 1930s, the New York Times referred to Nazi officials as ‘moderates’ — a word that well describes how much of the world sees the leaders of present-day Germany. What made Adolf Hitler a bloodthirsty monster is something to ponder; the otherisation of Jewish minorities in Germany had started before Hitler was even born. The world should be worried because today, it’s Turks Muslims, Blacks and other minorities who are facing systemic discrimination in Germany. The rise of the neo-Nazi AfD is a big danger mark.

Every sane-minded person in the German state must reflect upon where their country is heading and what sort of alliances it wishes to build with its neighbours. If it seeks to backstab allies like Türkiye in a bid to reap short-term benefits, the country is simply dragging itself back down the same dark path of its Nazi predecessors who sought global supremacy.

Berlin should engage in some introspection and mend ties with those who seek to build a better world.