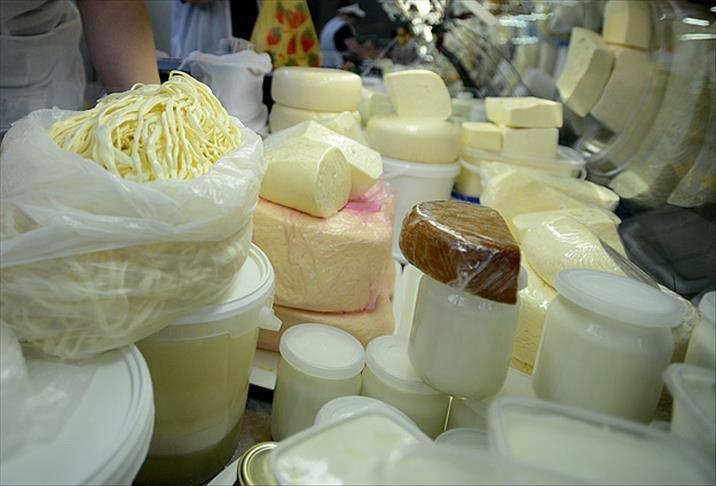 Most studies place the types of cheese produced in Turkey at around 200, but given that the concept of milk processing originated in this region, the number is probably somewhere near 300, according to an expert on the much-loved dairy product.

“Balikesir, in Turkey’s Marmara region, alone has 50 types of cheeses, so it is very likely that detailed studies will find many more being produced in Turkey,” Nese Biber, a researcher and author, told Anadolu Agency.

She stressed that domestication of animals, consumption of milk, and using it to make yoghurt and cheese are significant parts of Anatolian history.

“Cheese has been made in Anatolia since 7,000 B.C., spurred by the use of pots. When pottery vessels became a part of daily life of Neolithic people, the first cheeses were produced by the natural solidification of milk stored in those vessels,” Biber explained.

Today, there are 2,000 varieties of cheese in the world, she added.

According to her, the world’s advanced economies account for 82% of global cheese exports.

Biber said Turkey only exports industrial cheese products and not the types of cheese it produces locally.

That, she added, is one of the main reasons why the country’s position in the world cheese market does not reflect its actual potential.

“The world’s cheese production is around 23 million tons, and the EU produces 44% of this figure. In Asia, Turkey remains the leading cheese producer with 707,000 tons in annual output,” said Biber.

Turkey’s annual milk production is around 23 million tons, with cow milk making up a majority – 20 million tons – of the total output, she added.

“Over the past 30 years, there has been a 59% increase in global milk production. Today, India leads the world in milk production with a 22% share,” she said.

Some 150 million families are engaged in the global milk production sector and over one billion people earn an income in this field, according to Biber.

“Turkey is among the top 10 in terms of cow milk production in the EU. It is also ranked in the top three in global sheep milk production along with China and Greece,” she said.

Touching on the issue of geographical indication, Biber said Turkey only started using the system in 1995, while others have been relying on it for hundreds of years.

“There are over 3,200 registered cheeses with geographical indication in the EU. From Turkey, though, there is not a single one,” she said.

According to the European Commission, cheeses that have a geographical mark are more valuable, she recalled.

Citing Italy’s Parmesan cheese as an example, she said it is has been highly coveted since the 13th century and generates some $2.5 billion in exports for the country.

Biber said cheeses made from raw cow milk or goat and sheep milk can be special products from Turkey, stressing the need for the country to focus on quality in local production.

“An umbrella structure is necessary to ensure quality, price regulation, and sustainability in the sector,” she underlined.

“It is also important to take steps such as legislation, along with promoting studies and research on traditional cheeses by considering regional needs.”

“An umbrella structure can cover all of these steps,” the expert added.

Speaking about her business, Antre Gourmet, Biber said it is not just a commercial enterprise, as it also aims to support traditional cheese producers in Turkey.