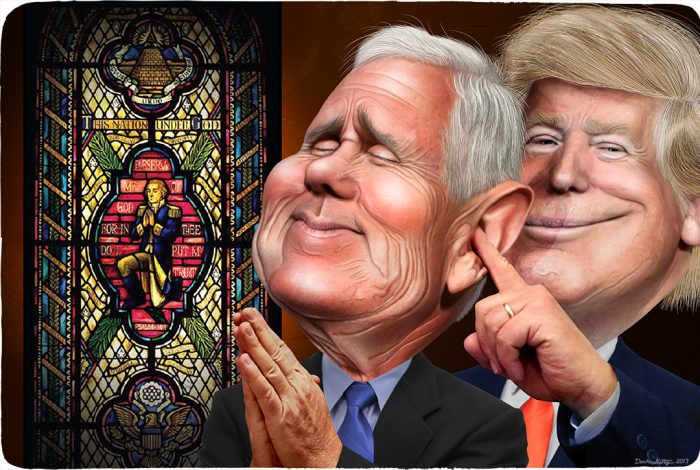 The US government, being a safe haven for FETO fugitives that attempted a failed coup in 2016 and also creating a safe haven for PKK/YPG/SDF in Northern Syria, has put sanctions on assets of two Turkish ministers, basing it on their involvement in detention of Pastor Brunson who was arrested due to espionage almost two years ago. What is bizarre in this case is that Turkish Justice Minister, Abdulhamit Gul, has no assets in the US and he was not incumbent when pastor was detained.

Like Brunson, both Trump and Pence are members of Evangelical church. Hence, their unfair and silly policies against Turkey are religious more than political. Congress elections that to be held in November are also a reason for sanctioning Turkey as such that they want to give a strong message to their people that they can do whatever required to release their beloved priest. Vice President Pence should also have an additional agenda; gaining popularity in order to be a candidate for 2024 elections.

Politically, sanctions announced yesterday certainly have symbolic value. Yet, it is obvious that what aimed is to affect Turkish FX markets. Current USD/TRY parity shows that they are about to achieve their goal as Lira has lost around 3% since yesterday. Perhaps, Lira will plunge more in upcoming days, worsening Turkish economy more. But Turkish government does not seem to give up against US threats. As neo-con Jonathan Schanzer stated, Turkey is responding with a knife to a gun. However, he and other radical policy-makers don’t understand that what is important is not who wins the battle but who stands behind its cause.

For sure, Turkey won’t step back against US sanctions even though it incurs to heavy costs. Moreover, already being in pain due to American support to terrorist groups, Turkey will have to distance itself from the US and European countries. Some experts even argue that American and European pressures are a deliberate strategy in order to draw away Turkey from their periphery. Regardless of their intentions, Turkey is moving to another direction which is not parallel to that of the West.

There are several reasons for this forced change. First of all, Turkey is disappointed with policies of its Western allies. While the US supports terrorist groups which Turkey already fights, the EU did not fulfill any promises given to Turkey. Turkey’s EU membership is open-ended and none believes it will happen soon or later. Turkish government and people are quite angry with EU’s distractions. Second, Turkey is aware that the West is no longer the only alternative as countries like Russia and China have become considerable powers. In other words, international system is becoming multi-polar and, hence, being an independent country is preferable for Turkey’s interests. Third, Cold War’s worldview and institutions are not satisfactory for Turkey which grows fast and is about to be a regional power. For example, being a member of NATO did not only prevent growth of indigenous defense industry, it also did not allow to buy weapons from other countries. What is more disgusting is that NATO members did not sell weapons to Turkey in spite of being allies.

Near future might be a bit painful for Turkey but motivating impact of sanctions may lead Turkey to find ways for self-help and self-sufficiency. Hence, Turkey will be the winner in the long-term.