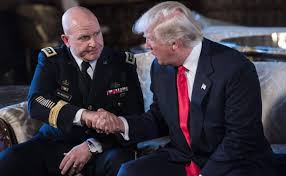 U.S. President Donald Trump single-handedly took his country out of the Mideast peace process with his outrageous decision on Jerusalem. He did what the U.S. has shunned doing the last 100 years: He recognized Jerusalem as the capital of the state of Israel.

This paragraph needs a small correction: He did not do it so single-handedly. He has been holding the hands of people he calls “my generals.” Namely, Herbert Raymond McMaster, the national security adviser, John Kelly, the White House chief of staff (previously secretary of homeland security), James Mattis, the secretary of defense (previously the commander of U.S. Central Command (CENTCOM)), and Mike Pompeo, the director of the CIA (a graduate of the U.S. military academy at West Point), as the members of the ruling junta of the Trump Administration (thanks to Stephen Kinzer of Boston Globe for the metaphor of the century).

Trump’s initiative had the Organisation of Islamic Cooperation heads of state and government, foreign ministers from 49 countries rush an extraordinary emergency meeting in Istanbul and issue a communiqué that declared east Jerusalem as the capital of Palestine. (A minister of religious affairs from Saudi Arabia showed up, should the subject of prayer times come to the agenda, I guess.)

Everybody was impressed, even the Turkish main opposition Republican People’s Party (CHP), which traditionally opposes everything the ruling Justice and Development Party (AK Party) undertakes; except the prime minister of Israel. Mr. Netanyahu said, “All these statements fail to impress us.” Mr. Ahmadinejad used to impress him, but since his departure from the seat of Iranian presidency, the torch of making Armageddon happen and thus Jesus return has been passed from Shiite eschatology club to Trumpian dystopia association known as evangelical trust fund.

Mr. Trump also seems not to be impressed by the unanimous ratification of east Jerusalem as the capital of Palestine by some countries that have not so far recognized Palestine as an independent entity. In Brussels, the leaders of the European Union rejected the idea. Quite on the contrary, EU leaders said that recognizing Jerusalem as Israel’s capital is illegal according to existing international law.

Yet to add insult to the injury, Trump, instead of taking his Jerusalem step back, added Jerusalem’s Western wall into what he expects to be the eventual borders of Israel. The Western wall, also known as the Wailing Wall (which for the Jewish people is a pejorative description) is not inside the pre-1967 borders of Israel; it is very close to some of Islam’s sacred sites. In the related press release, this time the White House was careful to say that the final borders of Israel and Palestine should be settled in negotiations, but this announcement was construed by Muslims as just U.S. insistence on taking Israel’s side on the issue.

For The New York Times, it is just another “typically grandiose and poorly thought-through political gesture” of Trump’s to “come out of the blue.” A newspaper of record cannot be that simplistic. It is not a poorly thought gesture aimed at domestic consumption or support Netanyahu who, like himself, is looking at a case of impeachment after his sixth testimony as a suspect in two investigations into allegations of “fraud, breach of trust and bribes.” Like Trump’s own people, Netanyahu’s chief of staff signed a deal with prosecutors to testify against him.

The New York Times and other media outlets should see the real source of that “grandiose gesture.” It is not happening in a void. All these are meticulous plans that were worked on by the best minds of the U.S. military; they are part and parcel of CENTCOM’s plans to provide better security for Israel and Middle East oil. Under the guise of human rights and self-determination of their political future, Iraqi Kurds pushed a declaration of independence from Iraq. They are planning to do the same in Syria.

When will they learn?

The problem of leaders worshiping the power.
How desperate is Israel?
Comment