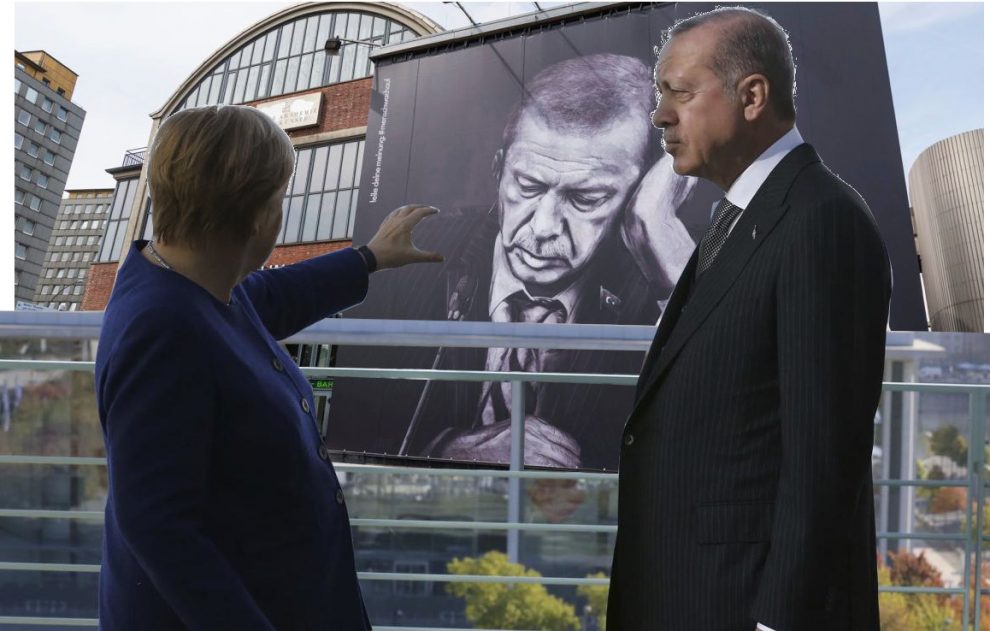 During the Three-day state visit of President Recep Tayyip Erdoğan to Germany, an advertising campaign was harassing the Turkish President.

Alongside the route of his convoy, Wall billboards display the face of President Erdoğan associated with the Nazi salute also known as the Hitler salute.

The use of this salute “Sieg heil!” (“Hail victory!”) is prohibited by criminal law in Germany. This may be one reason why the billboard says “Zieg geil!” instead of “Sieg heil!“. The main reason of using the “Zieg geil!“ may be its offensive nature.

“Zieg geil!” is printed in Tannenberg Fett font. This typography was designed by Erich Meyer in 1933 when Adolf Hitler’s seizure of power took place.

Other Wall billboards alongside the main boulevards of Berlin show President Erdoğan behind a no sign with a red colored circle-backslash symbol. This offensive billboard is slandering President Erdoğan by saying „Erdoğan not welcome“. The billboard also calls on people to join anti-Erdoğan rallies in Berlin on 28 September and in Cologne 29 September.

The billboards which are harassing President Erdoğan are operated by Wall GmbH, an international advertising corporation based in Berlin.

According to media reports, Hans Wall, the founder of Wall GmbH, is a member and donor of Germany’s far right anti-Muslims party AFD (Almanya için Alternatif).

Wall GmbH has a subsidiary in Turkey: the Wall Anonim Şirket in İstanbul.

Ömer Bilgiseven is the CEO of the Wall Anonim Şirket in İstanbul. In February 2018 Mr Bilgiseven was arrested for blackmailing. A media report arouses suspicion that Mr Bilgiseven might have links to the FETÖ terror organisation (Fethullahçı Terör Örgütü).

Update: Wall GmbH said on Twitter after the publications of this article: “The Posters were put in illegally and we are removing them.” Source: https://twitter.com/wallgmbh/status/1046454555645530112

After this Tweet, I spoke to a law enforcement officer who is dealing with this criminal case. He told me that around 50 billboards slander President Erdoğan by displaying the posters. These billboards are now considered as crime scenes after I published my research at my social media channels.

When I went to another billboard in order to document the offensive against President Erdoğan, a police car drove into my film recording and three police men came into my direction. I published the incident on my YouTube channel: