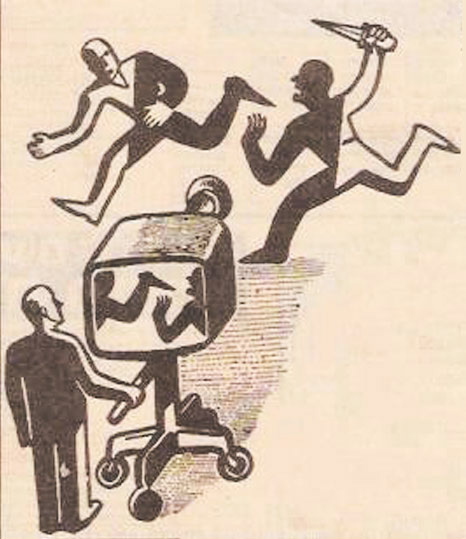 Mustafa Gok is a habitual offender and a hardened criminal. He is reportedly a member of DHKP-C, Revolutionary People’s Liberation Party/Front, an outlawed terrorist organisation responsible for political assassinations.

According to the Turkish Ministry of Justice, Mustafa Gok has a string of offenses dating back to the 1990s. He was charged and convicted for carrying a false identification card; for attempting to rob Eyup Rami Bank; for murdering Commissioners B.U. and M.U in Kucukkoy; for bombing Kartal Tekel’s supply depot; for bombing Pending Anavatan Party building; for kidnapping D.Y. from his home; for injuring Commissioners and Police officers in two separate occasions, on 23/03/1992 and 05/04/1992; for bombing a bus and injuring police officer A.S; on another occasion for targeting a police bus and exploding a bomb with the intention of murdering those inside.

Mustafa Gok also happens to be the Ankara correspondent for the Marxist-Leninist magazine Ekmek ve Adalet.

When human rights organisations and the mainstream media criticise Turkey for suppressing press freedom they recognise terrorists like Mustafa Gok as “journalists”. [*]

Mustafa Gok isn’t a special case, nor is he an exception amongst a list of “journalists” who have been detained by Turkey for charges relating to terrorism or other serious offenses.

Mazlum Dolan is another such case, a reporter at Dicle News Agency (DIHA), he was caught with explosive devices in Diyarbakir and charged with preparing, transporting and planting these devices. Despite these serious offenses he is described as a “jailed reporter” on many news websites, including the website of the Committee to Protect Journalists (CPJ).

Journalism is not a crime, this is one of those universal truths that no civilised country denies, including Turkey.

Admittedly though the list of jailed Turkish “journalists” is long, but these “journalists” were not arrested for having a critical voice or for “reporting the news” about Turkey, as is often falsely described in the Western media; as I shall demonstrate in this article, the vast majority of those arrested are linked to various terrorist organisations, including DHKP-C, FETO, PKK, ISIS and MLKP.

Turkish government’s “crackdown on journalism” or its “heavy-handed treatment of journalists” isn’t about suppressing the truth or the public’s right to know, it isn’t about attacking press freedom or freedom of expression; it is about national security, it is about protecting the Turkish public and countering terrorism.

While this may sound cliché and present little of value to some, especially to those who are not aware of Turkey’s politics and complex history, we must remember that Turkey was put through a tremendous trial in 2016 when the Gulenist terrorist organisation (FETO) attempted a military coup, which resulted in the deaths of 251 Turkish citizens and injuries to around 3000.

Gulenist groups infiltrated the upper echelons of the Turkish state and influential spheres of civil and social life, including the media. They were on a mission to topple the Turkish government in pursuit of their own agenda.


“Richard Moore, The UK Ambassador to Turkey says the UK knows very well that the Gulenists were behind the military coup” 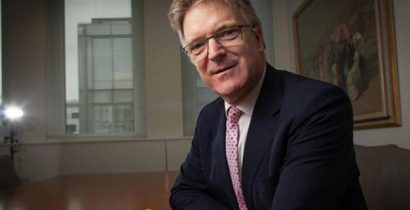 In 2015, the Turkish government cracked down on these groups after it came to understand the extent of this organisation’s infiltration and pernicious practices. The Gulenists slowly started losing political and social influence in Turkey but despite this, they were still able to organise and execute a sophisticated military coup that almost succeeded.

Given this fact, anybody who argues that Turkey is overstepping its obligations and detaining “journalists arbitrarily” is categorically wrong. The deaths of 251 Turkish citizens during the 2016 military coup attempt should serve as a constant reminder about what can happen if these terrorist organisations go unchecked.

Turkey is within its full right under international law and human rights standards to actively protect its sovereignty and its people from terrorism and terrorism related activities.

Under the guise of journalism and press freedom the Turkish government has come under unremitting and defamatory attacks.

In 2014, Cumhuriyet’s editor-in-chief Can Dundar released footage of police officers opening crates of weapons in the back of a truck, which was bound for Syria. Can Dundar and his newspaper alleged that these weapons were being sent to ISIS by the Turkish Intelligence Agency (MIT) and just like that “Turkey was supporting ISIS” in the eyes of the world. What an incredibly defamatory campaign this turned out to be. 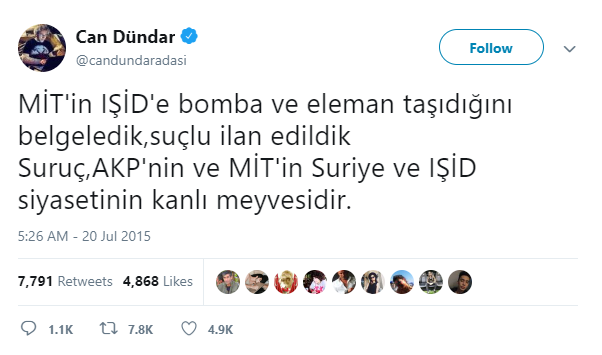 Turkey was the first country to declare ISIS a terrorist organisation, it listed this group as such on October 10, 2013. Turkey actively fought and defeated ISIS on many fronts in Syria, including Jarablus and Al-Bab. It was subjected to suicide bombings by ISIS on several occasions, yet because of the defamatory statements and articles like those published by Can Dundar, Turkey soon became known as a country supporting terrorist organisations in Syria.

Later it was revealed that Gulenists tipped off Can Dundar about the trucks that were shipping weapons to Syria. Those police officers which stopped the trucks were also Gulenists. Davutoglu, the Prime Minister at the time revealed that the weapons were being shipped to Turkmens, who had come under attack by hostile forces in Syria.

Imagine just for a moment that a reputable newspaper like New York Times publishing articles about the US government shipping arms to Al-Qaeda and sending mercenaries to assist terrorist organisations. This is exactly what happened in this case. What would the US government have done? What would any country do when the editor-in-chief of a major newspaper publishes inflammatory lies about its own government? Accept it and look the other way under the rights afforded to journalists by freedom of the press? No, the US and every other country subjected to similar mendacious propaganda would take lawful action.

The true story about Can Dundar and the so-called attempt by the Turkish government to silence dissenting voices looks vastly different when such an analogy is presented, doesn’t it?

What is worse is that Can Dundar was given asylum by Germany and welcomed with open arms by many countries around the world. Shamelessly, he is still given a platform where he continues to unjustifiably attack the Turkish government.

Despite the arrest warrant issued by Turkey for Can Dundar, his newspaper Cumhuriyet, which is a well-known oppositionist newspaper is free to operate in Turkey and it continues to print critical articles about the government; this is press freedom in action.

It is also worth noting that individuals whose opinions about Turkey are sought by the mainstream media and academia are fully supportive of Can Dundar under the guise of defending “press freedom”. Steven A Cook, a senior fellow at the Council on Foreign Relations, even went as far as equating Can Dundar’s case with that of Jamal Khashoggi’s! 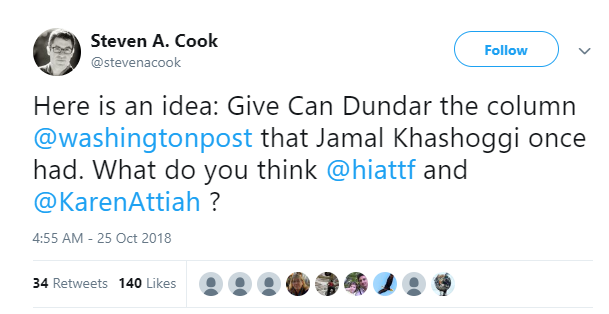 Press freedom does not entitle a “journalist” to make defamatory and false statements that potentially put at risk state security and the lives of many.

It is difficult for Turkey to defend against the deluge of propaganda found in the Western media when even these so called “experts” called-on to speak about Turkey present a  biased point of view; they are not ignorant and they understand what is going on but they choose to present Turkey in a negative light, for reasons only known to them.

Here is Howard Eissenstat from St. Lawrence University commenting about Can Dundar’s case:

“The case is one of many in which journalists have been targeted by the government for reporting the news.

Can Dündar and Erdem Gül should be immediately released.  The war on journalists must end.”

Below is a list of individuals who are often presented as journalists when criticising Turkey and its so-called crackdown on press freedom.

Next to these names are the publications that they are associated with and the actual crimes they are charged with. Reviewing the reasons for arresting these individuals, it’s not difficult to see that they’re on trial for heinous crimes and not for their journalistic acumen.

There are a number of other “journalists” who have been arrested on charges linking them to the Gulenist terrorist organisation. I will continue to add new names to this list as information comes to hand.

The birth of the republican Turkey: A nation’s path to independence
Why Erdoğan told the ‘half-naked’ truth
Comment