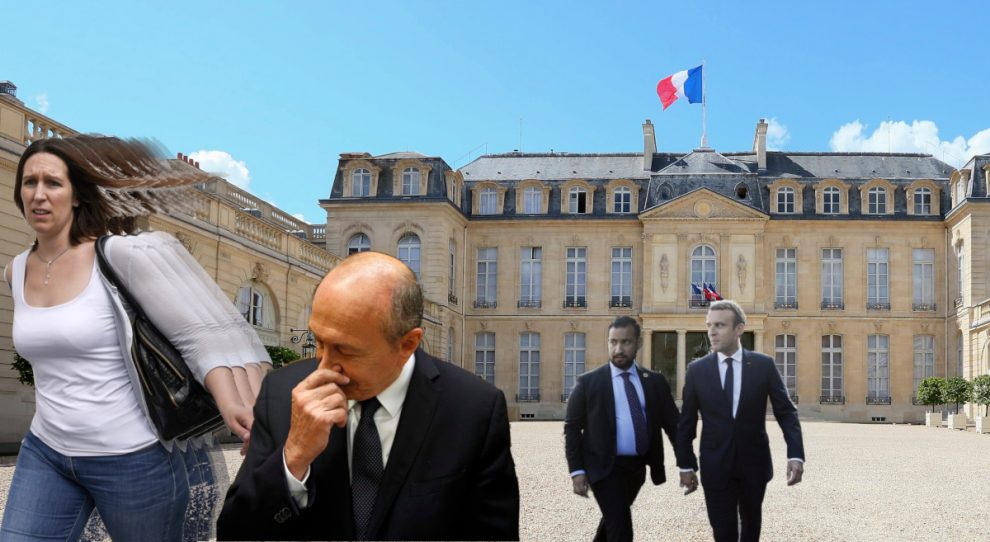 President Macron’s supporters prefer to compare him to President Obama rather than President Nixon, and believe he will survive the storm.

First heat waves of the summer season in Paris have produced an unusual sweat and wet in the town; everybody is trying to keep his house cool, including President Macron, whose office was struck by a political summer thunderstorm on the Élysée’s Palace roofs, causing severe collateral damage in high positions among the State’s public servants, homeland security officers and his high cabinet members, i.e., the Interior Minister, the nation’s First-Cop, Mr. Gérard Collomb.

A political storm that has already got the flavor of an Affair of State or a scandal, involving French President Emmanuel Macron’s personal security advisor and bodyguard. Mr. Alexandre Benalla, caught in a video leaked to le Monde newspaper, beating up May Day demonstrators while presenting himself as a civil police officer.

Since the story broke, the French media and the buried opposition, the Far-right (RN), the right (LR), the Center (UDI), the far-left (la France insoumise), left (NG ex-PS) and the Communists PC) alike, have all resurrected. It is making noises on the Parliament’s  (Nationale Assemblée) floor to some extent, the mosaic French political opposition has demonstrated its concern for the homeland security and the institution’s functionality in a classy political adversity.

This storm is roasting the President’s Staff in the Palace, avoiding the story to lead to a scandal. It is not Jean Paul Gaultier’s perfume fragrance for women featured in a commercial spot, a glamorous young woman exiting a classy French black Citroën in the Élysée Palace forecourt, skipping the journalists’ questions, “calling her, Madame la Ministre !” The “Benalla affair” has become anything but fiction. It is the “Benalla-Macron scandal,” as Mr. Edwy Plenel, the Mediapart Director put it, and France’s “Watergate” as Ms. Le Pen told the press at the Parliament.

Meanwhile, the President and his PR team are fighting the fire to avoid it reaching his office; nonetheless, he appeared as Fire Chief on Tuesday evening with his cabinet members and his majority MPs, breaking his silence over the Benalla “affair”, saying “I am to blame,” as he denounced Mr. Benalla’s comportment as a disappointment and a treason.

Yet the story keeps unfolding and every hour a new revelation is coming out about Mr. Benalla’s job description outlining his position and professional advantages.

Why all these privileges and favoritism for a simple bodyguard who became the nation’s super-cop and the President’s right hand and arm, when did this start and how will it end? The opposition keeps asking and the media keep commenting.

President Macron’s Deputy Chief of Staff in the Élysée, Mr. Patrick Strzoda, took full responsibility for his decision regarding the action of Mr. Benalla on May Day at la place de la Contrescarpe (Ve arrondissement). Gérard Collomb and Paris Police chief Michel Delpuech also took part in the Law Committee hearings in the Parliament, they gave their versions of the facts under oath, and the Paris Police chief openly denounced “unacceptable individual drift on the background of unhealthy cronyism.”

Whereas the Interior Minister left the opposition frustrated and more suspicious, comparing the Élysée security services to a parallel police. MP. Obono of LFI (la France insoumise) said: “It evokes dark hours when there would be a political police.” Referring to General De Gaulle’s  presidency that had the Civic Action Service, (le SAC), a parallel police that did not hesitate to “break back the bone of the opponent.” The LR Group President in the Parliament, MP. Christian Jacob, compared Mr. Benalla’s actions to the Barbouzes days, a parallel police force to fight the OAS, a far-Right politico-military clandestine organization created in February, 1961 for the defense of the French full presence in Algeria (l’Algérie-française) by all means, including large-scale of terrorism.

As a result, the opposition has called for a vote of no-confidence motion next week, applying the article 50-1 of the Constitution.

President Macron who was called France’s Obama, loves imitating President Obama’s communication and rhetorical speech style, wants to destroy France’s “old world” politics, and establish an exemplarity Republic. Thus the forgotten opposition that he might have thought was dead, has found itself very much alive in an asymmetric was over the Benalla “affair,” which neither the majority nor the opposition want, but which has become the turning point of his presidency — a serious imbroglio for President Macron’s political strategy, his vision for the next electoral deadlines and how he will reform the country and bring “France back” on the regional and the international stage.

Two weeks ago, the French were ecstatic with joy after the national team won the FIFA World Cup and French morale was never higher; the President capitalized a great deal on this popular euphoria only to have it end by abuse of power paranoia. According to a new poll on Tuesday led by Opinion Direct and BFMTV in the wake of this crisis, 80% of the French said: “They were shocked by the Benalla affair.”

Oddly, in the light of this political scandal, up to this point, there are analogical elements between President Macron and President Nixon. By now, the parallels between the two Presidents are neither logical nor ethical.

An analogy might shed light on President Macron’s approach to politics in the country, although painting him as President Nixon is not intellectually fair. The vast majority of Americans protested and vehemently contested the Vietnam War; and President Nixon’s partisan strategy toward the Democratic Party opposition which resulted from

Unlike President Nixon, President Macron — the candidate — ran his Presidential campaign based on a consensual platform to resolve France’s political diseases and restore the Republic authority and the country’s prestige. The promise he made in the Louvre’s forecourt landed in a toxic quagmire; his socioeconomic reforms and actions were extended to chase the struggling middle class groups in the deep country and by extension to the large cities’ beltway.

For instance, consider during “Water Gate” the ramifications of the direct and indirect actors; nevertheless, U.S. politics does not involve a multi-party ideology of the main powers. As France’s politics sought to contain bi-polarity so President Macron’s political culture, his paradigm, seeks to eradicate an ideology of radical political parties in the country and their threat to the Palace.

Politics is not always a pretty Madone painting in which only talented artists can explain the enigma and make it prettier. Above all, President Macron’s scandal strategy could be subjectively playing out a tragedy in the State hegemony, believing to clean up “old world politics” megalomania, but like President Nixon’s narcissism, the on-going Benalla story elements are synthesizing an ugly political scandal.

Politics is like life; one cannot choose his family nor fate, President Macron wants a Republic to go forward, but his special bodyguard’s caprices brought it downward.