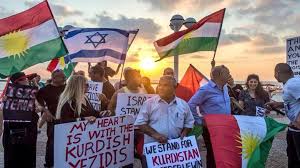 Despite all the reactions, the Iraqi Kurdish Regional Government (KRG) has made a concrete move with referendum at the beginning of last week to be an independent country. It is unthinkable that Barzani can not think that many variables, factors and actors can be affected if he declares  independence in such a troubled region. Even if Barzani was aware of the danger, he dared to take such an initiative or he took a commitment from somebody, which is yet unknown. Common belief is that Americans, and thus Israel, have advised Barzani to go on this road.

Founding an independent Kurdistan means making Israel a neighbor to Iran and Turkey, which neither will allow it.  As a response to Barzani’s decision, while Iran is ready to use its proxy Hashdi Shabi, Turkey is conducting military drills on the border. Economic sanctions are also waiting in line. For Iraq, it means loss of important oil resources together with one third of its land. Therefore, the government of Baghdad can not accept a Kurdish state.

Since Iraq and Iran are already hostile to the Barzani administration, Barzani’s negligent attitude against  warnings of Turkey was disappointing. For a long time Turkey has been looking after Northern Iraqi government like an orphan. Turkey gave weapons to Peshmerga to fight against DAESH. It also lent money to KRG government in order to get out of fiscal crisis. All these supports were the expression of Turkey’s being a friend of Barzani government. Turkish government’s opposition to the referendum is not because of hostility to the Barzani administration, but because of its goodwill and the damages it may incur to Turkey.

Despite all this support, Barzani looks acting opportunistically and take decisions that could lead to new chaos and wars with pressure of the US and Israel though KRG is dependent on Turkey. Let’s just assume that Barzani is right for insisting on independence. Could his rightness stop the danger on the door?

Barzani and his community could be conservative Muslims. However, if a conservative society and its leader relies on Israeli support for independence, tihs show they really don’t know Israel. Let’s presume that the Barzani Administration had to approach Israel because it could not find support from the Muslim countries. Will this excuse make Israel friendly to the Northern Iraqi government? Of course not.  Moreover, Israelis faithfully believe in that “Israel has no other friend than himself.” Therefore, they do not/wont regard Barzani administration as a friend.

Israel, as per Oded Yinon plan, has no other purpose except to dismantle and disarm neighboring Muslim countries  and to swallow when correct time comes. They never accept newly established small countries  to be ruled by a religious Muslim leader. Their support for Mesut Barzani today is not because they love it, but because they want Barzani to enlarge the fault line he broke.  Israel’s discourse that “Kurds have right to have an independent state.”  is misleading. If they are so fond of the freedom of Kurdish people, they must first withdraw from the Palestinian lands and recognize the independent Palestinian state. Israel’s only aim is to divide and weaken surrounding countries so that none of them can be dangerous to its existence.

On the other hand, if a Kurdish state is established in northern Iraq, Israel (and the US) will tolerate Barzani only for a maximum of one year. Subsequently, with an assassination, a corruption probe or an uprising,  Barzani will be overthrown and his ruling will be replaced by  a secular regime. Meanwhile, we should keep in mind that the US is not against the establishment of a Kurdish state. They just wait for the PKK / YPG to clear northern Syria from DAESH. Aftermath, they will establish a satellite Kurdish state on territories of Northern Iraq and Northern Syria.

Barzani is on a way that prepares his own end.  He must wake up and act with his only friend, Turkey. As for Turkey, it would be beneficial to avoid rhetoric and actions that will push the Barzani Administration completely to the arms of Israel and the United States and  maintain back door diplomacy  so that it will not be the only loser in the future.