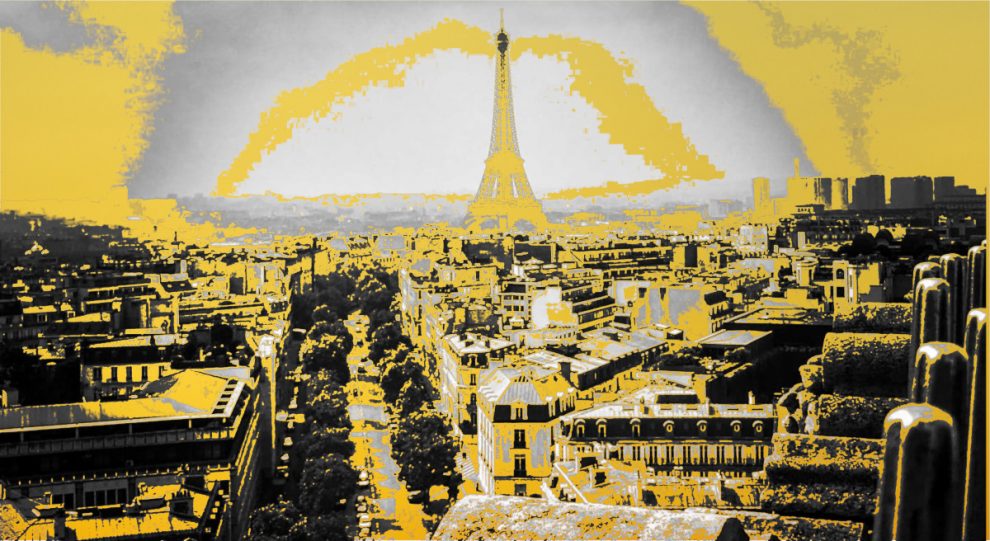 In a democracy, legality, electability and accountability are the foundation of a political party.

 French President Macron, in a conciliatory tone on Monday night, offered a minimum wage rise, tax-free bonuses and reversal of pension charge, yet the majority of the “Yellow Vests” protests have decided to continue their struggle. According to a poll 57% of the “Yellow Vests” aren’t convinced by the President’s measures, a President who also called for an economic and social “state of emergency.”
The government and the President want a rapid end to this crisis that has become a serious political headache. Tuesday night a deadly shooting occurred in the eastern city of Strasbourg, where The E.U. Parliament and the European Court of Human Rights are located; an early Christmas “gift” for the Executive, something for Ms. Le Pen’s far-Right Party (RN) to chew on, and the media. Having learned the killer is listed on the famous “Fiché S” (law enforcement flag on individuals considered national security risk), that he shouted “Allah Akbar,” (repentant terrorist’s phrase) when he attacked, many  jumped to the conclusion it qualified the criminal act an “Islamic terrorist” act.
As of this writing, the killer is still on the run, a 29-year-old from Strasbourg, Cherif “C” (Chekkat) known to frequent local Islamist circles, according to Paris AG Rémy Heitz in his briefing to the press on Wednesday.
Nonetheless, the popular uprising is gaining more empathy among the Right and the far-Right voters, whereas the radical Left is trying to capitalize on the revolt movement. But both odd radicals in the equation are insisting on fiscal justice.

A parallel narrative that marks the structure of this fuzzy sociopolitical current recalls the Tea-party movement in the U.S. The Tea-party movement surfaced on the public scene to protest the economic stimulus package, since its supporters appeared as the “voice” of opposition to President Obama’s public policies. They didn’t consider the Republican Party conservative enough. Hence, to block the Democratic agenda on the economy and health care reform, this movement made noise: later it had even political ramifications in mid-term elections in 2010.
The Tea-party movement ended its anti-tax campaign, Tea-party Express, in Washington D.C, comparing the U.S. fiscal system to a totalitarian system, the money collected however, going to finance the wars, medicare and social security.

While the political rhetoric of the militants among the “Yellow Vests” protest is directed against President Macron and his fiscal policies, the majority of the protests believe it is Brussels’ bureaucracy and imperatives that are the source of their socioeconomic misfortune; consequently they will push for candidates to run in next summer’s European elections to end Brussels’ dictate, and eventually aim to follow the British and go for a French-exit from the E.U.
This persistent sociopolitical uprising has become virulent and a ferocious opponent to President Macron. As a force it continues to demonstrate its anger against the President, the government, the political parties, the worker Unions, and the media because of their bias reporting and the system complaisance. Some of the militants have been questioning the President’s leadership. But what is this really? Is it a political party, a social movement, a lobby or just a group that is anti-croissant/crescent and anti-rive gauche arugula salad with blue cheese bowl?

According to a recent Viavoice survey the FHP (Federation of Private Hospitalization) has echoed certain claims of the “Yellow Vests,” which has revealed people living in rural areas are having difficulty accessing health care, more so than those who reside in the Parisian region. “The difference between the urban and the rural areas is obvious,” comments the President of the FHP, Dr. Lamine Gharbi. “I am in the north of Herault Department (84), Provence Region, and I notice year after year the doctors leaving the Department.”

The “Yellow Vests’ movement could be characterized as a political “third-way” in the next elections, and some “Yellow Vests” militants are already speaking about General De Villiers to run in 2022; others have already called to replace the President’s Prime Minister. General De Villiers, former Chief-of-Defense Staff, became popular in France, particularly among the far-Right and the hard core of the LR Party, after his clash with President Macron on the eve of the Bastille Day in 2017. His name was often cited to re-establish order and authority. White France loves its Generals/Marshals. “Nous voilà Maréchal!”
However, in a democracy, legality, electability and accountability are the foundation of a political party. By definition political parties require both a sustainable organization that is durable and seeks popular support through elections or “other means.”
The “Yellow Vests” is neither a movement nor a political party: it is a drone which operates through social media and in TV talk show studios, galvanizing troops and opportunistic politicians from the Right wing of the LR and the far-Right RN parties. The main mouthpieces of the movement are politicians deriving from les Républicains Party, such as MP Ciotti of Alpes-Maritimes.

The protests’ rhetoric is far from political centrism. The majority of French who identify themselves as “Yellow Vests” supporters tend to be white, male, married and older than 45. They hold more social and fiscal conservative views on issues than the Left and the radical Left of the LFI. They are also more likely to describe themselves as ultra-conservative; the leaders of the mosaic les Républicains Party have been timidly flirting with the protests; one wonders why? It’s because les Républicains lack ideas, a political platform, and leader, as that of the Left. Ms. Le Pen and her lieutenants have shown their loyalty or opportunism to the protests.
President Macron responded to the political crisis that has been striking for weeks, when he announced a series of measures aimed to contain the protests. The President said, “I take my share of this responsibility.” In response to the crisis, he unveiled plans aimed at improving the purchasing power of those who are struggling the most. He said that the government would increase the minimum wage by €100 per month without any cost to employers, and said that overtime work would not be taxed starting next year.
Despite the President’s U-turn in his speech to the nation, abandoning the fuel tax increase and boosting the purchasing power, a fifth consecutive weekend of demonstrations is planned. Opposition parties said the measures announced by the President aren’t enough; the “lefty” wing of the protests want to reinstate the contentious wealth tax, or ISF (impôt de solidarité sur la fortune), but there is nothing about the unemployed, there is nothing about part-time employees, there is nothing about pensioners, tweeted Jean-Luc Mélenchon, leader of la France Insoumise Party. “Civil servants are not taken into account, the students either,” he added.
Thus, because of the Strasbourg shooting on Tuesday night that left three dead and thirteen wounded, the government has decided to go to the highest level of emergency, said the Interior Minister. “This measure allows the implementation of reinforced border controls and strengthened controls on all Christmas markets in France to avoid the risk of mimicry.” he added.
The peculiar opposition of the radical Left, the Socialists, and the far-Right decided to postpone their call for Parliament dissolution by the President on Thursday — a semi-”national union oblige” in the light of the Strasbourg shooting.
How long will it last? For the President as long as the gunman is still on the run, the longer it takes the better. As for the phoenix opposition, notably the Right and the far-Right this is an electoral blessed white bread, if it turns out the killer is indeed a “radicalized” Arab-Muslim from the banlieue’s social housing buildings of Strasbourg.  As for the “Yellow Vests” Santa-claus is really “une ordure” (filth), and they keep enjoying crunchy croutons in their onion soup in a cold winter.

What happens if the UN opens an investigation on the Khashoggi case?
Re-rise of Nationalism
Comment