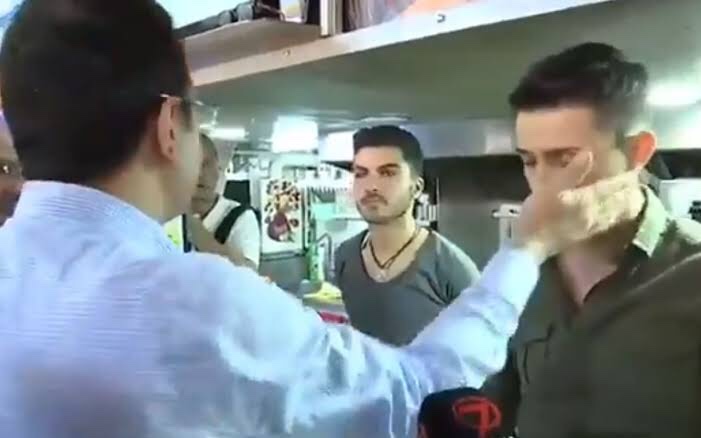 Mayoral hopeful Ekrem Imamoglu has been putting on a huge struggle to take Istanbul mayorship from president Erdogan’s party. He is very close to achieve that goal which was unimaginable a few years ago. Imamoglu has managed to gather support from voter bases far beyond his party’s constituency. However, re-run of Istanbul elections unmasked a huge anger management problem for him. It recently has gotten so much out of control that even one of his most staunch supporters, the anchor of Turkey’s most watched news, had to come out and criticize him.

Ekrem Imamoglu has been the mayor of Beylikduzu district of Istanbul from the main opposition party CHP. When CHP leader Kemal Kilicdaroglu eliminated all other nominations from his party and announced Imamoglu’s name as the candidate for Istanbul mayoral race, it raised some discontent within the party. However, the young politician proved those wrong and won support from different political backgrounds. He visited a lot of neighborhoods known for strong backings for Erdogan’s party, AKP. He was not afraid to face Erdogan’s supporters out on the streets in front of the cameras. His embracing attitude was hailed by many people but re-run of elections brought another persona or maybe the true one out.

Imamoglu held a rally in the Black Sea city of Trabzon during Eid holiday. On his way back to Istanbul, he and his crowded entourage attempted to use VIP entrance at the airport rather than public one despite not being entitle to it which caused a brief brawl. Camera footages recorded him saying the governor of the city was acting “like a dog.” In Turkish culture, it is pretty much one of the biggest insults one can ever make. The incident tarnished Imamoglu’s polished embracing image and created a huge backlash.

“This country belongs to all of us. That governor is our governor. His (Imamoglu’s) insult can not be accepted,” said Fatih Portakal, the anchor of Turkey’s most watched news and a staunch supporter of Imamoglu. Portakal host the evening news on Fox TV, an affiliation of Rupert Murdoch’s Fox network. Fox tv crew was also the only media crew at Imamoglu’s luxurious private jet covering Imamoglu’s trip to his hometown.

“This uncontrolled behavior signals for much bigger anger management problem,” says a psychiatrist working at a private hospital whom did not want to reveal his name fearing reprisal due to political conditions in Turkey.

Imamoglu had another breakdown last week when visiting Istanbul’s historic Grand Bazaar. One of the shop owners, apparently a supporter of Erdogan, reacted to Imamoglu only to find himself in the middle of a tense exchange. Imamoglu smacked the shop owner right before walking away angrily.

According to experts, this kind of behavior would only further polarize Turkey’s fragile social fractures. This is an extremely bad message to public from the Main opposition CHP which established its whole elections rhetoric on social coherence. The party’s election motto was “Everthing will be all right.”

Outburst of Imamoglu has not been limited to the public or state officials. Journalists have also had their fair share of Imamoglu’s anger problem even way before Istanbul contest. In 2017, a reporter from a private tv station was assaulted by Imamoglu’s body guards for apparently asking a question that he did not like.

A 46 years old Ankara resident who is an oil engineer at an international company perhaps had the most interesting comment on the whole Imamoglu issue. “Masquerade Ball is over,” he says. The ball was planned for until 31st of March. But re-run just dropped the masks, he continued.